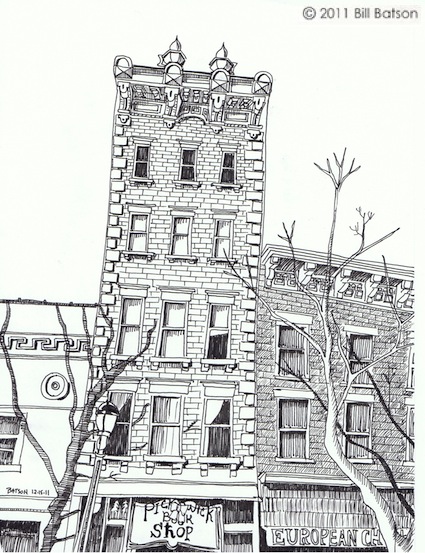 San Francisco has City Lights, New York City has the Strand and Nyack has the Pickwick Book Shop. The experience of shopping at Pickwick has changed little since it first opened in 1945. A seemingly infinite number of titles are crammed into a dense thicket of shelves. Books cover the floor and walls, arching as they approach the ceiling in ponderously tall stacks, in the way that trees canopy in a rain forest. At the center of this untamed landscape of literature is Pickwick’s owner, Jack Dunnigan.

Jack wears thick round glasses and sports a bushy white mustache. He has the air of a rumpled history teacher. He hovers above his inventory on a slightly elevated rostrum like platform. Behind him are hundreds of books bound with rubber bands that contain the names of certain customers. When you express an interest in a book not on the shelf, Jack makes a note and the next time you arrive you are handed the sought after volume.

Anyone who has been to Pickwick leaves with more than just a book. My drawing is an homage to the distinctive black and white bookmark created by John Richards that accompanies every sale. Richards created similar iconic logos for Christopher’s and the Hudson House. Jack estimates that he has distributed over 250,000 bookmarks since the first printing in the late 80’s.

The patronage of generations of residents has supported Pickwick, despite the proximity of bookstore chains at the Nanuet and Palisades Malls. I am one of those loyal patrons. I have been shopping at Pickwick since the early 70’s when I bought my first book with my own money: an illustrated version of Bram Stoker’s Dracula.

Pickwick is not just a local headquarters for bibliophiles. Jack divides his time between managing his shop and organizing the Art, Craft and Antique Dealers of Nyack (ACADA). First organized in 1971, ACADA sponsors three of the five street fairs that Nyack hosts annually. The events are so popular that they quadruple the population of the village for the day, bringing in revenue and establishing Nyack as a destination for epicureans throughout the region. The longevity of Pickwick would be sufficiently satisfying to most, but Jack has a restless interest in improving the fortunes of his fellow merchants.

Jack is driven by an appreciation for local history that is anchored in the bedrock of our community: literally. Jack’s family ran a brick works in Northern Rockland County. His family converted the brickyard’s watering hole into the beloved Dunnigan’s Bar & Grill in West Haverstraw.

Wanting to expand Jack’s intellectual horizons, Frank Dunnigan would bring Jack and his brothers to visit Pickwick at its original location on Main Street. Jack remembers the thrill he felt visiting the county’s only bookstore, named after the first novel by Charles Dickens. In 1975 Jack acquired the shop from Herbert Sperber. At the time, Suffern and Piermont had bookstores. Only Nyack has kept the doors of a local bookstore open.

City Lights won landmark status this May. We should move to landmark the spot where Helen Hayes signed books one Mother’s Day; where Frank McCourt attracted a mob on a cold Friday night; and where Carson McCullers was spotted hunting alone for reading material. The commercial viability of Pickwick is more than just a matter of picking sides between national vs. local bookstores, or cyber vs. brick and mortar book shopping. If we fail to support one of Nyack’s most distinguished businesses, we risk becoming indistinguishable from other communities ourselves.