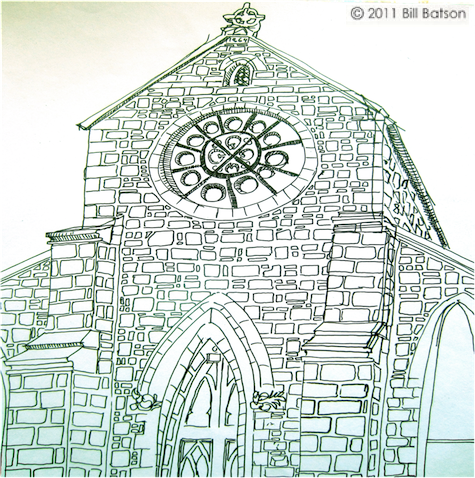 At the end of this month, Grace Episcopal Church will conclude the celebration of 150 years of worship. A building that survives nearly 150 years had to be expertly designed and constructed from the best materials. When a church celebrates a triple jubilee, generations of dedicated congregants served as a sturdy foundation and the founding rector, a visionary architect. Latent fingerprints from the church’s founder, Franklin Babbitt are detectable on the stones that form the building and a special plant in the garden.

When Babbitt crossed the Hudson on a sailing sloop from Tarrytown in October 1861, some considered Nyack “an old Dutch place about fifty years behind the times.” At 32, Babbit swiftly cobbled together a congregation. Two weeks after his arrival at the Burd Street dock, he held his first service and by the end of the month, he presided over a formal meeting where the parish was incorporated.

Babbitt was as much a creative force as a spiritual one during his 56 years as rector. In the early years, he played the roll of organist and choirmaster in addition to his duties as rector and sexton. The greatest legacy to his artistry however, and the enduring symbol of his organization genius is Grace Church itself.

After building the first Grace Church for $77.49, the congregation outgrew their humble wooden accommodations. As an ardent student of ecclesiastical architecture, Babbitt was determined to construct a church that would rival the finest European sanctuaries. Answering opposition from the more frugal and less aesthetically inclined members of the parish, Babbitt declared, “The very building itself will inspire all whose hearts are open to holy inspiration. It is what a church ought to be.”

During the construction phase, several services were held in a roofless sanctuary during storms. There were also memorable debates over everything from brick versus stone to pay-as-you-go versus obtaining a bank loan. Stones and the bank loan prevailed.

It took 14 years of financial struggle before the church was consecrated on May 30, 1882. Those with reservations must have had to concede that Babbitt’s vision was divinely inspired. The building functions like a hymn by Handel or a painting by da Vinci, transporting those who experience the church to a more ethereal plain.

The current work of the ministry at Grace is as inspirational as the story of the founder and his architectural legacy. There are many wonderful community and cultural programs contained within its stone and stain glass. The music program has four choirs for the flock and produces events and festivals, including the annual Welles Crowther Concert of Remembrance that draws audiences from across the region. The social ministry at Grace provides food and shelter to the homeless through Helping Hands during the winter and the church accommodates 29 different 12-step and recovery programs.

I visited the church for the first time when my niece attended Amazing Grace Circus, a youth art and fitness program, which is also celebrating a significant milestone. The program was created ten years ago during the emotional abyss that followed September 11th. The youth circus has now touched the lives of thousands students and families through programs in public and private schools and an after school program at Grace. I completed this sketch while waiting to pick up my niece from their other popular program, Circus Camp.

Near the front doors depicted in my drawing is a tree covered in ivy. The creeping plant grew from a cutting that Washington Irving gave to Babbitt. As I recently stood in the garden contemplating the time traveling vine, I met the church’s current choirmaster Robert Burrows. Burrows told me a story worthy of Irving. Apparently, Babbitt laid on his deathbed in the parsonage in a corner room, yards from where we stood, listening to the choir practice his favorite Hymn “I Heard a Voice in Heaven.” Babbitt requested the rehearsal to make sure the choir mastered his selection for his imminent funeral.

Grace will start their 151st year with a new leader. Father Richard Greesle will give his last sermon on January 1, 2012. Like Babbitt before him, Gressle leaves an institution with the vitality and momentum to carry on for another 150 years of worship and service.

Additional information is available about GraceMusic, Helping Hands of Rockland County, the Amazing Grace Circus and the Welles Remy Crowther Charitable Trust at their respective Websites.