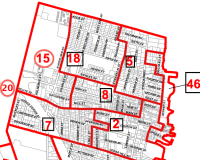 Nyack, Nov 9 — Challenger Jen White (D) defeated incumbent Richard Kavesh (I) in Nyack’s mayor’s contest last night winning 63% of the vote, according to unofficial results from the Rockland County Board of Elections. White received 877 votes to 515 votes for Kavesh.

Shirley Lasker (D) and Frank Borelli (R) have been re-elected to the Clarkstown Council with 23% and 21% of the vote respectively. Alex Gromack was re-elected as Town Supervisor with 64% of the vote.

In county-wide races, Louis Falco will be the next Rockland County Sheriff, having received 45% of the vote. Sherri Eisenpress won the Family Court Judge job with 48% of the vote in a three way race.

Nyack voters re-elected Doug Foster as a trustee and returned Marie Lorenzini to the Village Board. Lorenzini previously served as a trustee but gave up her seat to run for mayor two years ago. Both were unopposed.

The current Nyack mayor called the mayor-elect at about 10:15p to offer his congratulations. “Jen and I have argued our differences, many of those differences remain, but Jen has prevailed,” said Kavesh. “I want to thank the most loyal supporters in the world for all that they’ve done to sustain me during the 11 years in which I have had the honor and the privilege of working for the people of Nyack.” Saying “what unites us is our love for Nyack,” Kavesh offered to work with White “to make sure that Nyack continues to succeed during these challenging times.”

Advertisement. Scroll to continue reading.
In this article:Politics/Elections, Village Hall