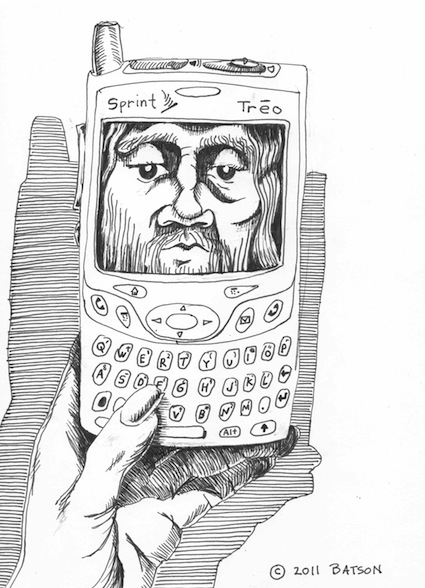 I recently pulled a Rip Van Winkle.   I did not touch a computer keyboard or cell phone from 2007 until 2011. As a resident of a village in the region of the world depicted in Washington Irving’s immortal short story, I embrace my kindred spirit Van Winkle.  Skipping five years of technology in the 21st century isn’t so different from Rip Van Winkle’s 18 year hiatus during the 1700’s.   The Nyack Sketch Log requires an immersion into the strange ways of this new era of connectivity.  Ironically, The Sketch Book of Geoffrey Crayon, Gent., where Irving first published his story of the Hudson Valley hermit, is helping me surf this time warp.

In the years before I unplugged, I was a profoundly busy and public person, engaged in both activism and art.   Interactive media was my friend.  I had served elected officials and civil rights organizations as a press secretary. In fact, it was with reckless self-confidence that I used a computer to launch my political career.   As a press aide to the New York State Democratic Delegation to the 1988 Democratic Convention in Atlanta Georgia, I was asked to produce our daily newsletter.  I agreed to the assignment before I was shown that instead of a typewriter and Xerox machine, I would be using a computer, an instrument I had never touched.

After 20 hours of non-stop work, I completed my first draft. My work ethic was the immediate stuff of legend, but if I had known what I was doing, I could have completed the project in four hours.  The fact that I had the stamina for a marathon session of trial and error gave me what I suspect many early computer aficionados enjoyed;  the mystique of mastering something that seems difficult but is actually simple if one took the time and sweat to figure it out.

My break with technology occurred with a slip, a splash and a moment of horror. While painting a condo with my ex-wife before putting it on the market, I leaned over a can of paint and watched my brand new Sprint Treo slip from my shirt pocket and disappear into the acrylic soup. The last sound it made was kerplunk, the sound a $700 Treo makes as it turns into a worthless blue brick. Although I quickly replaced it, I never got much use out of it.  Several months later, I left New York, leaving behind my Hotmail address and my Sprint phone number.

Jump cut to Nyack, 2011.  The people and circumstances that can re-animate a moribund life converged and I found myself wanting to re-connect.  I had the stiffness that racked Van Winkle’s body from years of disuse as he made his way down from the Kaatskill Mountains (sic), but it was my social, not physical muscles that had atrophied.  I still had my Treo, but I found it as useful as Van Winkle’s rusted musket.

To be connected to friends, family and work associates in 2011, you need to have a presence in the new town square:  social media.  When it comes to Facebook and Twitter I feel like a rube, unaware of the customs and mores. When Rip and I stepped out of the frame, we were both ruled by a George: his King George gave way to George Washington and when I got back on line, George Bush had been replaced by Barack Obama.  In this one comparison, the transitions seem of equivalent historic significance.

Nyack Sketch Log has been my way to reacquaint myself with both the physical and virtual worlds.  For me, Nyack is an ancestral home.   The landscape of the village that I sketch provides the same comfort for me that one receives from the contours of the face of a familiar old friend.  For Rip Van Winkle, after an interval of suspicion and disbelief, the villagers embraced the returning eccentric.  My experience has been identical.  Like Van Winkle, I pine for the village that I knew as a child, when being social didn’t involve media.  I had my first egg cream at Jerry’s soda shop on Main Street; I bought my first bike at De Jung’s on Broadway and my first book, the illustrated version of Bram Stoker’s Dracula, was purchased at Pickwick Books.

Essayist Michael J Cummings says Washington Irving sees real change as ‘€œan amalgam of the old and new.’€  Hopefully, Nyack Sketch Log validates that theory.  My Treo has been replaced by a T-Mobile Galaxy S II.  I use this hi-tech gadget to transmit my old-fashioned handmade low tech drawings.  Hi-tech/ low-tech mash ups demonstrate, to my mind, generational harmony.  My favorite example of the merger of modern and ancient is the digital radio with the hand cranked battery.   Human progress can be threatened by a culture of stagnation or disposability.  Truth be told, Irving’s tale was recycled from similar accounts of many cultures: something old, made new.  The plot device of an avatar from the past in myth can be a useful literary device to transmit information of timeless value.

I was shamed into joining Facebook by a friend who thought my absence from the social media platform was evidence that I was over 50.  Her remark, and her estimate of my age were way too close to the truth.  In the 21st century, to stay young and stay connected, you get to stay home, login in and post and tweet. I’ll leave it to you to decide if social media is also social progress.

My first tweet, using the Twitter hash tag #RipVanWinkle, will coincide with this post. My twitter handle is @nyacksketchlog.  My younger self was comfortable with this clumsy feeling that is overcoming me as I take my first strides into a new media landscape. People my age wish to avoid bumbling about in public.

Even more problematic for the twitterverse is my generation’s tendency to be long winded.  I hope I can make my point in less than 140 charact