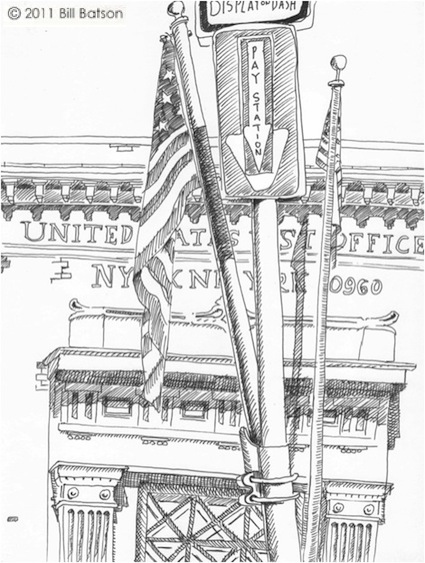 It might seem like a strange place to park my patriotism, but the Nyack Post Office is one of the reasons why I love this country. On July 4th, I set out to find a symbol of our constitutional democracy and completed this drawing under a blistering mid-day sun. Now, several months later, it is high noon for the United States Postal Service.

Have you noticed a heavy rotation of television commercials promoting the postal service? When you combine the aggressive snail mail public relations campaign with news reports that the USPS is near bankruptcy, it begs the question: could we go from 10960 to zero?

My sentimental proclamation of fidelity to this federal outpost could be easily dismissed as nostalgia. As I sat on a bench in front of Art CafÃ© drawing in the steamy summer heat, I was overcome with memories of playing on the wrought iron banister as a child while my dad retrieved his mail.

When the weather was not conducive to sliding down the rail, I would join my father inside on his daily postal errand. Through the portal of the heavy metal doors, I was introduced to a narrative, no matter how flawed, of how we became a nation, and a notion of a vast country that we were connected to through the post office.

Sometimes I would check out the FBI’s most wanted list. I remember being asked to be on the lookout for Larry Davis, a fugitive from a 1980’s shoot out in the Bronx with police or the Unabomber, depicted in a composite drawing. I can close my eyes and still see the visage of a deranged terrorist in a hoody and dark sun glasses captured by the FBI’s sketch artist.

I would also get lost in the epic tale of the Work Progress Administration mural that graces the wall of our post office. To be just, the complex themes of revolution, manifest destiny and emancipation that are central to the mural, and the brilliant execution of the artist Jacob Getlar Smith are too compelling to be treated as a sub-topic. The Nyack Post Office mural deserves its own sketch log entry.

During the fall months of every election year since my halcyon days, the sidewalk in front of the Nyack Post Office has been staked out as invaluable meet and greet turf for political candidates. In the effort to press the maximum amount of flesh, the post office steps are a magnet for would-be office holders. Activists are also hip to the advocacy potential of our postal civic center. The last time I dropped off a letter, I was enticed to add my name to a petition protesting hydro-fracking.

In 1988, our post office was added to the National Register of Historic Places, so as an edifice, it will probably endure. The fact that it was renamed in 2003 for the men slain in the Brink’s Robbery ‘€“ Brown, O’Grady, and Paige — gives the structure a sacred status in our community. The future of the building seems secure, but will the letter carriers that labor inside survive the decade?

The post office is a perfect symbol of the state of flux we are in as a society. As with countless other industries, technology is making many of the practices and personnel of the post office obsolete or redundant. Yet, by virtue of its constitutional charter (Article 1, Section 8, Clause 7) the post office is not so easily dismantled. The fact that members of Congress enjoy the franking privilege of free postage gives the institution additional inertia.

According to the National Association of Letter Carriers, a bill passed by Congress in 2006 has burdened the Postal Service with the onerous requirement of pre-funding $21 billion of retiree benefits. This just happens to be the approximate size of the deficit that threatens to bankrupt the agency.

Using what the union calls a ‘€œmanufactured crisis,’€ Representative Daryl Issa (R) California, has sponsored HR 2309 that would place the postal service in receivership, which would effectively dissolve the agency’s union contracts. Ralph Nader and other postal service advocates say if Congress would simply let the USPS out of its obligation to pre-fund pensions the agency could balance its budget.

I admit that I hit the email send button a thousand times for every one letter that I walk through the doors of the Nyack Post Office. Maybe a 21st century PO could reinvent itself developing an online email service to send personal and financial information safely and securely or becoming an all purpose depot for small businesses that want to compete in the global world of eCommerce.

Whatever happens, this building should always be a place that promotes the general welfare. Even though bits of data have replaced bundles of letters, the American people still have an interest in maintaining a universal system to distribute information.