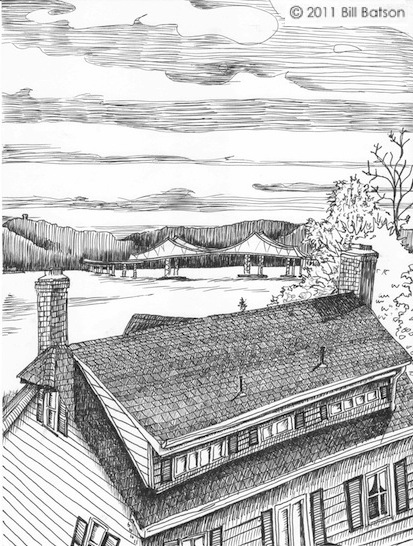 In this sketch, The Tappan Zee Bridge seems to hang above the house as it does metaphorically over our village. With hearings beginning on October 27 at 4p in the Adler Room of the Palisades Mall for the Tappan Zee River Crossing Project, our fate is literally up in the air. The outcome of these hearings will greatly impact the quality of our lives, so as frustrating as it may be for those who went through this in 1955, it is very important that we all keep our eyes on the bouncing bridge.

When I first caught glimpse of this particular view of the bridge I was intrigued. When seen dangling above a roof top, the mighty Tappan Zee is less imposing. I have seen the bridge from the shore, from various approach roads, even from the air when on a flight descending into La Guardia, but never sandwiched between a home and the hills of Westchester in the distance. I came to this roof deck to draw the bridge because everywhere I go in Nyack; the talk these days turns to the bridge. But when I finished the drawing, even though my thoughts had been singularly focused on traffic, pollution, mass transit and displacement, the bridge in my drawing shrank in scale.

Maybe the Tappan Zee Bridge is the civil engineering version of the starter home: a structure that can only accommodate the modest demands of a small commuter family and must be abandoned when it can no longer meet the needs of its newer sprawl-driven users. If the Tappan Zee Bridge is really too weak to endure or too small to ease traffic, the fact that the original plans for the bridge were short-sighted should not condemn us to accept a quick fix. Neighboring communities and regional commuters are owed a comprehensive solution. If government panels and engineers can invest hundreds of millions or billions on temporary projects that cause permanent upheaval, why should we be so timid when constructing our counter-vision? Certainly, our plans for how to spend a few billion can’t be any worse than the schemes of the team who built a disposable bridge?

My light, color and design teacher in Art School would start her first lecture of the year lamenting that Manhattan would someday disappear. Mary Buckley would tell us that the amount of earth removed from most construction sites was often heavier than the structure built in its place. Eventually, she concluded wryly, the island will float away. Her apocryphal theory helped young artists break the fetters of conformity and explore the infinite world of imagination necessary to make great art. That same mindset might be helpful to the residents of the Lower Hudson Valley as we confront the prospects of Tappan Zee Bridge 2.0.

Local residents on both sides of the river and regional advocates for local mass transit are digging in for a fight. Despite the fact that nine years of public comment supporting mass transit has been unceremoniously disregarded, we do not have the luxury of turning our backs on this process. The next phase of this project will not last nine years. The dynamic will shift from substance to theater as the pace accelerates toward ground breaking. We will need to employ the talents of performing, visual and literary artists to capture the attention of the public through the media. We need to shame and embarrass those responsible for this project who have ignored our legitimate demands. Think big, like a banner that actually spans the river, or our chances of winning this final battle are very small. This sounds like a job for Christo.

If we are told that the only option for a new bridge is more car lanes with no bus rapid transit or light rail, we should suggest that we build an elevated public park connecting Westchester and Rockland with a lower level for vehicular traffic. Which plan is more outrageous? If a plan moves forward despite the overwhelming objection of the public, we might consider starting a movement to #OccupyTheHudson and launch a flotilla of small human powered craft to protect our waterfront, our river and our interests. Which action is more democratic?

I started out to draw a picture of the Tappan Zee Bridge, but half way through the sketch, my perspective shifted. This is not a fight about transportation; it is an existential battle for the future quality of life in Rockland and Westchester. The bridge is tiny in importance next to the air that surrounds it, the water the runs beneath it, the landscape that it artificially connects and the homes and human lives that it haphazardly hangs over. Of all the elements in my drawing, the bridge is the least important. We dare not let the least important element in our environment permanently damage the delicate eco-system and the fragile human lives that we all revere.