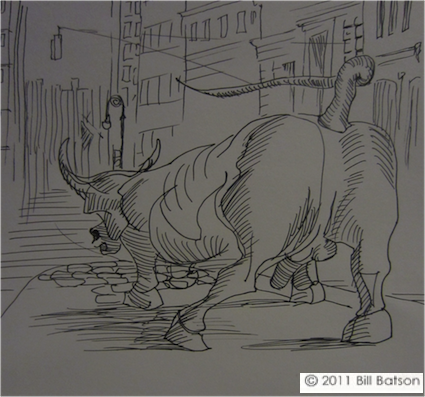 Since the Occupy Wall Street demonstrations began three weeks ago on September 17th, the size of the crowds has grown as well as the arrests and police disruptions. The story of the protests now often leads national news broadcasts. In Pamplona, the bulls run down the people. In Lower Manhattan, the people have the bull on the run.

The demonstrations are also getting the attention of a new generation which often spends more time on social media than social activism. A recent New York Times article reported that American students are becoming increasingly ignorant of the basic history of the civil rights movement. Whether these young people are aware of it or not, they are channeling some of the best organizing traditions of key civil rights groups like the Student Non-violent Coordination Committee (SNCC) and the Southern Christian Leadership Conference (SCLC). There seems to be a strong democratic instinct in the youth of America that flexes its muscle at critical moments in our history.

Some have complained that these protests lack organization and clear objectives. This ambiguity is an intentional expression of the anti-hierarchical philosophy of today’s activist culture. News reports of the occupation and the web sites that carry dispatches from those occupying Wall Street describe a spontaneous gathering of diverse individuals, not a formal organization. That they are not advancing the interests of any organization should be refreshing. They are conducting themselves like Athenians asserting their rights to a direct democracy or early American colonists rising at a town meeting: it is simply their American citizenship that defines and unites them; no other allegiance or affiliation is necessary.

Previous generations of activists needed formal organizations to harness the resources to influence public opinion. In Montgomery, Alabama in 1955, people needed the mimeographs and pulpit announcements of the church to spread the word of their bus boycott that sought the right to integrate public accommodations. The sponsors of the March on Washington needed the organizing expertise of labor unions to assemble a demonstration large enough to compel the government to extend and protect voting rights. Today, the internet provides the communication and logistical support needed for a mass mobilization without the need to surrender the agenda to large institutional partners.

Already the protesters can claim a significant victory. For weeks, the only national conversation about our economy was a drum beat of conservative calls for austerity. Now, the brave actions of these protesters have us debating what responsibility the banks have in our current fiscal predicament and what sum of money they must contribute (return) to achieve our national economic recovery.

As the protests become more impactful and direct action campaigns spread from NYC to Boston and Los Angeles, there will be a crackdown. Ironically, the first attempt to suppress dissent with pepper spray on September 24th back-fired when the video of the assault went viral. The incident probably increased both the ranks of the demonstrators and their sympathizers. But that will not be the last counter-offensive from those in power who are embarrassed or threatened by these protests. I suspect that some of the cell phone and internet service jamming technologies employed in Egypt, London and domestically in San Francisco will soon be deployed in lower Manhattan.

A few weeks ago, New York City’s Mayor Michael Bloomberg predicted Arab Spring style demonstrations on the scale of the Occupy Wall Street action. Days later, he tried to walk back those prescient remarks by suggesting that the real victims of these protests are 40k-per-year financial sector support staff. Bloomberg then suggested that on behalf of the working class, we rally to support, not challenge the banks.

As major labor unions plan to join the Wall Street occupation in earnest on Wednesday, it is obvious why the Mayor is frustrated. Even though he saw this event coming, I don’t think Bloomberg thought the mobs in the streets would be predominantly middle-class and white, a group that his police cannot brutalize without the blow back we saw from last week’s pepper spray incident. His handling of this event is beginning to look like his slow motion response to the blizzard of 2010. One might worry that he will eventually over-react to the demonstrators to save face.

The genie however, may be out of the bottle. With a European debt crisis threatening to push our economy back into recession, the public is now returning its fickle attention to the culpability of Wall Street power brokers for the 2008 global financial collapse. Americans are revisiting questions about what happened to the billions of public dollars invested into Wall Street companies and asking that individuals who once enjoyed anonymity and impunity be held to account for peddling in fraudulent financial instruments. Just keep in mind that if Greece collapses and brings down the European and American economies, it was Lloyd Blankfein’s Goldman Sachs that helped the Greek government hide its hemorrhaging debt from other banks and Euro zone governments.

Recent events have demonstrated that when Wall Street catches a cold, Main Street gets pneumonia. Just two years after the government of the United States bailed out major investment banks, saving them from self-inflicted wounds that almost bankrupted the country, the financial service sector are in excellent shape. Actually, profits in corporate America in general are back in the black; but on Main Street in Nyack and in small towns and big cities across the country: not so much. In our current economy, the people’s fortunes do not necessarily increase in proportion to corporate profits and corporations feel no pain when the American public suffers.

Our modern economic paradigm reverses the ancient ritual where the tribe would sacrifice the bull. On Wall Street, the Bull sacrificed us. Let us applaud the Occupy Wall Street activits willing to jump into the ring and fight the metaphoric bull of Wall Street: I say Ole’.

Artist Bill Batson, an activist and former NYC resident, creates up to five sketches and essays each week curbside in Nyack, NY.