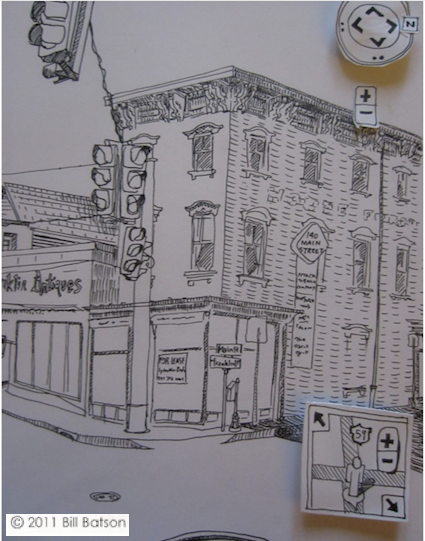 These drawings are my training camp for this far more ambitious campaign. Eventually, I would like to expand Nyack Sketch Log to accommodate a universal streetscape depiction of the village. Presently, I am working my way up to the task. Like John Henry, who spent years slamming a steel hammer onto a steel spike, I am building momentum by dragging a black pen across white paper that I will need to rival the computer-generated version of reality. I am not yet a virtual cartographer. I still select my subjects randomly and out of sequence.

Eventually, I wish to surrender serendipity and assume the methodical attitude of the machine. I may have contempt for the impact of the machine on certain aspects of our culture, but I also respect the cold logic of these devices that are ultimately an invention and reflection of mankind. Unlike their creators, machines don’t tire like a frail body or lose focus like an undisciplined mind. The beauty of a computer or a camera is its universality. Machines won’t linger on objects that they like, avoid what they abhor or bounce around like a human mind rebelling against the monotony of discipline. Machines finish whatever they start, maintaining the highest standard of excellence.

But as the high fashion world knows all too well, imperfection is an essential part of human beauty. When my mother had a set of teeth made for her recently, the dentist warned that the final mold had to be imperfect. If a dental implant is composed of teeth that are too symmetrical, the human eye senses that they are false teeth. Subtle variations and asymmetry distinguish the creations of nature from the fabricated output of a machine.

As unyielding and unerring reproducers, machines make duplicates, never originals. Every structure that I record, manually, through my sketch log was constructed by human hands. Handcraftsmanship imparts a human spirit into an object. The absence of the human hand is what makes Google Maps a relative to the steam powered drill of John Henry legend, and henceforth, my adversary. The Google Map will always be superior to my super-sized sketch log as a navigation tool. But as an archive of our collective time on the planet, I believe the artistic record reigns supreme.

We have reached the tipping point in our relationship with the machine. During the summer you can see people use mechanical equipment to groom their yards and gardens, hogging energy that is not renewable and ignoring an excellent opportunity to engage in some cardio. If you drew a bar graph describing the shortening of the attention span of modern man, how steep a line would you have to draw to connect the hand written letter to Twitter?

In a culture where machines do the physical work, will people become soft? In an era when machines perform all the mental work, will people become vapid? Could we reach a point in our society where we become as dependent on our machines as a critically ill patient is on life support? What would happen if our plug gets pulled? Will the dynamic eventually shift making the machine the operator and the human the tool?

A phenomenon I observed while traveling overseas illustrates the limits of mechanical reproduction. When you attempt to use a camera to take a picture of a person in some parts of the world, you risk an indignant assault. Some cultures view the mechanical lens as at best an intrusive instrument, at worse a soul thieving contraption. But when you approach the very same party with a sketch pad, the results are radically different.

In a Masai Village in Kenya, the act of sketching created two crowds, one watching me draw, the other waiting to pose. When I started the Nyack Sketch Log, I thought that I would get run off of peoples’ front lawns as a trespasser or suspected peeping tom. But like my experience in Kenya, the opposite has been true. The act of drawing from life seems to soothe the jumpy modern soul.

I know that without a computer and an Internet connection I could not transmit this screed. Would John Henry have turned down a ride on a locomotive on his way to his fateful duel? The point of this exercise is not to win outright or without contradiction. I simply wish to demonstrate a muscular humanity that will allow human values and frailties to persist in an increasing artificial world, whether through legend or artifact which in this case will be a hand drawn map.