Local artist Bill Batson thinks Nyack is a sketchy place — literally. Inspired by the public art events of Hopper Happens, he has spent the last several months sketching the village. 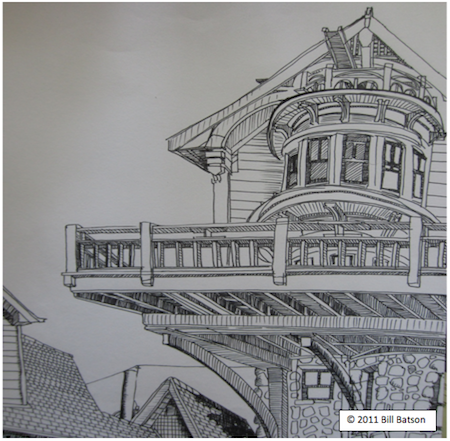 When I draw a building, the inhabitants are mostly strangers to me and the people who built the structure are like phantoms who interact with us solely through their creations. If it’s an official structure, the name of the builder is on a corner stone, but typically, residential dwellings aren’t signed. Unless it is the work of a renowned architect, the identity and the vision of the builder is unknown. When you see the house above on Catherine Street, you immediately want to know who built it and what inspired them. I was lucky. I recently met the architect and builder. This house was built by Vas.

Vas is intense and muscular. He looks like a person who makes his living with his hands, and talks with the passion of a fine artist or philosopher. From what I can gather from the scraps of the personal history he shared, Vas was born in China to Russian parents and has traveled extensively in Asia and Latin America. His exposure to these diverse cultures at an early age seems to have made him eclectic to the bone.

When I first met Vas; I was drawing on the corner of Main and Broadway. He stood over my shoulder for a while as I drew and then said he loved my lines. I complained that none are ever as straight as I would like them to be to which he replied ‘€œstraight lines ruin everything.’€ When you see his house on Catherine Street, you will see that philosophy in 3D.

Vas requires masons that work on his projects to put away their plumb lines and to only use stones that are uncut and raw. To Vas, a stone shaped into a rectangle or square is an affront to the life force that made the material. He believes that rough stones take their beholders on a journey, whereas cut stones lull us to sleep like wallpaper. Vas wants all building materials to have lives of their own. He prefers unfinished wood that is allowed to age, deepening in color over time, offering the eyes and the nose a rustic bouquet. His flooring avoids overly symmetrical designs, preferring exploding patterns that radiate outward in irregular waves. His chimney climbs skyward like a thin billow of smoke; its form making stone appear as light as air.

Of all the houses that I have drawn, this was the first I was invited inside to see. I entered breathlessly, uncertain as to what the interior of such a bold faÃ§ade would reveal. There are so few right angles, you feel as though you are following the curves of a subterranean tunnel. The foundation and lower floors of the home are built into the side of a hill, refrigerating the air. The stairways are steep, but wide. Vas calls them old man steps: broad enough so you can put your full weight on your entire foot with each vertical stride. The living room was shaped to accommodate a piano; the cabinets in the kitchen are handcrafted from wood taken from a century old barn; and the attic is a theater where his kids produced plays.

Currently, the house is vacant. A fire forced the family into a nearby rental. But it is by far the most vibrant empty house I have ever encountered. It has life in every crevice and is calling for the family to return. Even though the financial burden from the fire and displacement are enormous, Vas has not turned his back on this piece of residential sculpture. The building seems to continue to grow; organically. The house wants the children back. It doesn’t like its theater dark.

Our conversation transcended residential construction. Vas looks at land use the same way he does masonry; public projects need to be designed to mirror the infinite forms of nature, not reflect the limitations of the mind of man. To illustrate his point, he invited me to take a brainstorming drive through the village. He pointed to the slope that tumbles down to meet the river and described underground garages with parks on top. When we get to the Hudson he proposed bridges with balconies spanning the inlets with gondolas trolling the river bank.

My imagination was ignited by Vas. I let my mind wander and incredible ideas emerged: I saw Memorial Park break the fetters of the shore. It expanded out into the river, supported on pontoons and in the middle of this floating park,  there was a brightly colored permanent circus tent large enough to see from outer space. I thought of the stunning super trees of Singapore, arboreal shaped towers of steel, creating a skyline of vertical gardens. The silhouette of skyscraping trees would make Nyack a must see for the eco-tourist.

When Vas and I first met, I had just started recording the man-made landscape of Nyack with my sketch pad and pen. I was concerned that I was not doing the buildings justice, being unable to capture the exact angles in the architecture I depict. To Vas, my renditions of the buildings were improvements. Where I saw a shaky line, he saw movement and breath. Facing the corner building that houses Back to Earth and the New Age Center, he drew my attention to a tree and says ‘€œGod makes trees, people make buildings. There are no imperfect trees, but many imperfect buildings.’€

If you compare an organic object with something man made, there is one obvious difference. In nature, straight lines do not exist. Even though engineers and the authors of building codes rely on the form of the square and the box to guarantee the structural integrity that keeps us safe and secure, our cultural adherence to the straight line is dubious, and probably more of a function of the limits of finance than of imagination.

The builders of one of the longest free-standing man-made structures on the planet, the Pantheon in Rome, have proven that arches and vaulted ceilings are the most durable designs. I would also argue they are the most aesthetically pleasing. The contours of the female and male human form, flora and fauna, oceans and mountains, the totality of what surrounds us and the organisms that support life are composed almost exclusively of curves. Houses like the one that Vas built celebrate this fact and remind us that those ideas and objects that resonate the most and last longest are conceived in partnership with, not defiance of nature.