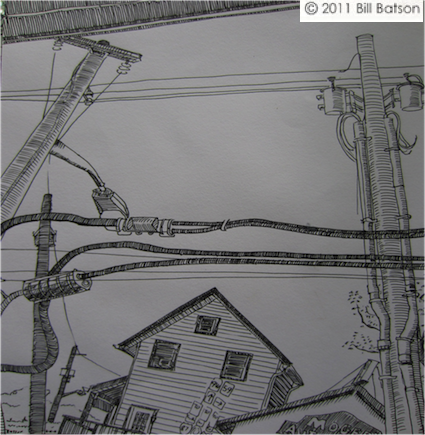 People who ignore the symptoms of hypertension are living on borrowed time. Along the same line, societies that neglect their infrastructure are just as reckless and similarly imperiled. Like the bulging veins of a person with high blood pressure, even more pronounced in red and blue relief when the arm is flexed from stuffing one’s mouth with more artery clogging chow, power lines are always visible and constantly overlooked. On August 28, 2011, our bloated and chronically ill power delivery system failed. So now that the lights are back on, is any one home? Will we go to the infrastructure doctor, the civil engineer, before it’s too late, or will we ignore all the warning signs and let the power grid that insures our personal and economic health and safety collapse the next time a mighty wind blows?

I became obsessed with our local infrastructure before hurricane Irene rang our collective clock. I have completed 46 drawings of the village and all but one contains a prominently placed utility pole or wire. This is not by design. This is our reality. This drawing was originally intended to be about Moger’s Auto Body Works. You could say it got lost in the weeds of our jury-rigged power grid.

We are surrounded and I would argue connected to each other by a fragile web of power, transportation or communication cables. Look out any window of your house: this matrix we can see without taking a red pill. What we believe to be our bucolic setting of trees and quaint homes is replete with the sinews and tendons of our public utilities. And if you are one of the few who have a vista free of dangling junction boxes and leaning towers of transformers, the fact of their proximity is inescapable. The fixtures and appliances in the room where you sit and the computer that you are using to read this essay are the constant proof that we are all wired to an elaborate public utility grid.

Belaboring this obvious truth is unfortunately necessary. Despite the fact that millions of consumers of energy in the Mid-Atlantic and New England regions of the United States walked in the shoes of the third world for a week in some cases in the wake of Hurricane Irene, chances are our habits of over consumption of consumer electronics and under investment of public utilities will go unaltered. Even the irony that our blackout was caused by one of the violent storms that scientists predicted would be the result of our over-reliance on fossil fuels seems lost on us. Our energy gluttony is threatening our energy gluttony. Who said Mother Nature doesn’t have a sense of humor?

Think of our electric grid like a bridge built in the 19th century. When the first suspension bridges, like the Brooklyn Bridge were built, ground transportation was accomplished by horse, cart or foot. After the invention of the car and the growth of suburbs and a national network of highways, lanes had to be widened, levels added and new bridges built. Well, we have a 20th century electrical grid and a 21st century appetite for power. We have built an information super highway without upgrading our electrical roads and bridges.

As much as some bemoan deficits, our infrastructure deficit could lead to national ruin. Each year America’s growing population increases the demand for power by outfitting every room in every dwelling with its own computer, plasma television and air conditioner. Yet our power grid is not keeping pace. Some street corners, like the one I sketched, look like an electrical outlet in a college dorm dangerously overloaded by adapters and surge protectors serving too many Xboxes and toaster ovens. This is a recipe for more blackouts, and with climate change influencing weather patterns, disaster.

Utilities and infrastructure are the ultimate public paradox: they are both omnipresent and universally ignored. What was impossible for me to ignore was the fact that without electricity, my elderly parents were at risk of serious injury or death every minute the lights and telephones didn’t work. What we enjoy as a convenience is actually the provider of necessity, and we might treat it that way if we would wake up and smell the coffee. But we can’t because the alarm clock didn’t go off and the coffee maker didn’t turn on due to a power outage. The tangle of wires and junction boxes that I draw today might save a life tomorrow, if properly funded and maintained. Now that the lights are back on, I hope someone will come home and that we can find a way to support some serious infrastructure investment.

Artist Bill Batson, an activist and former NYC resident, creates up to five sketches and essays each week curbside in Nyack, NY. “Nyack Sketch Log: The lights are back on. But is anyone home?” Copyright 2011, Bill Batson