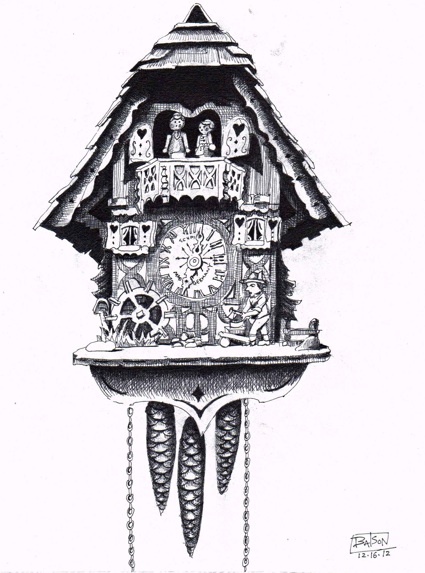 Every ornament, toy and clock at Hickory Dickory Dock tells a story. Once you pass under the canopied entrance of 43 South Broadway in Nyack, and navigate the gauntlet of wind chimes, you enter a forest of handcrafted collectibles. Some of the objects invoke fairy tales, others honor folklore and some have a direct link to the customs that shaped how Christians in America celebrate Christmas.

Twenty seven years ago, attorney and civic leader John Costa learned that a Nyack couple was no longer able to manage their small clock shop. Costa had always been interested in clock making and his parents had owned a small retail shop in Bergen County when he was a child.

Because of the demands of his law practice, Costa had to convince his wife, a painter and graphic artist, to support the venture.  Norma Costa’s natural affinity for aesthetics and craftsmanship has developed into an aptitude for the mechanics of clock making and repair. Their daughter Loreen, who manages the day-to-day operation, has traveled to Germany annually for the last 25 years to build relationships with the craftspeople that make Hickory Dickory Dock’s clocks and collectibles.

The business is in its third location. They started out in half of the space that is now the Runcible Spoon.  Their next venue was at the corner of Franklin Ave. and Main St. that has since become the Murasaki restaurant. In 1999, they moved into their current location, a building that was once White’s Funeral Home.

“This is a perfect location for us,” said Loreen. “A rectangular store creates a conveyor belt where people move quickly up one side and down the other, but the nooks and crannies of this old building allow people to linger and settle in.”

The floors, shelves, walls and display cases of Hickory Dickory Dock hold hundreds of toys, seasonal decorations, nutcrackers, beer steins and jewelry, but clocks dominate the space.  There are clocks for the wall, floor, desk and mantle. The constant movement of dials and pendulums and the music of clocks marking time are the soundtrack of the store. “We try to avoid the cacophony of having them set to chime at the same time, but we make sure that when you’re in the store, at least one of our clocks is always speaking to you,” Loreen said.

Hickory Dickory Dock represents some of the finest clock makers in the world including Chelsea of Boston, Comitti of London, Hermle of Germany and Howard Miller of Zeeland, Michigan.

The centerpiece of the clock collection are the cuckoos. A back wall of the main room of the shop is covered, salon style with dozens of cuckoo clocks.  With their hand carved moving figurines and distinctive sound, the elaborate timepieces are the pride of the black forest in Germany.  The craftspeople of this region are credited with inventing clock making.

During a family trip in 1991 to visit the family-run factories that produce the clocks that they sell,  the Costas decided to expand their business to include holiday decorations.  “Many of our Christmas traditions, from the Christmas tree to the practice of counting down the days that are a part of Advent are from Germany,” said Costa. “Our Santa Claus looks and behaves like their Saint Nicholas, who in German legend fills shoes that children leave out with sweets.  A major difference in our Christmas custom is the character of  Krampus. Where our Santa withholds gifts from those on the naughty list, in German folklore krampus visits bad children to deliver a lump of coal and a few whacks with a thin switch,” she said.

Hickory Dickory Dock now has decorations for a variety of seasonal holidays, and works with crafts people from around the world.  What all of the items have in common is that they share the stories of the families and regions of the craftspeople who create them.

And while the Costas have spent years developing relationships with artists and crafts people, Loreen knows that the real story begins when someone comes into her shop. “When one of our customers selects an item to be a part of their family holiday tradition or to a honor a special event like a birth, that object becomes part of their family’s story,” Costa proudly acknowledged.

Hickory Dickory Dock will be open seven days a a week until Christmas.

The cuckoo clock in my sketch was made in Germany by Anton Schneider.

Nyack Sketch Log is now a book. While they last, first editions can be purchased at the Nyack Indoor Famer’s Market on Thursdays at Nyack Center. On Sun., Dec 14. I will be signing books at two events. I’ll be at Nyack’s 1st Indoor Street Fair at Nyack Center from 10a-1:30p. & at a Nyack Sketch Log exhibit at the Nyack Library from 2-4p. You can also order books at billbatsonarts.com. Thank you for your continued support of my work.