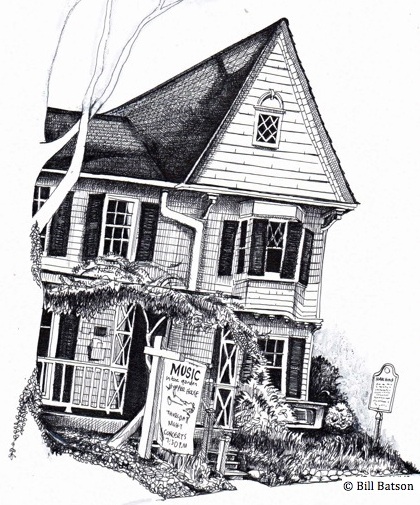 This house was saved from destruction in the early 1970s by an ad-hoc coalition that included neighbors, Rotarians, labor unions, students and artists. Not many causes can assemble such a vast cross section of humanity, fewer can inspire the kind of contributions that were necessary to restore a structure that was literally a few signatures away from condemnation. The family that once lived in this home at the intersection of North Broadway and Second Avenue provided the motivation. This is the childhood home of one of America’s greatest visual artists, Edward Hopper.

Hopper’s iconic and evocative paintings linger on man-made landscapes, both urban and semi-rural. In Hopper’s world, the landscape shares equal billing with the human figure.  Often the setting is the leading lady. The preservation of Hopper’s house allows us to view the artist in relation to his aboriginal setting. Thanks to a local tradition of historic preservation and the absence of over-development, the majority of the village that you see today is very close in scale and population density to how Nyack was in the early 20th century, when Hopper was a child. 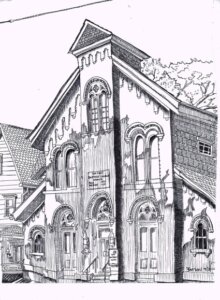 A short walk from this house to the north will bring you to the First Baptist Church, a sanctuary that was founded in 1851 by Hopper’s great-grandfather. The enterprise that generated the income that allowed Hopper to pursue a career in the arts, GH Hopper’s Dry Goods Store operated by his father from a storefront that is now the Grace Thrift Shop several blocks to the South of the family home. 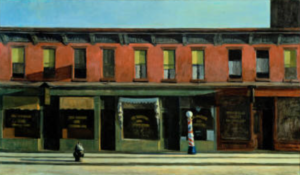 New Sights and Sounds and the Hopper House 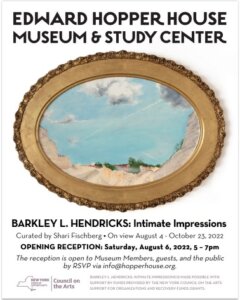 The reception is open to Museum Members, guests, and the public by RSVP via info@hopperhouse.org.

Jazz in the Garden

The widely acclaimed Jazz in the Garden series continues on Thursday through August 24th.

The Museum is open on Thursdays from 1-5pm.

On concert evenings, the garden will open at 6:30pm. Concerts start at 7pm, and go until 9pm (with intermission).

Hopper left home after graduating from Nyack High School, but would return to visit his sister, Marion, who lived in the house until her death in 1965. The artist died on May 15, 1967 and his wife of over 40 years, artist Josephine Verstille Nivison passed away a year later. The demise of this entire cohort of the Hopper family over such a short span put the future of the family home in jeopardy. After Marion’s death, the house became an abandoned eyesore inhabited by squatters.

When Jeffrey and Barbara Arnold intervened to save the house of their late neighbor Marion in 1970, a real estate investor with plans to demolish the home and build apartments had already purchased the property from the Hopper Estate. The Arnolds were able to raise $15,000 from gifts and interest free loans from concerned citizens to buy back Hopper’s house.
But that was just the beginning of what local architect and historian Win Perry calls the greatest and most exciting adventure of his life.

Perry volunteered to coordinate the restoration project.  The steady stream of individuals and organizations that answered the call to save Hopper’s house and appeared at the work site to lend a hand must have resembled an Amish barn raising.

The creative spirit of the famous former occupant seemed to inform some of the solutions to construction problems. Philip Fey, the Dean of Continuing Education at Rockland Community College created a course titled “Caring for an Old House” that gave students and faculty a way to volunteer for the restoration, fulfilling their civic and academic obligations simultaneously.

Artist Michael Delia installed himself in the attic as the first and literal artist-in-residence at the Hopper House in exchange for repairing the shingle roof. John Cant, a carpentry contractor made numerous contributions that included the stone path that leads to the backyard where the Jazz in the Garden concerts are now staged every summer. This series, originally organized by Bert Hughes and Ray Wright, was launched in this frenetic period when the community constructed its own landmark and cultural center.

Thanks to decades of volunteer labor from board members and supporters, the property is now listed on the National Registry of Historic Places and functions as the Edward Hopper House Museum and Study Center.

Today the Hopper House offers a climate controlled gallery space with a packed schedule of world-class exhibitions and events, managed by a professional staff led by Executive Director Kathy Beniwitz.

Edward Hopper celebrated the essence of his hometown on canvas, making our village recognizable to art lovers everywhere.  If these volunteers had not returned the favor, we would not benefit from the cultural pilgrims from around the world who come to Nyack to see what made Hopper happen.

Special thanks to Art Gunther for his essay on the restoration of the Edward Hopper Arts Center that was published last year in a  fortieth anniversary commemorative brochure entitled “The Edward Hopper House, Beginning, Achievement, Future: A tribute to Our Founders.”

For those who want to learn more about the private life of the reclusive artist, I recommend Gail Levin’s “Edward Hopper an Intimate” Biography, Rizzoli, 2007.