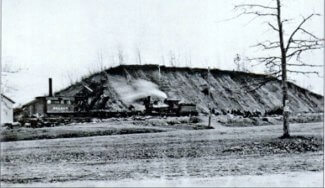 1887 photo of Sugar Loaf Hill in Flashback Friday. View is looking east across the railroad tracks. Trees have been removed from Sugar Loaf. An Erie train crew appears to be working on the tracks. Sugar Loaf is a very apparent feature in the landscape.

In the April 18, 2022, Flashback Friday, the e-publication of the Historical Society of Rockland County, a photograph dated 1887 along with a newspaper reprint from 1872 depicted Sugar Loaf, a small mountain in Sparkill.  A mountain in downtown Sparkill? Named Sugar Loaf? Can this be true? If there was a Sugar Loaf Hill, what happened to it? Thanks to geology detectives Tom Perry and Karl Mattsen, both science teachers at Nyack High School, the mystery is solved. It isn’t only true, it’s an almost unbelievable story.

The mystery of Sugar Loaf is inextricably bound together with the story of the emerging hamlet of Sparkill, the coming of railroads to Rockland County, and Piermont Pier.

Sparkill is a lovely, quaint hamlet. The Route 9W overpass keeps through traffic to a minimum today. Back in the 19thcentury, the hamlet was a much busier place. The hamlet has had various names over time.  Around the time of the Civil War, the hamlet was not much more than a few homes and the intersection of several roads. It was known as Blanche’s Crossing, a part of the newly named village of Piermont. The general area was known as the Tappan Slote (or just plain The Slote, from the Dutch word sloot for trench or ditch), so named for the break in the Palisades through which ran what was also known as Sparkill Cut (kill deriving from Dutch for creek). So, what we call Sparkill Creek is a duplicative name meaning Spar-creek-creek. Shallow draft sloops once came up Sparkill Creek carrying goods and people between the Hudson River and inland to the village of Tappan and surrounding farms.

Then came the railroads. In 1871, a new station was built on the Northern Railroad named Sparkill. The old name of Upper Piermont disappeared replaced by Sparkill. By the turn of the 20th century everything changed once again. Automobiles replaced trains and Sparkill became a sleepy hamlet once again.

Photo of Blanch Crossing looking south showing the intersection of the Erie and Northern Railroad lines. The Erie line cuts across diagonally and the spur to Nyack is in the center.The rail lines are now gone and the intersection sports a stop light. The baggage terminal in the center is now a commercial florist. Courtesy of Arbor Hill Garden.

What put Sparkill and Piermont on the maps was the Erie Railroad. The brainchild of Eleazar Lord, the Erie Railroad created a quicker route from New York City to Lake Erie than the Erie Canal. Piermont was chosen as a start point because there was not then an agreement allowing trains to pass through New Jersey. Work started in Piermont around 1835. The section from Piermont to Goshen was complete by 1841.The entire Erie Railroad, then the longest railroad in America, opened end-to-end on May 14, 1851, with Millard Fillmore riding in the inaugural trip.

Newspapers reported the vast quantity of goods passing through Piermont in both directions including livestock and produce bound for the “vainglory armies in the Crimea.” One person shipped 33 tons of eggs in three rail cars. At one time some 5,000 cars were waiting in Piermont for clearance to New York City. In 1859, over 200 people worked at the train yards, loading and unloading cars, barges, sloops, and schooners all while the rumbling of trains and the shrills of whistles sounded.

By 1859, the Northern Railroad was built connecting Sparkill with Jersey City, the problem of interstate transportation being resolved. A spur opened from Sparkill to Nyack in 1870. The two rail lines crossed in Sparkill.

Photograph of Piermont Pier circa 1900. Note the wide landing at the far end. The grouping of houses is along Paradise Ave. Some are still there.

The Hudson River just off Piermont is too shallow for large boats. To enable steamboat freight to connect to the Erie Railroad, the Piermont Pier was created extending some 4,000 feet into the river with a 120-foot traverse at its end. Building it was a major undertaking requiring an army of workers equipped with picks, shovels, horses, mules, and oxcarts. The steep hills on the shoreline of Piermont were leveled for fill. Wood piles were driven into the river and the pier was reinforced with stone and earth. Much of the natural marsh was filled in as well. A 300-foot wide-area was used for train roundhouses that could accommodate 30 locomotives. A brass factory, sawmill, lumber yard, paint shop, coopersmith, and repair shops completed the rail yard.

With new rail lines through New Jersey, the need for the pier diminished to the point that only a single train per day of iron was transacted at the pier. In 1874 a fired destroyed the entire Erie shops never to be rebuilt again. In the 1890s, as we shall soon see, the pier was refurbished for the transport of coal. The railroad yards were taken over by the Piermont Paper Company in 1902 and continued in business in various forms for another 80 years.

Once the pier was complete in 1838, the village name was changed from The Landing to Piermont.

Sugar Loaf Hill in Sparkill was so named because it resembled a mound of sugar, sugar in the old days being a valuable commodity. There are over 450 mountains and hills globally named Sugar Loaf. New Zealand has one and the U.S. over 200. Probably the most famous Sugar Loaf is in the Rio de Janeiro harbor. Locally, two dramatic small mountains in Chester and Garrison are named Sugar Loaf.

Sugar Loaf Hill appears in the written record in 1869 when notices in the Rockland County Journal announced all day and evening picnics with music were held in the grove atop Sugar Loaf. It was described “as one of the best for entertainment of this kind to be found in this part of the County, being of easy access and yet well shaded with large trees.” The location? Just east of the train station. 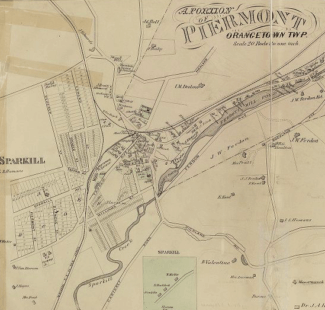 1876 map of Sparkill shows a a few buildings near the Sparkill train station and proposed housing lots. An empty space in the center is presumably the location of Sugar Loaf Hill.

The Erie Railroad couldn’t leave well enough alone. Sugar Loaf Hill was to be removed for fill. Railroad companies got their way in those days. In 1872, all the trees were removed from the top of Sugar Hill. A new, groomed park still visible today was created between Sugar Loaf and the train tracks. The first business opened in Depot Square. A new hotel with 150 rooms was planned for the site.

Sugar Loaf remained a bald topped hill until 1889 when the Erie Railroad began serious work to move its sand and gravel. The fill was used to rehabilitate the Piermont Pier and surrounding meadows for use as a depot for coal transported by the railroad. It took about a year to remove Sugar Hill.

How Big Was Sugar Loaf & Where Exactly Was It Located?

A map from the most southerly of the historical wayside trail markers along the rail bed from Sparkill to Nyack shows the location of Sugar Loaf on the left.

Judging from a single photograph, Sugar Loaf was as least 50 feet high and probably higher. The flat top was over 150 long with sloping sides all round. We can only guess at its depth. From the written record and from maps that show an uninhabited space on old maps, there is a high probability that Sugar Loaf was located bordering on what is now Main Street across from Depot Square and the old train station on the west, William St. on the south and east, and Union Street on the north.

An onsite visit by our geology detectives appears to confirm this placement. The area where the 1914 bank building still stands is slightly dome shaped.  As one walks west to east across the parking lot of the “bank” it gently rises and falls.  On the far east side of the parking lot along Paulding Place there are several boulders of varying compositions that appear to be glacial erratics.  The observational evidence seems to indicate a hill was once here.

After the removal of Sugar Loaf, business soon sprung up including the once planned hotel, although not a 150-room giant. The hotel, among its many names, was once the Sugar Loaf Hotel and Café. The building still exists, recently the first home of the popular Roost restaurant and now Autumn restaurant. The old 1914 bank stands at one end.

The scale of Sugar Loaf can be appreciated by observing a similar hill nearby across from where the former railroad tracks (now the Joseph Clarke Rail Trail) crosses Main St., just behind Eastside Automotive. This hill is much larger than Sugar Loaf. Sparkill Ave. crosses over the short side of the hill that ends just before the Palisades Parkway. The unnamed hill is now populated by mostly mid-century homes.  Many years ago, the Graney sand and gravel yard operated just behind the location of Eastside Automotive.

How Did Sugar Loaf Hill Form? 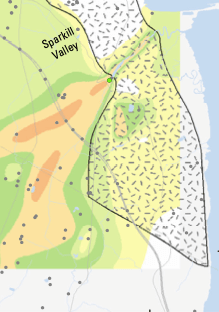 A USGS map of alluvial deposits along the Sparkill valley. The brown color indicates deposits over 100 feet high in the area where Sugar Hill was located.

The geology of Sparkill creek is a fascinating tale in and of itself dating back to the ice ages. The Hudson River once emptied into the area of Sparkill Creek and flowed into New Jersey. The current river mouth was blocked by an extension of the terminal moraine now known as Long Island. For thousands of years, the melting glaciers gushed water into New Jersey until the moraine at the mouth of the Hudson was breached. Water then flowed through the deep riverbed of the Hudson River as it does today. The ancient opening at the Piermont Slote became the small creek named Sparkill.

As the glacier retreated it left piles of sand and rock not only forming Long Island but outcroppings in New Jersey. Sugar Loaf is (or was) one such glacial deposit. Such deposits, known as kame terraces are composed of assorted sediments deposited adjacent to glacial ice.

Checking the geological maps, a kame terrace is clearly shown exactly where we see it today behind Eastside Automotive. Why wouldn’t there have been another such flat-toped terrace nearby with the same origination? 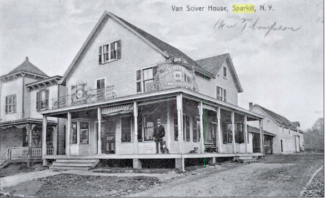 The Van Scriver House was once the Sugar Loaf Hotel and Cafe located where Sugar Loaf was stood.

Thanks to our geology detectives, the size, location, and formation of Sugar Loaf Hill in Sparkill is solved. The sand and gravel from Sugar Loaf used to stabilize Piermont Pier have probably long been washed down the Hudson River Valley riverbed. But thanks to our geology detectives’ work, we can more easily visualize a picnic paradise high above Sparkill Creek on top of the shady flat top of Sugar Loaf. Make a trip to Depot Square in Sparkill, look east, and you too may experience the ghost of Sugar Loaf Hill.