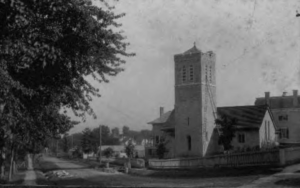 One of the saddest events of Nyack history is the day the melodic bells of the Bell Memorial Tower in South Nyack went silent when it was demolished to make way for the New York State Thruway. The Bell Memorial Chapel was built and named as a memorial for Mr. Isaac Bell by his wife, a wealthy New Yorker. She established a rest home for working women known as Heart’s Ease Cottage on the 1.5-acre property located at the corner of Clinton and Hillside Avenues in South Nyack.

Few villagers ever went into the private chapel, but everyone enjoyed the hourly chimes. The bells, a clock, a pipe organ, and gothic stained-glass windows were moved elsewhere in the closing days of 1953 and the early days of 1954. Now the sound of the memorial’s melodic bells is replaced by car horns on the Thruway, the peaceful colored window light by high intensity car lamps, the tower by the wall of a sound barrier, and the clock by automated toll towers. 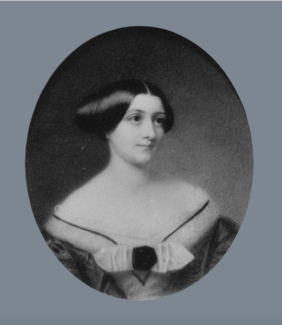 Watercolor of Adelaide Mott Bell in the Metropolitan Museum of Art Collection.

Adelaide Mott Bell died in Paris in 1901, two years after completion of the tower. She was the daughter of Dr. Valentine Mott known as the “father of surgery” in New York City. The family lived in a large Italianate brownstone mansion at #1 Grammercy Park. Dr. Mott was one of the founders of NYU School of Medicine and President of the New York Academy of Medicine. Adelaide Mott met Isaac Bell on a packet ship sailing from Europe with her father when she was 16. They were married for over 50 years. 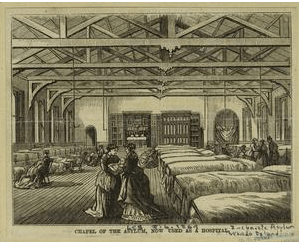 Illustration of the Inebriate Asylum on Ward’s Island.

Isaac Bell was a prominent citizen of New York City who was rumored to have once declined a nomination for mayor. He served in several civic positions as a member of the Board of Education and as President of the Commissioners of Charities and Corrections.  One of their projects was building an Inebriate Asylum on Ward’s Island in 1867. Such asylums were then in vogue for the treatment of alcoholism. Judges could sentence people to the asylum for a “cure”. During the Civil War, the Bells formed the Union Defense League of New York and assisted in the war effort. Mrs. Bell went to the front to care for the wounded.

The family lived on upper Fifth Avenue and had 4 children, one of whom, Isaac Jr., was a successful cotton investor who served as minister to the Netherlands. He was the brother-in-law of the publisher of the New York Herald. He built an arts and craft style house designed by McKim, Mead, and White in Newport that is now a National Historic Landmark

The Church Bells of Nyack 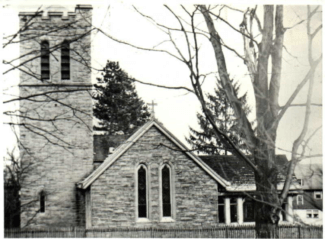 Church bells were once numerous in Nyack so the idea of a tower with bells was not unusual.  In the early years, the Dutch Reformed Church, and the Presbyterian Church (now the Nyack Center) rang bells antiphonally. Later, bells were hung in the belfry of St. Paul’s Methodist on S. Broadway and St. Anne’s on Jefferson St. Grace Church had memorial chimes. Wayside Chapel on River Road had a single bell. Bell Memorial chapel had melodic Westminster chimes.

Location of Bell Memorial Tower on the 1910 Sanborn Insurance map.

As the 19th century was closing, the Bell Memorial Chapel with its iconic tower was completed, the same week that property was purchased for a new Nyack Library.  Mrs. Adelaide Mott Bell thought that a charitable home for women would be a fit tribute to her philanthropist husband. Bell acquired the shaded property in 1898. The property may have come to her attention via the recent arrival of Dr. Simpson’s Christian Alliance Institute just up the hill. Known as the Weston property, the land contained a three-story house with a mansard roof occupied by the Rev. Hagemon family. 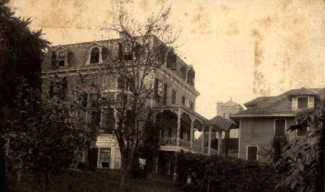 Heart’s Ease Cottage with the Pavilion on the right and the tower in the background.

The house was entirely renovated by Bell. A broad staircase was added. The front porch opened into a large hall with a fireplace with a library on one. end Long French windows fronted this room and watercolors and etchings hung on the walls. Behind this room was the rector’s quarters and a room used as a chapel until the memorial chapel was built. The top two floors had four bedrooms, the rooms on the front looked out to South Mountain, the windows on the other side looked out to the Hudson River. The dining room and the kitchen were in the basement. Because of the dip in the land, the rear of the basement was open. The house came to be known as Heart’s Ease Cottage.

Women were accepted by the rector for a nominal cost. Women could stay for a fortnight or longer if there was no other demand. It was open year-round.  Dr. Toms of Nyack served the medical needs of the guests.

Above the fireplace in the main hall was a portrait of Isaac Bell and a bronze plaque with the inscription “To be a place of refreshing for the weary and of strength to the weak, this home is given in memory of Isaac Bell, a lover of his kind, by Adelaide M. Bell.” 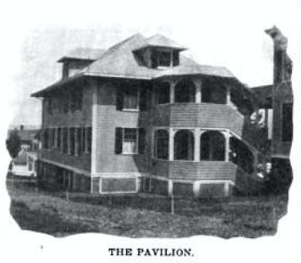 A new building called the Pavilion used for summer work was added to the northeast of the cottage.  It was connected to the first and second floors of the cottage by a covered walkway. It had bathrooms and a laundry in the basement. A 30’ square dining room, lavatory, and sitting room were on the first floor. On the second was six dormitory rooms with three beds each. At the top was a ventilation space. A large front porch provided views on one side. A children’s playground with swings and side lawns with flowers provided entertainment and open space.

The Episcopalian parish of St. Ignatius used the Pavilion in the summer sending groups of 18 for two weeks. 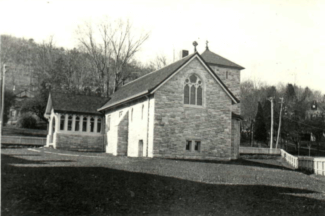 View of the chapel looking to the south. Courtesy of the Nyack Library.

The chapel was designed by New York architect Charles Haight who also designed Grace Episcopal Church in Nyack. Haight designed many buildings for Columbia and Yale Universities and numerous churches The local carpenter was Charles McElroy and the local mason was John Magee, an Irish immigrant who lived in Nyack and worked on a number of churches in the area and residences in Tuxedo Park. He learned his trade building the Carnegie Steel Company in Pennsylvania, worked in California, and built bridges on the isthmus of Panama. 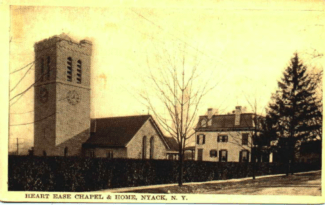 The chapel itself was located on the north side of the property. It was 20 x 40 feet with massive stone walls built of Indiana stone with gothic-style doors and cathedral windows. The tower was 30’ high.  The inside of the roof had exposed pine timbers. The timbers, woodwork, and floors were stained a walnut color. The walls were painted blue.  In the chapel was a large organ that was donated and was perhaps built locally at the Tallman piano and organ factory. On the south side was a 16 x 10’ “porch” (a small building itself) with Gothic windows. Inside, a chancel painted blue was raised two feet from the main floor, and an altar was raised in the rear one foot above the chancel.

Following Mrs. Bell’s death in 1901, a stained-glass window imported from Germany was placed over the altar in her memory and the bells and the clock were installed. Only two clocks of its kind were ever manufactured. The mechanism was complicated and ran by kerosene.

On November 11, 1899, the chapel was consecrated by the Bishop of Delaware acting for the Bishop of New York. A party of some 40 people took a special train car to Nyack for the opening at 11:30. A small choir from St. Ignatius sang and Victor Baier of the old Trinity Church presided on the organ. Pink roses and candles graced the altar. After the service, luncheon was served in the Cottage and the rooms were thrown open for inspection by the guests who returned to the city in the late afternoon. 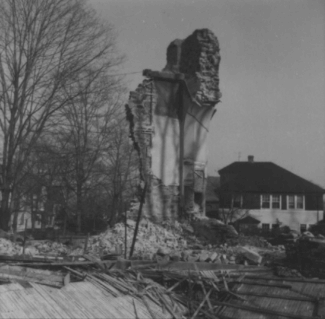 The tower was well built and took several days to demolish. Here is a final view of the tower. Courtesy of the Nyack Library.

It wasn’t a simple matter to demolish the stone structure. Photographs of its destruction show a slow destruction of the thick walls. The four bells and clock were removed by carillon expert George Bachofen of Tenafly. The hand-pumped pipe organ was removed to the Clark organ factory in Nyack for renovation and addition of a motor. James Jackson removed the stained-glass windows and sold them to local churches.

The clock was moved to Grace Episcopal Church. The owners of the cottage did not want to move them, and the Thruway contractor was unsuccessful in finding a buyer. Unlikely as it seems from the photographs, the cottage may have survived, and it still exists somewhere in South Nyack along with many other houses moved during Thruway construction.