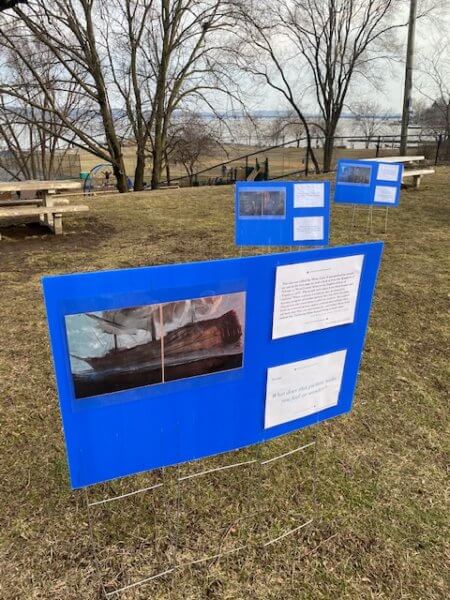 Nyack’s first-ever story walk, in Memorial Park through March 31, features the children’s book, The 1619 Project: Born on the Water.

Walking and reading are two healthful activities rarely associated with each other. In fact, simultaneously doing both should probably be discouraged lest you obliviously wander into a busy intersection while fully immersed in a paperback version of The Heart is a Lonely Hunter.

Audio books have mostly cleared up this dilemma. But if you are looking for the printed word and you (and maybe your kids) are in need of some exercise, Nyack is offering its first-ever “story walk” in Memorial Park through March 31.

The idea, brought to fruition, fittingly, by the IDEA (Inclusion, Diversity, Equity and Action) committee at Upper Nyack Elementary, puts each page of The 1619 Project: Born on the Water, on display, in sequence, on the upper-level of Memorial Park. Each page is also accompanied by a prompt meant to spark thought and conversation about the book’s story, which “chronicles the consequences of slavery and Black resistance in the United States,” according to a flyer advertising the walk.

Of course, this is not an easy conversation. It involves slavery and race, two issues many people struggle to talk about.

It’s also been turned into a political wedge issue. The 1619 Project and Born on the Water, the children’s book adaptation of the book, are being held up by Republicans politicians as evidence of racism of the infusion of critical race theory into schools.

First of all, nobody should be scared or worried about critical race theory being taught anywhere. Nobody is being indoctrinated. White people are not being taught to hate themselves, as Ted Cruz likes to put it. The theory, as Born on the Water co-author Nikole Hannah-Jones points out, is simply a way of explaining why there remains massive inequality along racial lines despite the civil rights legislation enacted in the 1960s.

Secondly, Hannah-Jones says, the 1619 Project is not critical race theory, which is mostly taught in law school, but it was definitely “informed” by it.

As we mentioned in Monday’s Villages piece, book banning appears to be all the rage among conservatives, even locally. Instead, let’s embrace books, let’s embrace difficult conversations. Let’s take a walk in the park — to read.

Here’s a reading of Born on the Water: