The Story of DePew’s Glen & the Bridging  of Broadway 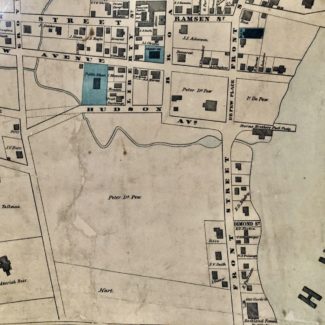 Broadway was not always a through street. South Broadway was interrupted by a deep gulley known as DePew’s Glen, that was carved out by the Nyack Brook just south of Hudson Ave. The only way to travel south to Piermont from Nyack was to take a farm lane later Piermont Ave. to River Road. In the 1870s, soon after the railroad first came to Nyack, a rickety bridge crossed Broadway. By 1885, DePew’s Glen was covered by a new bridge and three-story brick buildings.  Broadway became not only passable but a major village thoroughfare.

We are fortunate to have a photographic record of DePew’s Glen by Isaac Van Wagner, Nyack’s first commercial photographer who later had a studio at DePew’s Glen. He made at least seven stereoscope slides of DePew’s Glen from different perspectives according to a list on the back of one such slide. At least four of these slides still exist either online, in the archives of the Nyack Library, or a part of the Win Perry Jr. collection. Together they tell a remarkable story of early Broadway.

Bridges have sparked controversy in Nyack from our earliest days. Nyack is bisected by several small brooks that become raging rivers in times of heavy rain making crossing difficult for horse and buggies. Nyack Brook, also once known as the Mill Brook for its use by two colonial mills, winds though the village. When Nyack was a small farming village in the early 1800s, the brook was crossed in just a few places. In Upper Nyack at the foot of Old Mountain Road, the Upper Nyack Brook carves out a deep gulley known as Crumbie’s Glen. In South Nyack, a stream, now mostly dry, ran along Brookside Ave. and carved out a gulley that is still visible at Broadway.

As Nyack expanded as a commercial center, bridge building over Nyack Brook became a necessity.

Tunis DePew and Robert Hart owned much of the waterfront in Nyack and S. Nyack in the early 19th century. Nyack Brook cut through DePew’s land and a brook, now mostly dry, cut through Hart’s farm, alongside what is now Brookside Ave. Both built bridges across the brooks at narrow points to create a farm lane through their property. The bridges may not have been substantial. Both Depew’s and Hart’s bridge were destroyed by a major flood in the 1840s.

Depew’s bridge was replaced by a large brick bridge known as the Arch Bridge in the 1870s. The bridge was been maintained ever since. This large and impressive bridge can be viewed from Memorial Park. From its opening, the sounds of rushing water echo loudly during rainstorms. 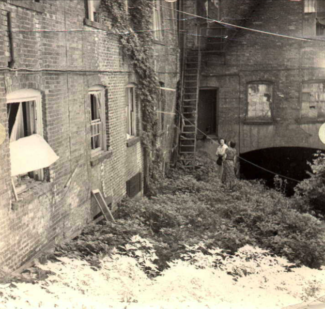 1954 view of the Nyack Brook entrance under the buildings on the west side of South Broadway.

Nyack Brook, also once known as Mill Brook, originates in what was once a swampy marsh along Rt. 59 where the Turnpike now crosses. Here, in the 1870s, a dam was built to create a pond from which ice could be harvested. The Ice Pond, also known as the Skating Pond, was filled in by the time the Thruway was built. Nyack Brook flows downhill alongside Main St. Where Main St. intersects with Mill Street, the brook was damned for a sawmill. From the mill the brook flows east to Bridge St. (bridged in the 1870s) where it makes a 90-degree turn south. The brook turns east again near Hudson Ave and flows downhill to the Hudson River.

Mostly underground today, the brook is visible alongside Main St. near Mill St. and along the east side of the Community Gardens. A covered part of the brook was opened up as parkland during the development of the Pavion apartment complex. One last view may be seen out a rear window of Strawberry Place as it dives under S. Broadway. The brook emerges under the Arch Bridge and runs along the southern border of Memorial Park. 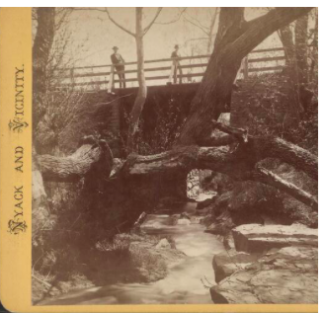 Two men are shown in this Van Wagner stereoscope (only 1/2 is shown here) of the old Broadway Bridge.

A bridge once known as the lower Broadway bridge crossed a ravine that is still visible today near Brookside Ave.  The bridge was improved in the 1870s. The Rockland County Journal remarked that too many people were seen loitering on the bridge in 1875.

Bridging DePew’s Glen was a different matter. The ravine was deep and wide. The first bridge was in place by 1874. A newspaper article relates the story that two gentlemen boarders at the Smithsonian Hotel on lower Main Street were thrown from their buggy while crossing the bridge and injured.

A sidewalk was laid in 1877 along the side of the bridge but still the open quarry or “glen” had a “stench that was almost unbearable” according to the Rockland County Journal. Garbage and offal who were thrown in the brook along its entire length and tended to pool here during drier times.  No wonder the brook was covered over.

Van Wagner stereoscope of the old Broadway bridge from the 1870s.

DePew’s Glen, named after Nyack’s largest landowner in the 19th century, was a natural gulley much expanded by quarrying, one of Nyack’s principal industries of the 1830s. The glen was once the site of a mill pond when the land was owned by the Tallman family in the 18th century. By the Civil War, Tunis DePew, grandson of the original Nyack landowner, built greenhouses for growing roses for export to NYC on the south-east side of the glen. The DePew family home was on the north side of the brook and further down the hill was a factory that housed Storm’s Cedar Pail Factory and later, a mill manufacturing shoddy wool. Not much else was built near DePew’s Glen until the later 19th century.

Van Wagner stereoscope view of the pond in DePew’s glen. Courtesy fo the Nyack Library. Note the building on the left.

The glen must have been idyllic at some time. It is reported that a buttonwood tree grew on the east side underneath which was a “lovers’ rock.” Van Wagner’s stereographs that have been located show the good, the bad, and the ugly of the glen with peaceful, tangled brush, and rickety bridge photographs

Newspaper articles attribute the idea of covering over DePew’s Glen with commercial buildings to Isaac Van Wagner. The idea was to improve the existing Broadway bridge by grading it to street level and filling in much of the the glen so three-story brick buildings with commercial space on the ground floor and apartments above could be erected. Work began in 1880 and Isaac Van Wagner bought the property for the first building at the southwest corner of Broadway and Hudson Ave. that became his art gallery and studio. 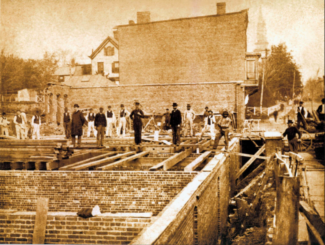 The covering of DePew’s Glen is shown in this photo. Van wanger’s studio is already built on the corner of S. Broadway and Hudson Ave. Note how deep the foundations are. The bridge is now more substantial and at a level grade. The spire of the Nyack Center is in the background. The original of this photo hangs in Strawbery Place whose foundation is at the front of this photo.

A row of brick buildings from 62 to 78 S. Broadway completed one of the premier business areas of its time known as DePew Place. Later, similar brick structures were built on the east side of Broadway. Tunis DePew moved his greenhouses from there to what is now the upper part of Memorial Park in order to make room for the buildings on the east side.

The president of the Northern Railroad bought one of the buildings next to Van Wagner’s when the row was completed by Tunis DePew. Tunis had a real estate office in the row. The center building was occupied by Fraser’s, a popular confectionary and ice cream salon. The office of the Rockland County Journal was in the building furthest south. An iconic grocery, Traverson’s, opened in 1909 at #76 and remained in DePew Place for many years.

Van Wagner was heavily involved in the construction and development of Depew Place. He was the owner of the first building on the east side, #73, starting in 1883 after the completion of the west side buildings. When they were started the famous buttonwood tree and the lovers’ stone were removed. 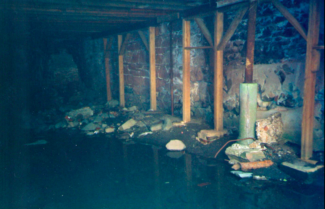 A relatively recent photo of what is left of DePew’s glen, now a drainage tunnel under South Broadway.

Once the commercial buildings were completed, DePew’s Glen vanished deep beneath S. Broadway and the basements of the buildings. Even so the glen was remembered for a time. in 1886, an ad for the photographers Lewis & Hoffer who took over Van Wagner’s photography business listed their address as DePew’s Glen, corner Broadway and Hudson Ave. The Nyack Brook tunnel under S. Broadway was all that remained of the glen. The tunnel starting at Strawberry Place and ending at Arch Bridge has been rumored to have been navigated by daredevil boys from time to time.

Many cities and towns have uncovered some or all of their hidden streams as in Seoul, Korea, Yonkers, and Tarrytown. In Seoul, the uncovered river has become a pedestrian walkway and a tourist attraction. Imagine for a moment what Nyack would look like with a small S-shaped stream meandering through downtown surrounded by cafes, parks, and shops with a natural pool at DePew’s Glens. It would be Nyack without some of its brick buildings but a more natural and scenic Nyack. 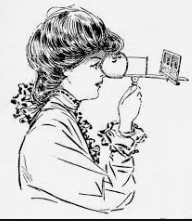 What is a Stereoscope and Where Can I See One? 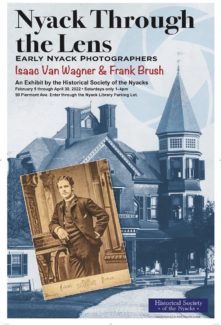 Stereoscopes were quite the rage in the 19th and the early 20th century. An inexpensive, unpatented stereoscope was invented by Oliver Wendell Holmes in 1861 soon after photography became popular. By the late 19th century, most middle-class homes could afford their own viewer and sets of slides.

The slides were taken with a special camera with lenses 2.5 inches apart. The side-by-side photos, when placed in the stereoscope and focused, create a three-dimensional scene.  People could experience for the first time, exotic, faraway places like the Sphinx or the Andes in this way. Not only did stereoscopes bring the world to Nyack, Van Wagner’s local scenes brought Nyack to the world.

Nyack Through the Lens, the current exhibit at the Historical Society of the Nyacks museum has an antique stereoscope viewer that guests may use to look at ten of Van Wagner’s Old Nyack stereoscope slides. The exhibit runs through the end of April. The Museum is open Saturdays from 1-4p or by appointment.

Michael Hays is a 35-year resident of the Nyacks. Hays grew up the son of a professor and nurse in Champaign, Illinois. He has recently retired from a long career in educational publishing with Prentice-Hall and McGraw-Hill. Hays is an avid cyclist, amateur historian and photographer, gardener, and dog walker. He has enjoyed many wonderful years with his beautiful companion, Bernie Richey. You can follow him on Instagram as UpperNyackMike.