The opening montage of How They Got Over invites you into the heart of the song. The film sets the stage for a mix of archival performance, contemporary interview, and reenactments that bring the viewer into the world of black gospel quartets from the 1930s-50s. Rivertown Film Society is now is streaming this documentary. 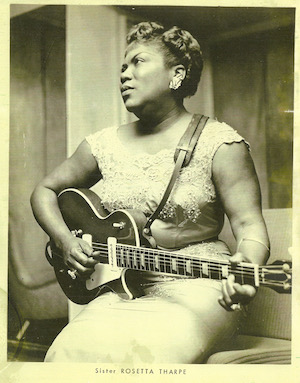 “We were whipped into doing some sad singing, mournful sound. It was like a crucifixion for us,” shares Ira Tucker of the Dixie Hummingbirds as he reflects on the era of music making. “But we had it in our hearts.” His story blends into a performance from The Consolers. Director Robert Clem continues this move throughout the documentary, guiding the viewer to connected the lived experiences of the musicians to the songs they produced. The film comes from One State films, which has a legacy of storytelling engaged with investigating the history of Alabama and the South.

How They Got Over traces the emergence of black gospel into popular music and the capitalization on the sound by record companies, which led to a musical revolution and the foundations of what we call rock and roll. Starting in the 1920s, the film highlights Black singers who began traveling with their music all the way to the rise of the Apollo theater to the formation of doo-wop and famed singers like Sam Cooke, Lou Rawls, and Wilson Pickett.

“As a lifetime fan of gospel music, I believe this excellent film tells the story and shows the artists in a most compelling way,” says Jon Landau of the film. critic, producer, and manager for Bruce Springsteen.

Juliana Roth earned her Master of Fine Arts in Creative Writing from Rutgers University – Camden, where she organized the Writers House Film Series and taught creative writing, environmental writing, and composition courses. Juliana has worked for the Edward Hopper House Museum & Study Center, the Ecology Center, the Center for the Education of Women, and the World Animal Awareness Society, as well as being a frequent contributor to Nyack News and Views.