Nyack Skating Pond in the 1930s. The cars are lined up along Main Street. On the far side of the pond are houses on High Street. The Thruway entrance is now just to the left of the houses.

Before climate change spoiled the formation of deep ice on local ponds and rivers, children would gather on weeknights and weekends to skate and race at the Nyack Skating Pond, once located near where the New York State Thruway crosses Route 59 in Nyack. The West Gate Inn and restaurant, the Thruway west of it, and the Nyack Soft Cloth Car Wash now cover the old pond. The pond froze as early as November 24 in 1888 with skating the next week. Today, thousands of drivers pass by the site each day, either above it on the Thruway or around it on busy village streets without a thought for the excited laughter of yesterday’s children who skated. For many years, children shared the pond with ice companies that farmed the pond and stored ice nearby.

The origin of the pond

Lydecker’s Pond around 1890. The wagons are parked along Main Street. Nyack Ice Company’s ice house is on the far right of the photo.

A number of springs in the flat area bounded by upper Main Street (Rt. 59), Highland Avenue (Rte. 9W), and High Street join together to form Nyack Brook, which flows downhill along Main Street, twisting through downtown Nyack to debouch into the Hudson River at Memorial Park. In 1869, Smith Lydecker deepened and cleared the area between Nyack Turnpike and Oak Hill Cemetery to create a large pond for ice farming. In 1876, he cleared four acres of marshy area of rocks and debris just west of the earlier pond to build a second pond. In both cases, dams and rock retaining walls kept water in the ponds. In reality, Nyack Skating Pond was really two ponds.

Since the dams were often breached during severe storms, the pond’s outlet into the brook was outfitted with gates in 1891 to prevent flooding of the brook downstream. A local volunteer tended the gates until 1930. The gates may have been successful in preventing some floods, but Nyack Brook is known for creating horrendous floods downstream in downtown Nyack every 10-15 years after the ponds were created. 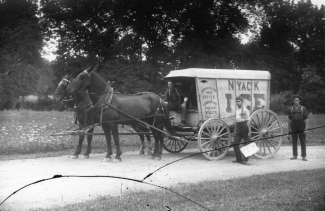 At the time, ice was the only source of refrigeration. By 1879, Lydecker was harvesting 350 tons of ice from the pond, a small amount compared to the much larger operation of the Knickerbocker Ice Company at Rockland Lake. A side benefit was that children could use the frozen pond for ice skating. 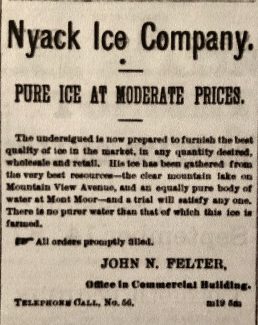 Lydecker built a large ice storage house along the southeast side of the pond in which ice could be stored for year-round distribution. In 1887, John N. Felter formed the Nyack Ice Company that promised pure ice at moderate prices sourced from the “clear mountain lake” on Mountain View Avenue and a pond at Mount Moor (then a name for West Nyack). Felter would go on to farm the ice at Lydecker’s Pond (and later named as the eponymous Felter’s Pond). Felter distributed ice in horse-drawn wagons to Nyack homes throughout the year.

By 1921, farmed ice was replaced by ice made by refrigeration. The Nyack Ice Company moved to the corner of Clinton Ave. and Franklin St. near the train tracks where ice was made using water from springs that fed a brook that empties in the Hudson River. Coal was also distributed from the site, and the company became known as the Nyack Ice and Coal Company. 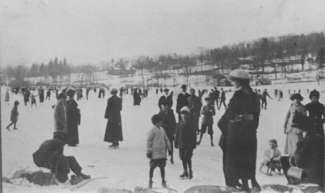 Busy day at the Nyack Skating Pond. View is looking west toward Mountainview Ave. Courtesy of the Nyack Library.

At some point around 1915, the Village of Nyack took ownership of the pond and managed it for skating. Flood lights were installed to allow night skating.

Nyack placed ads in the Journal News in the 1930s, advertising what was then known as Nyack Skating Pond (or sometimes as Nyack Ice Pond). Over the years, children would start skating sometime as early as mid-December but almost always by mid-January. The village provided skate grinding services on site. Much to the chagrin of the Nyack PTA, the village only allowed one free skating day per week, all other days a fee was charged. 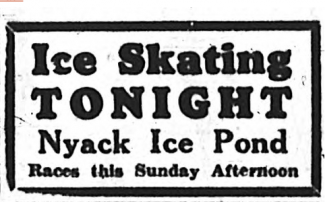 In the 1930s, skating races hosted by the Nyack Skating Club were held on the pond. Local races were held most weekends. A one-mile match was held on Christmas Day 1932 between Rockland County champion Carl Schultz of Spring Valley, a near miss at the 1931 Olympic trials, and Martin Nicholas of Englewood NJ. Two years later, a two-mile race was held with regional skating stars. The race was 16 laps. The winner of the first lap was scored a point and each succeeding lap scored an additional point, with the final lap scoring 16. The skater with the most points was the winner. Women’s races were also held on the pond.

Tragedy at the skating pond

Numerous skating accidents occurred over the years but none was worse than the one in early March 1897. Despite a large sign prohibiting skating, more than a dozen boys and girls were on the ice on a Saturday afternoon. Twelve-year old Mamie Lynch fell through the ice. As she struggled in the icy waters, 17-year old Arthur Lawrence hastened to the rescue. He secured a plank and shoved it out to the edge of the broken ice. Before Mamie could grab the plank, the ice underneath Arthur gave way and he fell in. 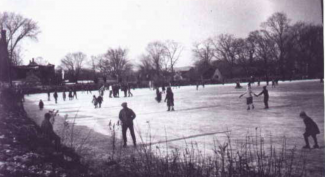 Skaters at the pond in the 1930s. Note the skater leaning on a stone wall. Courtesy of the Nyack Library.

A number of men came to the rescue, throwing a rope to Mamie, who caught it and was helped out. Arthur, however, threw up his hands during the rescue and sank below the water where he drowned. Needless to say, no more skating was allowed that winter.

The demise of the pond

Neglect led to stagnation of the pond, and in 1946 the village sold the pond, a sale that they promised never to do. The pond was drained and became a mosquito-plagued swamp. By 1955, the Thruway was built and any evidence of the pond disappeared. The West Gate Inn was built over what was the eastern middle of the pond in 1961. As the number of people who once skated at the Nyack Skating Pond become fewer and fewer, it is up to the rest of us to remember the shouts of excitement by children on a winter day. 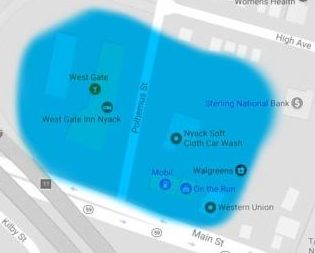 Where Was The Skating Pond? 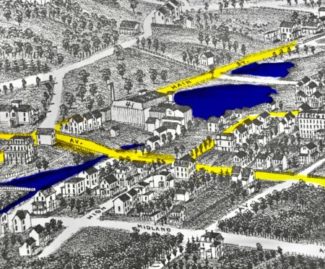 Since the pond went through many changes before it disappeared, it is difficult now to visualize exactly where it was. The flat rectangular plateau near the entrance to NYS Thruway Interchange 11, bounded by Route 59 on the south, High Ave. to the north, and Highland Ave. on the east, is perfectly situated to collect and hold water runoff from the surrounding hills.

The annotated 1884 map of Nyack shows the pond in blue with the outflow heading downhill to a small reservoir. Main Street, 9W and High Ave are shown in yellow. The large building below the pond is the ice house.

The location of the skating pond dam where it leads into the Nyack Brook may still be seen along with a sign at the rear of the Walgreen parking lot. The car wash is just above this small visible slice of the brook.

Michael Hays is a 35-year resident of the Nyacks. Hays grew up the son of a professor and nurse in Champaign, Illinois. He has recently retired from a long career in educational publishing with Prentice-Hall and McGraw-Hill. Hays is an avid cyclist, amateur historian and photographer, gardener, and dog walker. He has enjoyed many wonderful years with his beautiful companion, Bernie Richey. You can follow him on Instagram as UpperNyackMike.