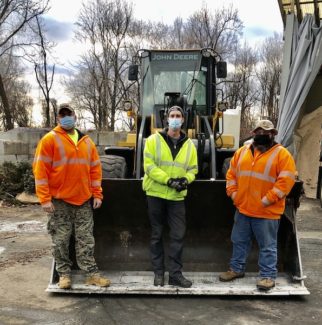 Much like Beth Harmon’s photographic memory of chessboards in Netflix’s The Queen’s Gambit, Upper Nyack’s Department of Public Works employees have a mental map of every inch of every street, curb, drain, and mailbox as they set out to plow snow. Most of us think of snow removal as a brute force problem, but it’s more complicated than that. It’s both science and art.

Imagine being at the wheel of a large plow at night with limited visibility looking for snow covered landmarks, all the while feeling the slight vibration of the snowplow guide as it nears the curb. Zen snow masters William Fay, Chris Gessel, and Mike Nolan, with a combined 34 years of experience, have more than earned their orange vests with their timely plowing.

Much of the DPW employees’ training is on the job, but they also take classes annually from Cornell University’s Local Roads Program that covers pavement maintenance, snow and ice control, and High Speed Snow Plow Training. Some classes include onsite training. Cornell uses Letchworth Village for some plow training. The Upper Nyack crew enjoys the chance to mingle with the larger community of snowplow people to swap tips, techniques, and stories.

Every Storm Is Different 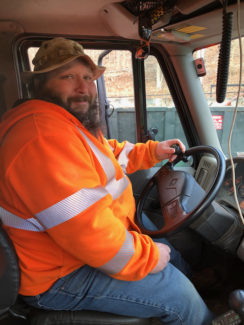 Billie Fay at the wheel of the snowplow.

The crew reminds us that although some storms are similar, no 2 are really the same. Storms arrive at different times, at different temperatures, and at different rates of snowfall. Winds and the combinations of ice, sleet, and snow vary. Forecasts help the DPW make plans but mostly decisions are made on the spot, such as when to salt and how often to plow. They stay on the job until it is done. Fay once worked 27 hours through one storm including breaks for meals and a little rest, sometimes even a little nap on a cot at the DPW garage. The crew has to be ready for any eventuality.

Start with the Hills

Each member of the crew has a set route so that they become experts on the terrain. Throughout the year, they have covered every inch of the roads picking up refuse and leaf bags and maintaining the surfaces. The widths of roads in Upper Nyack vary so it is important to recognize visible snow-covered landmarks, whether the ripple of snow marks a curb or an indentation to a drain marks the edge of a road. The crew communicates with one another via radio to gauge where everyone is and to coordinate their efforts. Senior members Fay and Gessel help Nolan, their newest member. They start with the most difficult hilliest sections and then move to the flats.

After the crew salts as snow begins, they next open up the street, making a couple passes each way starting in the middle, and making further passes as long as the snow falls. When the crew gets a chance, they then plow the edges so that they don’t “lose the curb,” which happens when the mound of snow at the edge becomes frozen and immoveable, narrowing the road. If another storm hits, the road will become even narrower. Drains need to be exposed and open so  that flooding does not become a problem. 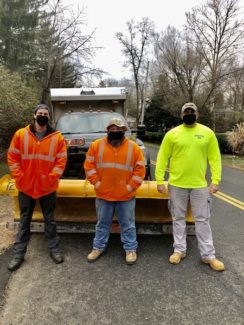 Salt lowers the freezing point of water. It is spread just as it begins to snow so that the first fallen snow melts and doesn’t bond with the pavement, making it easier to plow. The process is repeated as often as needed. Salt is not reapplied if it is snowing heavily for a long period because each new pass of the plow would simply remove the salt. During a December, 2020 snowstorm, the crew opened the road 3 times before re-applying salt when the storm abated at midnight.

Salt usage is metered by the crew, as over-salting affects the environment and adds costs. The exact balance between safe roads and a healthy environment is tricky.

Ice storms are even worse than heavy, deep snow, especially with the many hills in Upper Nyack. Black ice is always a threat to drivers and walkers. They wait for sleet to stop. And when they plow, it comes right off. One time they finished plowing and the snow then changed to about 6 inches of sleet. The heavier trucks sank into the ice and got stuck while the smaller trucks ran on top of the sleet. When a truck gets stuck, it is up to the crew to fix it; there isn’t anyone else to help. The same is true with a mechanical problem.

‘Wait Till We Are Done’

Who hasn’t thought to themselves, “Well, the sun is shining, the plows have gone home, it must be time to get out and shovel”? After much labor, here comes the village plows and the driveway or sidewalk is once again snowed under. Don’t blame our snow specialists. They have to come back and plow to the edge lest they “lose the curb.” Gessel’s advice: “Don’t waste your time if there is still an unplowed strip along the side, wait till we’re done.” Fay adds: “We don’t enjoy plowing people back in.” 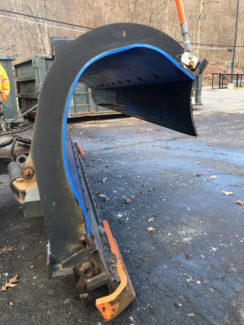 Some people like to park their car on the street so they don’t have to shovel out the driveway. The crew mentions that the hardest street to plow is one with a car parked on the street. “Let us do what we do, and then you can get your car out,” says Fay. This is especially true when they are backing up into a dead-end street with a car at the end.

Yes, those who live on private roads pay taxes and it may seem illogical that the DPW doesn’t plow their roads. But New York State rules prohibit the village from removing snow and ice on private roads except to provide access for emergency vehicles.

Whether it is an icy dusting or the storm of the century, the orange-vested heroes of Upper Nyack will become our most essential workers. Villagers from Upper Nyack might not get any further than the village borders, but their roads will be clear.