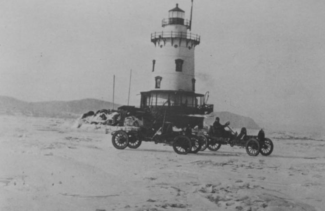 Two racers in their stripped down automobiles in front of Tarrytown light. Supposedly they were racing to Albany but didn’t make it past the Poughkeepsie ferry.

Before the first Tappan Zee Bridge and the George Washington Bridge, there was a winter express route across the Hudson River called the ice bridge. It is hard to conceive of a fully frozen Hudson River today, let alone a defined frozen river crossing from near the foot of Main Street in Nyack to Tarrytown, with cars, motorcycles, trucks, skaters, horses, sleighs, sledders, walkers, and ice boats. Because of salty tides in Nyack’s river-that-flows-both-ways, the river doesn’t always freeze. But in the winter of 1917-18, the ice bridge was passable for 43 consecutive days.

On weekends, the ice bridge would be packed. It took walkers about an hour to cross, a skater 13 minutes, and a car hardly any time at all. Additionally, cross country traffic, including trucks, used the ice bridge. The ice bridge was not only the quickest but the only major crossing in winter months between the 42nd Street ferries and Albany, with the exception of the Poughkeepsie ferry where dynamite was used to keep the water open.

“One inch holds a man, two inches holds a horse” 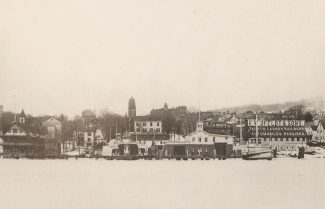 Nyack waterfront from the frozen river in an early 20th century photograph. The ferry terminal is in the center. The ice bridge would have begun in front of the Ofeldt building near the end of Main Street. The Reformed Church can be seen further up the hill in the center. At the left is the Nyack Rowing Association building.

During the coldest winters, early pack ice backs up from Piermont Pier. A small area of open water skins over and thickens. If the surface is covered by snow and rain and freezes quickly, as it did in 1918, a smooth glassy surface appears. Holes were chipped in the ice to determine depth; in some place the ice was three feet deep. The old saying was, “one inch holds a man, two inches hold a horse” so anything over a foot was deemed safe for a car; and anything over that, was safe for a truck.

Near the shore, ice formed from the beach or river’s edge, or was frozen all the way to the bottom. The tides move the rest of the ice up and down. A seam can form between river ice and shore ice. At high tide, river ice is higher and shore ice sometimes hinges up, forming a plank. At low tide, volunteers would place wooden planks for cars to bridge the gap from shore ice down to the river ice. The ice bridge route began at a beach just north of the foot of Main Street. The ice bridge was well defined; walking paths, for the most part, were separate from horse and car lanes. 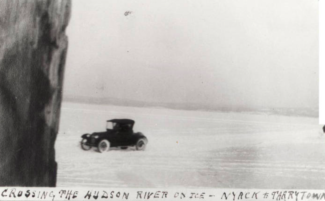 “All Aboard.” The Model A taxi for the 10 minute ride to Tarrytown train station.

Frank “Gimp” Bartow, a Nyack taxi driver, ran a service to Tarrytown and other points in Westchester County for $1. Fast skaters could cross in 13 minutes. A father and son duo from out of state skated from Nyack Beach to Croton Point, down the eastern shore to Tarrytown light and back across to Nyack.

A Nyack High School student rigged up a special “ice boat” by attaching a four-foot sail to his “Flexible Flyer” sled. A friend with skates acted as a rudder. They whipped across the river at what was called, and may well have been, “a mile a minute.” The ride home was not so swift. The friends faced the wind on the way back and the re-crossing took several hours even with the skater sometimes towing the sled. At least they could find hot chocolate offered at restaurants near the foot of Main Street.

The Sinking of Dr. Waldron

A canvas-top Buick touring car like the one Dr. Waldron drove across the ice bridge.

Dr. Waldron, a resident of Yonkers, drove his Buick touring car from Yonkers across the ice bridge to visit his family in Central Nyack. Waldron ignored the wooden planks at the end of the ice bridge, instead aiming closer to the Main Street dock. The Main Street sewer entered the river below the dock making the water warmer and the ice thinner. Waldron’s Buick proceeded to sink slowly near the dock. Waldron was able to crouch on the front seat and push through the canvas top, reaching back to lift his son, who used crutches, out of the car. The top of the car was just above water, the wheels on the river bottom. He was helped ashore and the car was later towed to a local garage, dismantled, dried off, re-oiled, and re-assembled. After a week, Waldron was able to drive back over the ice bridge.

Dr. Carpenter came to Nyack from New York City to take photos of the frozen river from Hook Mountain. He arrived by train and while walking back to the Nyack Train Station he caught a cab driven by Frank Bartow. On the way to the station, the cab swerved and Carpenter’s elbow accidentally went through the glass. At the station, Bartow insisted he pay. Carpenter disagreed. Bartow went for the police and, the next train departure time not being close, Carpenter decided to walk across the ice bridge to Tarrytown. Nyack officer Blakeney, with arrest warrant in hand, caught up with Carpenter at the Tarrytown Train station. He was driven back to Nyack over the ice bridge in Bartow’s taxi. Before the Nyack magistrate, Carpenter agreed to pay and left with no love for the village.

A special horse racing track ran north parallel to the shore about a half mile out on the river, stretching from the ice bridge itself to Hook Mountain. Horses, wearing special spiked shoes, pulled small sleighs known as cutters. Races were common.

Car racing was held on a track slightly south of the ice bridge crossing. Car tires were outfitted with chains with the youngest drivers throwing the cars into skids so they could throw out ice splinters from the chains.

Around 1908, a famous race was held starting down near Yonkers heading north. A race was held pitting the Empire State Express train against a car, a plane, and an ice boat. (We wouldn’t think this much of a race today, but those were the early days for cars and planes.) The train had to make stops so it was more of pacesetter. The car skidded too much on the ice, and the plane had to quarter against the wind so its forward speed was poor. The ice boat was king that day.

The End of the Ice Bridge 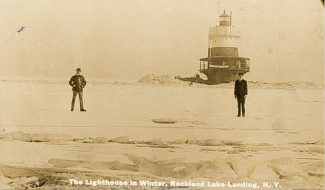 Two gentlemen on the ice at the Rockland Lake Landing Lighthouse. The remains of a light can stile seen offshore from Nyack Beach.

Experienced river men knew when the ice bridge was no longer safe even before the ice would crumble and break into floes. The damage from thick floes can be substantial. At one time, a cross-bay movement forced a floe southwest across the river, hitting the old quarry dock projecting out from Hook Mountain Beach. Most of the dock disappeared never to be repaired.

Temperatures have risen in recent years and our culture has grown more cautious. Today we shudder at the thought of going out on the Hudson River ice; in a car, the thought is unimaginable. Ice bridge adventures now mostly forgotten, we accelerate through our four-lane bridge crossing.

Photos: Courtesy of the Nyack Library

Credit is also given to the Nyack Library History Room for having a copy of Virginia Parkhurst’s notes about the ice bridge that formed the basis for this article.