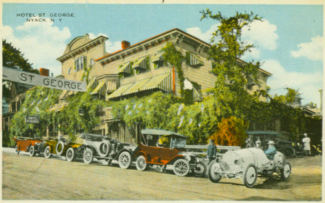 St. George circa 1920s. Cars are lined up. The auto park is on the right. A chef stands near Piermont Ave. Ivy festoons the hotel and a banner crosses the street.

If you wanted to know what was going on in Nyack, the St. George Hotel was once the place to be. Established in 1885 when Nyack was a go-to summer resort for wealthy city dwellers, the hotel featured the finest meals in Nyack by a French-speaking proprietor, George Bardin. Located on Burd St. not far from the Nyack Ferry, the St. George was a favorite way station for travelers heading upstate and for day trippers from NYC. The restaurant became the meeting place for innumerable civic events and banquets into the 1960s long after the hotel rooms had seen their better day. Renovated in the 1980s, the hotel became the home of 10 antiques shops during the period when Nyack was the antique capitol of the Hudson River Valley. In 2004, another renovation to create offices and retail space earned a Historic Preservation Merit Award. 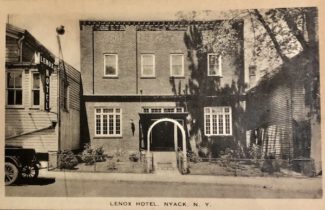 Postcard of the Lenox Hotel at 80 Burd St.

Suddenly there was new competition for the aging St. George Hotel just up Burd Street. The Lenox Hotel opened during the 1920s. It ran the length of an entire block with an entrance to the hotel at 80 Burd Street and to a restaurant at 87 Main St. The Lenox advertised as “Rockland County’s most modern hotel on the Hudson.” Like the St. George they offered facilities for banquets and clubs, like bridge clubs in the cocktail lounge, dinner dances in the ballroom, and quiet dining in the English Grill Room.

In 1939, the hotel was extensively renovated by John Hickey and became known as the New Lenox Hotel, hosting floor shows such as an international Spanish dance team from South America in the Continental Room. The tap room was staffed by “Doc” Wilson known for his Welsh rarebit. 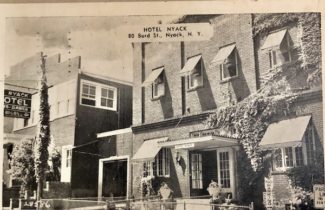 Lenox remodeled as the Hotel Nyack. 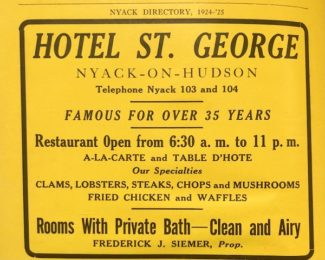 In 1943, the hotel was rebranded as Hotel Nyack and continued to operate until around 1963 when Charles Rubin tried unsuccessfully to buy it to house his Nyack Music Store. His store on Main St. was eliminated by urban renewal. But Rubin was not able to complete the transaction and the hotel went into serious decline.

Despite the new downtown competition, the St. George remained the premier banquet facility in Nyack. The hotel trade was surely less as the Nyack Ferry business declined. The St. George became a place for locals with a less elegant menu. 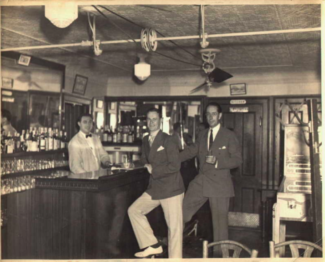 The St. George Tap Room. Note the mechanical fans on the ceiling. Courtesy of the Nyack Library.

In the early 1940s, the St. George was owned by Stanley Porter and managed by Thomas Reynolds, Jr. The bedrooms were redecorated. In the restaurant, steak and lobster were now the specialties of the house.  After dinner ,dancing became the new normal. 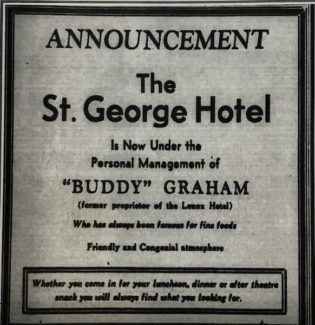 Just after the war, the hotel was owned by Joseph Leone and managed by “Buddy” Graham, the former proprietor of the Lenox Hotel, “who has always been famous for his fine foods.” Business was on the increase at the restaurant and the cocktail bar where Charles MacArthur and Ben Hecht could sometimes be found.

The menu was changing. Broiled live Maine lobster served with cole slaw and French fries was $1.25. Sunday dinner was classic midcentury modern. Chicken fricassee, roast turkey, lamb chops, fried chicken, minute steaks, and fried smelts were the main courses. You could begin with tomato juice, a chilled fruit cup, or a clam or shrimp cocktail. A sirloin steak meal was $2.00, everything else was around $1.50. 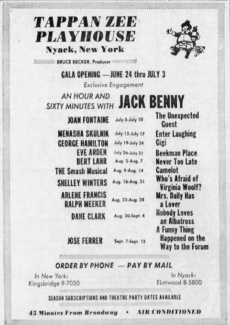 Ad for An Hour and Sixty Minutes. Note the list of stars.

In the summer of 1965, the Tappan Zee Playhouse on Broadway opened its summer season with a musical revue, An Hour and Sixty Minutes with Jack Benny. It was a sellout. Seating capacity was increased to 789 for the dozen performances of the play according to the New York Times. On opening night, limousines from NYC lined the streets launching black tie and dinner dresses onto the streets. People wandered back and forth between the St. George and the theater before curtain time looking for Jack Paar and Soupy Sales who were rumored to be in the audience.

The grande dame of Nyack, Helen Hayes, was escorted by Dr.  Virgil Danson, an obstetrician who summered in Suffern and the author of the book, I Learned About Women From Them.” Susan Rich, an artist whose work was featured in the playhouse gallery, was described as wearing a black ankle length crepe dress with a chiffon Gaugin print stole and black crepe slippers by Roger Vivier. She carried a Parisian handbag of beaded jet. After the show, the producer held a reception and buffet for 300 at the St George. 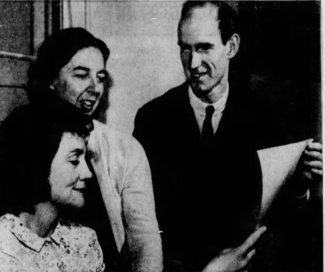 Win Perry as President of the Nyack Civic Association preparing a tribute at a banquet.

Not all the banquets were as elegant but all types of events from political party meetings, local civic groups, sports groups, and charities were held at the St. George. In 1963 Nelson Rockefeller gave autographs following a formal conference. President of the Civic Association of the Nyacks, Win Perry, Jr. awarded a citation to the rector of Grace Episcopal at the association’s annual buffet in 1965. 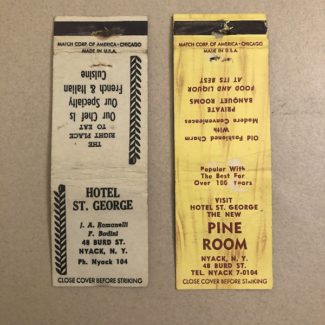 During the 1960s, Eddie Nolan, famed innkeeper of many restaurants including Eddie Nolan’s in S. Nyack, managed the St. George. Eddie Nolan would ring the bar’s ship bell and announce, “Happy Hour”.

By the 1970s, the aging St. George was no longer suitable as a hotel. Different restaurants tried to make a go of it. For a time, a restaurant with southern cuisine was there. The days of the old St. George were numbered. 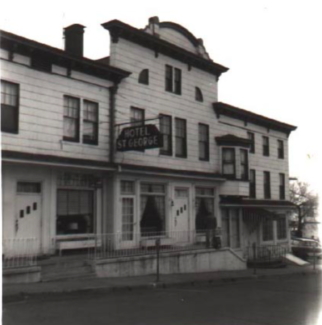 The sad exterior of the st. George in 1960. Courtesy of the Nyack Library.

In 1979, George Marsilio, the owner of the popular Hi-Ho restaurant located at 65 Main just behind the St. George, came to its rescue. The Hi-Ho was itself a favorite meeting place for reunions, sports banquets, and newspapermen when the Journal News was still located in Nyack. Marsilio acquired the St. George for $150,000. People said he was crazy; it was a wreck. Marsilio replaced 67 windows, replaced floors and the rotting sandstone foundation, and removed many of the walls. 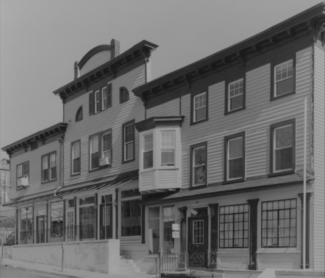 St. George in 1984. The renovation has improved the exterior appearance but the porticos are gone from the porch. Courtesy of the Nyack Library.

The building was full of surprises. Marsilio discovered some of the features of the original building including notch and beam construction, forged nails, Victorian gingerbread at the eaves and windows, and a solid mahogany bannister.  Marsilio found two carved columns hiding behind a wall and a large safe tipped on its side that was being used to support the building. One of the first businesses to open in the renovated St. George was the 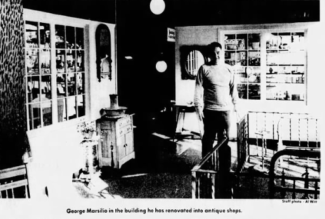 George Masilio in an antique shop in the renovated St. George.

For many years Nyack was an antique mecca. Shops lined the business district including ten in what was called the Nyack Antique Mall located in the Prudential Life Insurance Building (now the home of the RCC Culinary center and Hudson Market). The antique mall opened in 1974 but in 1979 the owners were given little time to move out after being evicted on short notice when Prudential Life needed more space.  Shops like the Remember When and Onyx ‘N’ Rugs scrambled to find new space during the key selling season. Business was already tough due to the Arab oil embargo that limited the number of out-of-village visitors. Masilio had long planned to have an antique shop in the St. George, so when antique shop owners needed a new address, he was ready. 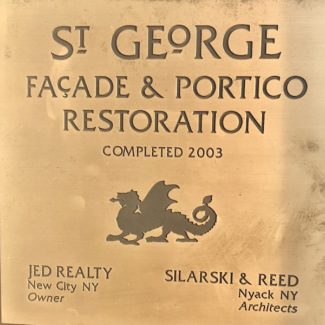 Plaque commemorating the exterior renovation in 2003 by Silarski & Reed.

By 2000, the St. George was owned by JED Realty partners Joe Maraia and Ed Mistretta. After some 120 years the front was deteriorating, the portico over the porch was gone, and the building did not meet modern building codes. Bob Silurski, long-time Nyack architect and principle of S&CO Architecture, recalls being hired to design the renovation. His company , then named Silurski & Reed ,was located just across the street at 59 Burd St..  Silurski recalls the difficulties in making the St. George accessible. The building had narrow hallways with seven levels of flooring and no elevator. It was a tough problem; the interior was what Silurski called a rabbit warren. The rooms were large with tall ceilings, some with transoms over the door. The rooms reminded Silurski of the Adelphi Hotel in Saratoga Springs. Silurski was able to obtain variances. 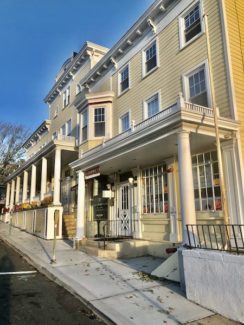 Of great importance was the renovation of the exterior. The decaying siding was replaced with Hardie fiber cement siding, and working from an old postcard of the St. George that Maraia had found at a Nyack Street Fair, the portico with columns and railing were restored. A gable roof over the third floor was replaced with a flat roof and what was an attic is now office space. The pediment on the third floor was refurbished with a new Hotel St. George logo complete with a dragon medallion.

The owner’s concern for authenticity and the design solutions of S&CO Architecture were so outstanding that the renovation received the Historical Society of Rockland County’s prestigious Historic Preservation Merit Award in 2004. The St. George has been the home for a number of businesses ever since.

Little did George Bardin know when he established the St. George Hotel from several existing buildings that its handsome frontage overlooking the Hudson River would be one of Nyack’s historic gems over 135 years later. It is a testament to those who have taken the time to preserve our heritage and find new uses for historic buildings. The St. George Hotel has been a silent witness to Nyack’s passage of time, from its horse-and-buggy days, visiting river yachts, and the Nyack Ferry through the automobile and antique eras. It is a story worth celebrating.

Illustrations: Unless otherwise indicated, postcards from the Robert Courtwright Collection, Historical Society of the Nyacks, current photos by the author.

Part One: Bustling Burd St. & the Founding of the St. George Hotel