Photo of Rockland Airport circa 1937.

Dr. Pierre Bernard whose visionary yoga club in Nyack foretold today’s interest in yoga, also jumped on the aviation craze in America after Lindbergh’s cross-Atlantic flight to build Rockland’s first airport in New City. Rockland County Airport, on Brewery Road opposite the site of Rockland’s first brewery, was opened in 1928, the same year as did Newark and Teterboro airports.

As much entrepreneur as visionary, Bernard had made a runaway success of his Clarkstown Country Club capitalizing on the affluence of the Jazz Age to become the largest landholder in the Nyacks. By 1928, he had his first elephant, a zoo, had sponsored the Nyack semi-pro baseball team, and been elected chairman of the Nyack Athletic Club. Nor was he done when he built the airport, he was soon to build a new sports arena in Central Nyack.

Bernard was great at starting new ventures whether they made business sense or not. He seemed to tire of management details and many of his ventures soon went by the wayside. The Rockland Airport quickly fell out of favor early in the depression as did the Clarkstown Country Club many years later albeit much more slowly. 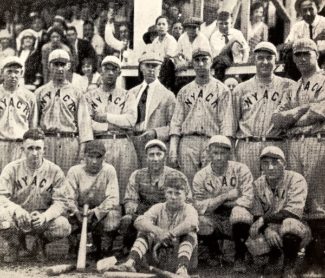 Pierre Bernard (center) with his baseball team at his stadium.

Dr. Pierre Bernard’s club focused on the study of yoga and Vedic philosophy moved to Nyack in 1920, first buying the large Maxwell estate and Nyack Country Club and then the 30+ acre Stephen Bradley farm on the hills above South Nyack. Bernard was well funded by sponsors like Anne Vanderbilt, the Kay family of Pittsburgh, and the Wertheim’s from NYC. There seemed to be no end to the largesse of families inspired by his regimen of physical health and global spirituality.

In 1922, Bernard had moved into the Bradley farmhouse called the Eagle’s nest, converted a stable to a theater and library, rehabilited a live-in club house and other amenities. The club amazed, and infuriated, some villagers by holding outrageous festivals and masked balls such as an all-night festival one spring at the supposed birth date of Buddha. The Inner Circle Theater held any number of theatrics including dance performances. He continued with amateur baseball games after his semi-pro team lost too much money.

He started his “zoo,” a mix of animals that included Baby, his first elephant in 1928, along with a 40-foot South American snake, pheasants, monkeys, goats, and horses. More elephants would follow as did summer circuses into the 1930s. 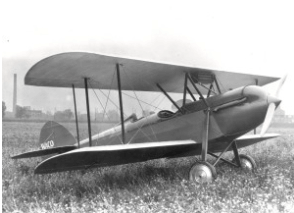 In early 1928, Bernard was the driving force behind the start-up of the Rockland County Aero Club bringing together those who dreamed of flying as a sport and as a business. Just as he had organized his Tantric Club years earlier, he was soon elected president, held meetings every Friday at the Clarkstown Country Club, wrote the charter for incorporation, and, according to Robert Love in The Great OM, “hired his friends as lawyers, publicists and trainers, and opened lines of communication with the federal government.”  By the end of March, the club had over 100 subscribing members.

Drawing from his personal network, Bernard enlisted two Clarkstown Country Club members who were experienced pilots; John Jacob Niles, a musician, was a WWI airman and Major Francis Yeats-Brown, a yoga enthusiast who had studied yoga in India and flown military missions in Mesopotamia. Other trained flyers became club members. At their weekly Friday meetings, the club watched movies about aviation including Byrd’s and Amundsen’s polar flights and heard lectures on dirigibles, blimps, and gliders.

The Aero Club mission was to certify pilots of all kinds whether “transport, commercial, industrial, or private pilot.” By April, Bernard was elected President of the Rockland County Aero Club, Inc. 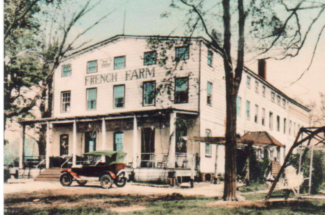 Postcard of the French Farm in the old Brewery building. Courtesy of the Nyack Library.

In early May 1928, the Aero Club acquired the 50-acre Schomberg farm in New City on Brewery Road near the intersection with Lafayette Road.  The site was a rural location yet well-known and busy because it was across from what was once the home of Rockland’s largest brewery built in 1855 and known for its summer lager. Around 1880 the brewery became a wine and vinegar factory, then a meeting and dance hall called the Old Rockland Brewery Hotel.  In 1921, the brewery became a summer resort and spa called the French Farm owned by the Meriaux family including a swimming pool and garden with lights, restaurant, and soda fountain.

The relatively flat farm allowed for 2,500-foot runways in any direction after tractors and teams of men graded the land and removed obstacles. The airfield was equipped with wind indicator, flood lights and markers. An 80′ x 100’ hanger was added later. A local farmer was given the ability to sell snacks and gas. By the time the field was completed the Aero Club had grown to 150 subscription members.

Opening Day at the Airport 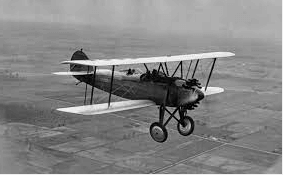 On Memorial Day weekend in 1928 some 2,500 people showed up for an opening day gala. Several hundred cars parked on the grounds and others lined Brewery Road for miles in either direction. The show started with 3 single engine, two-winged Waco planes arriving from Curtiss Field, a commercial field on Long Island. The pilots performed loops and spirals, barrel rolls, the “falling leaf” maneuver, and a close buzzing of the audience. Arrangement had been made for ten lucky guests to get free rides on planes. As luck would have it, the threat of rain turned into rain, and many of the planned events didn’t take place.

19-year-old John Clausen’s parachute demonstration was delayed by the rain. Clausen had already made some 300 jumps. They left it up to Clausen to decide whether he would jump or not and after an hour delay, Clausen and pilot Barlow took off in a Waco and went up to 1,500 feet. Clausen left the front cockpit but apparently slipped on the wet step and fell. The force of his fall broke the rope of a protective canvas bag meaning that his chute could not open. He fell in a horizontal position and never straightened up landing some 50 feet from the field and making a two-foot hole. He died instantly. Bernard and a State Trooper removed the body. 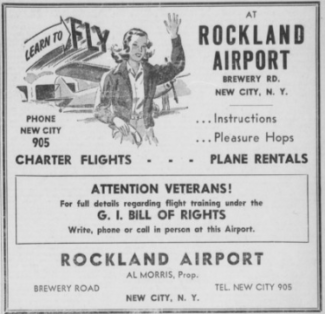 Tragedy notwithstanding, the Aero Club made efforts to expand the airport into one of the finest in the Hudson Valley. A new hanger was built to house 25 planes in July. A ballfield was built on the north side of the airfield. Lieutenant Helger Harris, who recently arrived from Holland, took sightseers for flights.  Some 55 people a week took sightseeing tours with Bernard’s guests and club members going first. The club made arrangements to purchase a $6,000 plane to take people on short haul “express” trips.

In November 1928, the corporation signed a 10-year contract with the Department of Commerce to use the airfield as a station and emergency landing field on the New York, Albany, Montreal and Buffalo air mail routes. The government agreed to pave the airstrip, add lights, and spend $25,000 improving the facility. Club members were allowed to use the airport but under government rules no commercial flights were allowed.

In less than a year, Bernard had started a club, built an airport, funded it, and enchanted the people of Rockland. 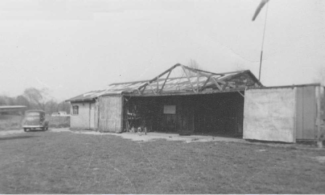 Like many of Bernard’s ventures, the airport didn’t last. In 1931, the government reverted their lease back to the Aero Club for which they had only paid $1 annually.  With no income, and some $3,500 still owed to Bernard, the Aero Club was now in financial trouble. Nearby, the Christie Airport opened as a commercial airport just north of Rockland Airport on Old Route 304. Without a competitive position and without financial backing, Bernard simply lost interest in aviation and refocused his time on building a new club house in South Nyack. The Aero Club disappeared into history.

The Rockland Airport continued on, managed most of the time by the Calabrese family after the departure of Bernard according to the authors of The History of Aviation in Rockland County, one of which, Ross MacVicar, became the airfield manager until the airfield closed in 1949. The land was later developed for housing.

The Dream of Flight 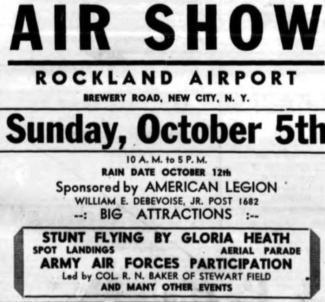 Ad for an air show at Rockland Airport just before its close.

The early dreams of flight inspired by Lindbergh produced visionary entrepreneurs like Bernard who stepped up to make the dreams of flying actual. Many of Rocklanders’ first flights were taken from the Rockland County Airport. As it turned out, dairy cows did not stop giving milk due to plane noise as some had feared. Flying, although still interesting, became an everyday experience.  Both Bernard’s Rockland County Airport and the Clarkstown Country Club are now distant memories; the airport is the site of residences and the Clarkstown Country Club merged first into Nyack College and is now a part of Yeshiva Viznitz.