The second annual Rockland Fashion Week put Nyack and surrounding communities in the tri-state back on the map of the international fashion world after a gap year due to the pandemic. The first Fashion week was held in December of 2019. 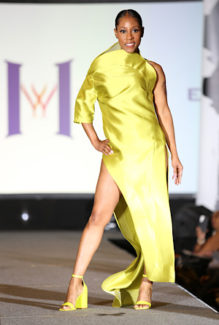 Produced by Hope Wade Designs of Nyack, the kick-off event on Saturday, November 6 at the Palisades Mall in West Nyack drew an enthusiastic crowd of over 300 guests. Guest fashionistas – which, according to the dictionary definition, includes men as well as women – dressed to show their personal style.

“Building on the success we had in 2019, this year’s kick-off was bigger and even more exciting,” said Hope Wade, owner of Hope Wade Designs and event producer.

“The main runway event showcased the work of 14 designers including four from Rockland, plus lead makeup artist Litha Vazquez from Project Runway, JayLee and Sephora for makeup products, and more than 40 models including the Faces of Beauty Model Team,” added Wade.

In addition to Rockland-based businesses, participating artists brought their skills and wares from neighboring Westchester, as well as New Jersey and Connecticut. Live music was provided by crooner Mark Wade, Dance Hall Pastor Stephen Blake who hails from Jamaica, and a guest artist from VP Records. 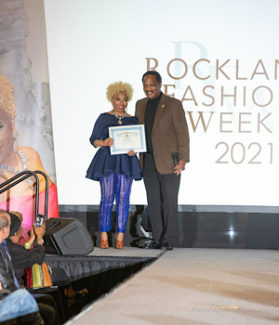 Also at the event, Rockland County legislator Toney Earl presented Wade with a Distinguished Service Award, the highest honor bestowed on citizens for their service to the county. State Assemblyman Mike Lawler delivered a proclamation congratulating Wade on the success of Fashion Week and recognizing its positive impact on Rockland County.

Part of the proceeds generated by the runway show were donated to People to People, an organization which for decades has been helping the community’s most vulnerable citizens meet their basic needs. Lourdes Pring, People to People Board member, accepted the donation check from Wade.

Beyond the launch event, Rockland Fashion Week features discussions about the fashion business in local schools, and pop-up shops in Nyack at Hope Wade Designs at 23 N Broadway and the Maria Luisa boutique at 77 S Broadway, as well as at A Time To Clothes in the Mall.

Wade courageously opened shop in September of 2020 while the pandemic was still raging. Since then, she has managed to keep her business humming, creating couture dresses and gowns for women and children. She selects materials, designs, sketches and sews every garment she sells. 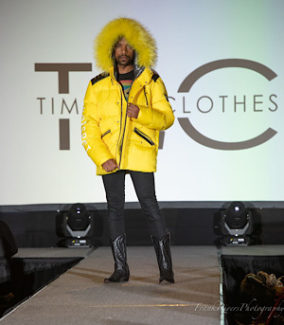 Wade’s goals for the future are nothing short of remarkable. “I want Rockland Fashion Week to become a staple in Rockland County that not only showcases clothing designers, but becomes a full-time employer and a training school for models,” said Wade.

“I want to build a factory so that designers, especially those of color, have a facility to manufacture their clothing. I would love to give a scholarship annually to an emerging designer – with no age limit. It would also be fun to create a fashion talk show and a shopping network.”

Why Nyack, and why Rockland as the place to pursue her dreams? Wade’s answer: “Nyack reminds me of Port Royal in Kingston, Jamaica where I grew up. Nyack is a town with special charm. The riverfront – and the people – are beautiful.”

How did Wade become a fashion designer? Here’s how she tells it: “About 30 years ago, I was planning to attend a New Year’s Eve event that required formal attire. I didn’t have a proper dress. So I made one, drawing on my arts education, which I was fortunate to get at Cooper Union in New York City. All my friends loved the dress and started ordering their own. The rest of the story is still unfolding.”

Fashion isn’t the only arena where Wade is making a mark. She was recently elected president of the Jamaican Civic & Cultural Association of Rockland (JAMMCAR), a decades-old civic organization that provides a platform for politicians and community leaders to discuss local issues. Among other activities, the organization awards scholarships to local high school students headed for college.