For over three centuries, the hamlet of Tappan has offered a pleasing mix of history and small-town scenery.

More than a half dozen of Tappan’s historic sites lie within an 85-acre historic district. The district was created in 1966 by an Orangetown ordinance, the first of its kind for a town in New York State.

The name Tappan is derived from a Lenape Indian word thought to mean “Cold Water.”

Recently I walked the historic area beginning with a visit to the DeWint House, its grounds, and Carriage House Museum. I then drove two blocks and parked at the entrance to Tappan Memorial Park. After crossing a small bridge over the Sparkill Creek adjacent to the town library, I surveyed homes with historic markers on Main Street and Tappan Road.

This was followed with a visit to the 76 House, Tappan Reformed Church, and its adjacent cemetery.

My visit was completed with a drive to the top of Andre Hill where the British Spy Major John Andre was hanged.

The DeWint House, built in 1700, is also known as the George Washington Historic Site at Tappan. New York served as the headquarters for General George Washington four times during the American Revolution. Most notably it was here that Washington signed the death warrant of British Major John Andre, a spy who conspired with American General Benedict Arnold to betray West Point. This took place during his September 28 through October 7th residency.

Washington returned in early May of 1783 after the war ended to negotiate the final withdrawal of British forces from New York City with British General Guy Carelton.

The DeWint House’s bottom floor (the top floor is off limits) houses the North and South Rooms. The South Room was where Washington and his staff resided and the North Room was where work was done, especially with regards to the trial and execution of Andre. The rooms are both open to the public for viewing through glass partitions. Period furniture, bedding, and desks are among the items you’ll see.

A walk on to the very scenic grounds offers flower gardens next to the buildings, tree plantings, and an area with grave markers of slaves that lived in or within two miles of Tappan and died in the area. This includes two slaves that belonged to DeWint House owner Daniel DeClark. Slavery would not be abolished in New York State until 1827.

A survey of the tree species on the grounds includes American Larch, American Sycamore, Red Maple, and a Redwood Tree. A “shoot” from a Weeping Willow Tree that once grew on the property can be found growing quite tall adjacent to the Carriage House. The original tree was destroyed during a storm in 1987. It was considered the largest Weeping Willow tree in the United States. 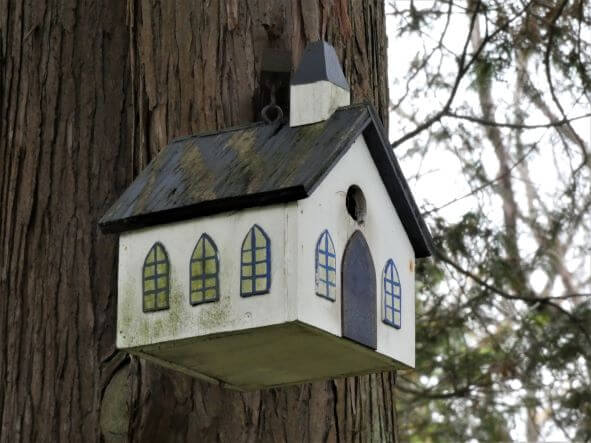 There is also an interesting collection of bird houses hung from various trees on the grounds including one constructed as a log cabin, another as a church.

There is a table of artifacts discovered during an archaeological dig of the house done in 1994. A 15- minute video about the historic site can be seen and an over 150-year-old grandfather clock keeps the correct time.

There are also at least a half dozen picnic tables on the grounds, some of them recently put in.

The George Washington Historic Site is part of the New York State Revolutionary War Heritage Trail, and is also a Registered National Historical Landmark. The DeWint House is the “oldest surviving structure in Rockland County and an outstanding example of Colonial Dutch architecture in the Hudson Valley,” this according to a brochure about the site, available at the Carriage House.

The George Washington Historic Site is open daily 10 to 4p. The buildings are closed on Mondays.

Tappan Memorial Park offers benches, a short walking path and a pond area. Fall colors from the park’s trees (past peek) reflected their mirrored images nicely on the water as I continued my walk. Several years ago, a tree was planted here in honor of longtime resident and internationally famous jazz musician Tito Puente. The Park is open daily dawn to dusk. A small bridge which crosses the Sparkill Creek connects the park to the back parking lot of the Tappan Library and Main Street.

Along Tappan Road and Main Street there are numerous homes listed on the National Register of Historic Places.

The 76 House Restaurant on Main Street, my next stop on the walk, dates to 1686 and was “expanded in 1755 to accommodate the town’s need to provide hospitality to stagecoach travelers.”  It is considered one of the country’s oldest taverns in the country. On my visit the WWB Jazz Band performed in the bar area as I glanced the menu to see what 18th century entrees were still on their menu.

Turns out that there were at least three menu items. These were Yankee Pot Roast, Blue Claw Crab Cakes and Roast Duckling.

Known as Mabie’s Tavern during the American Revolution, the establishment was where British Major John Andre was incarcerated during his espionage trial, which happened just steps away at the Tappan Reformed Church.

Andre was caught in Westchester County with the plans for West Point in his stockings given to him by American General Benedict Arnold. He was transferred as a prisoner to Tappan where he was jailed, tried, and executed as a spy on Oct. 2, 1780.

The tavern was a popular watering hole for Continental Army officers including Generals Anthony Wayne, Nathaniel Green, Henry Knox, Baron Von Steuben and Washington. Alexander Hamilton enjoyed the tavern so much he lived there for two years in an upstairs room at the time.

These already mentioned officers presided over Andre’s trial at the reformed church.

The Tappan Reformed Church, a short walk from the 76 House, was my next stop. The church also served as a military hospital during the revolution. Specifically, this was where soldiers belonging to Colonel George Baylor’s Third Regiment of Continental Light Dragoons were taken after being brutally attacked in a surprise raid as they slept in several barn buildings in Rivervale, New Jersey during the night of September 28th, 1778. Known as the Baylor Massacre, British forces under Maj. General Charles Grey killed 11 of Baylor’s Dragoons outright. Altogether 69 soldiers were killed, wounded, or taken prisoner. The injured were taken to Tappan.

A marker on the grounds near the cemetery commemorates the bloody event.

A walk through the cemetery revealed the names of early Tappan settlers with headstones dating back to and before the American Revolution. The cemetery dates back to 1694.

The Tappan Village Green located across the street from the church was the site of the first courthouse in what was then part of Orange County.

Around the corner from the 76 House are the grounds and buildings of (home and barn) The Manse.

The Manse, built in 1729, was the home of Domine Samuel Verbryck who founded Queens College in New Brunswick, New Jersey, now Rutgers University.

From there a short drive on Old Tappan Road to Andre Hill (a left turn at a historic marker just after a four-way intersection or right turn if coming from NJ) brings you to the site where the hanging of Andre took place. A stone monument surrounded by an iron fence replaces the hanging tree. The area is residential.

As previously mentioned, this is the site where Andre was executed. In part the wording on the monument reads, “Here died October 2nd, 1780, Major John Andre of the British Army who entering the American lines on a secret mission to Benedict Arnold for the surrender of West Point, was taken prisoner, tried and executed as a spy.”

For those with an interest in history and scenery, not to mention excellent dining opportunities, the hamlet of Tappan makes for an excellent day trip destination.