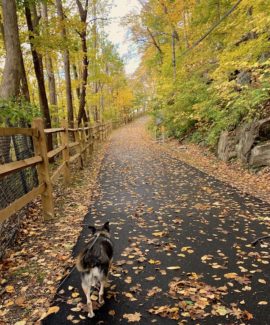 The Jones Point Path just south of Bear Mountain State Park on 9W offers a quiet walk in the woods or a short car free / care free bicycle ride along the Hudson. In addition to spectacular Hudson River views, the path is adjacent to several historical points of interest.

Suitable for hikers and bicyclists, the paved multi-use path is two miles in one direction. If you include the short walk/bike from your car through the residential area prior to the paved trail, it’s about five miles out and back.

The Jones Point Path was built on the roadbed of the original NYS Rt 9W which is east of the current state road. Tri-state area cyclists cheered the new path when it was opened in October 2020, as it provided a safer alternative to a dangerous, narrow stretch of 9W which area cyclists had previously needed to ride to Bear Mountain State Park. It took seven months for the NYS Department of Transportation to complete work on this $2.2 million construction project.

budget was $2.2M and it took 7 months. Construction by NYS DOT

This section of Old 9W has been closed to motor vehicle traffic since 1931 when a 2.44-mile bypass was blasted into the side of Dunderberg Mountain. 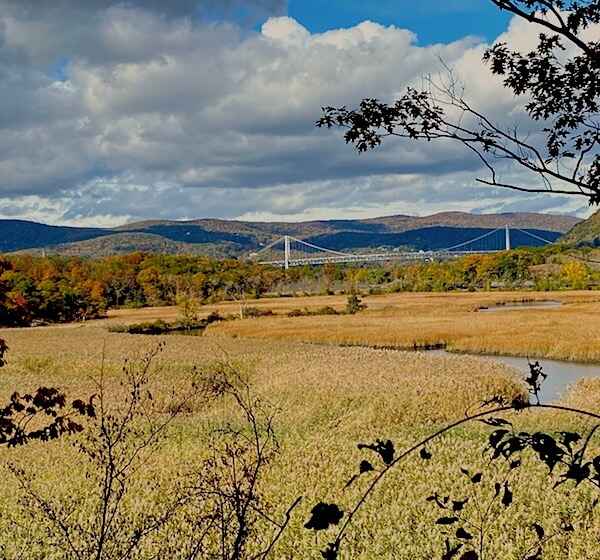 Ghost Ships and a Ghost Railroad, too.

Jones Point served as a nautical parking lot for surplus World War II era ships. The Hudson River Reserve Fleet — aka the “Mothball Fleet” — moored combat vessels and transports in the Hudson River near Jones Point from 1946 until 1971. The fleet, which included as many as 189 ships anchored in ten rows in the mid-1960’s, extended into the river from the Jones Point dock.

The neighborhood also includes remnants of a 19th century tourist railroad which, despite a $1 million investment, was never completed. The Dunderberg Spiral Railway was intended to be a tourist attraction using rail cars pulled by a stationary steam engine to the 1086 ft peak of Dunderberg Mountain before gravity took over to send thrill seekers through tunnels around the mountain at speeds approaching 50 mph. Although the project was abandoned, you can hike the Dunderberg Spiral Railway/Bald Mountain Loop to review what was started more than 130 years ago. The trail head for the Dunderberg Mountain hike is a short walk from where River Rd and 9W meet.

Just Beyond The Path: Birds and Bear Mountain

Once upon a time, Iona Island had an amusement park and…a weapons depot. Today the 270 acre park is the home to bald eagles, minks, muskrats, and snapping turtles. Iona Island is a bird conservation area sited in the largest tidal wetland along the Hudson. In the late 1800’s Iona Island was a summer resort complete with picnic facilities, a carousel and a Ferris wheel. In 1899 it made a hard turn from summer fun to national defense, serving as a naval weapons depot until the mid-1960’s. It’s current owner, the Palisades Interstate Park Commission, purchased the property in 1965. The Rockland Audubon Society commends Iona Island as a “birding hotspot,” best known for its wintering bald eagles.  The access road to the Iona Island National Estuarine Sanctuary and Research Reserve is about a mile from the northern terminus of the Jones Point Path. 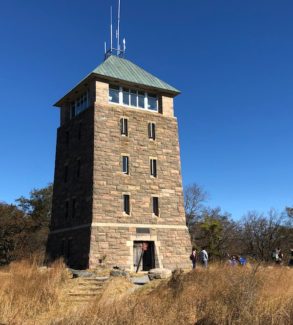 Named for its shape resembling a bear lying on its back, the 5,205 acre Bear Mountain State Park has something for everyone in every season. Amenities include the Trailside Museums and Zoo, a skating rink, a carousel, a swimming pool, a ball field and the quaint Bear Mountain Inn, as well as numerous hiking, biking and cross-country ski trails. Some of the best sights to be seen in the Lower Hudson Valley can be viewed from the top of Perkins Memorial Tower (open from April through late November, weather permitting). Here are two Bear Mountain fun facts, courtesy of Wikipedia: The Brooklyn Dodgers held their Spring Training at Bear Mountain during WWII and the park was once considered to be the premier ski jumping site in the United States.

Dave Zornow is co-founder and Publisher Emeritus of Nyack News and Views and a board member of the Rockland Bicycling Club.