Part One: Bustling Burd St. & the Founding of the St. George Hotel 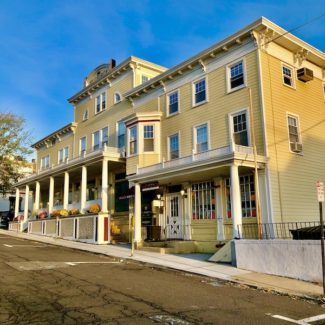 If you wanted to know what was going on in Nyack, the St. George Hotel was once the place to be. Established in 1885 when Nyack was a go-to summer resort for wealthy city dwellers, the hotel featured the finest meals in Nyack, from a French-speaking proprietor, George Bardin.

Located on Burd St., not far from the Nyack Ferry, the St. George was a favorite way station for travelers heading up state and for day trippers from NYC. The restaurant became the meeting place for innumerable civic events and banquets into the 1960s, long after the hotel rooms had seen their better day.

Renovated in the 1980s, the hotel became the home of 10 antiques shops during the period when Nyack was the antique capitol of the Hudson River Valley. In 2004, another renovation to create offices and retail space earned a Historic Preservation Merit Award.

As the only remaining hotel building from the Gilded Age, the St. George is today slightly out of the main orbit of Nyack restaurants and shops, although lower Burd St. was once a bustling thoroughfare. Its river-view front porches and windows whisper of the many life stories that crossed its floors, from Presidents to charlatans. Here is its story. 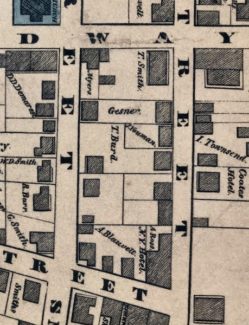 1859 view of Thomas Burd’s house on Franklin and High St. just below the Pavilion Hotel.

With the ferry dock at one end, Burd St. was as busy as Main St. during much of the 19th century. The street was named after Thomas Burd who was born in Haverstraw and moved to Nyack after marrying into the Tallman family, the original settlers of Nyack. Burd was, for a time before the Civil War, the sole house builder in Nyack. He built two large Italianate-style buildings on Main St. for Tunis and Isaac Smith and his own Italianate-style house on High St. near Franklin. His carpentry shop was on a large plot of land on Burd St. in the middle of the block between Broadway and Court St. (as Piermont Ave was called in the early days). This plot of land was to form part of the St. George property. 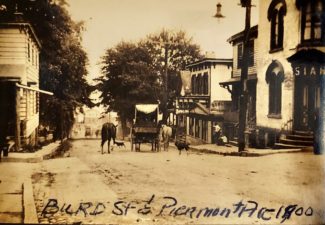 Looking east down Burd St. from Piermont Ave. On the corner right is the office of the Nyack Evening Star, next a bowling alley and saloon. At the bottom of the street is the Nyack Ferry.

By 1884, with the center of Nyack shifting to Broadway and points west, Burd St. became even busier. Among businesses located on the street, starting at the ferry dock and moving west, were a shoe and a hat factory across the street from each other. Next was the three-floor Smithsonian Hotel with river views. At the intersection with Piermont Ave. (then called Court St.) was the Rockland County Hotel in the former Rockland County National Bank building, William White’s general store, and George Smith’s candy and grocery store. Just up Burd St. before Broadway was Blauvelt’s Livery, next to it a beer bottling business, and at the corner with Broadway, a pharmacy.

In 1885, George Bardin acquired two tall wooden buildings that were very close to each other and formed the St. George Hotel. The buildings were probably built in the 1870s, and straddle the old Thomas Burd property.  As would be typical of the time, they both would have had a retail business on the first floor and living quarters above. The historical record is unclear as to what these buildings contained. Ownership changed several times before 1885. One source refers to one of the buildings as the Fowler & Smith Building. One reference states that Thomas Matthews had a restaurant and boarding house there. The Sanford Insurance maps show ownership of one building by John Taylor, who ran a real estate and insurance business in Nyack.

In any evert, the two buildings formed the eastern 2/3 of today’s St. George Hotel. The buildings were joined in front sporting a bay window and the space between the buildings was kept as a ventilation shaft. The hotel entrance was on the eastern side with a tap room in the southeast corner. The restaurant was on the left. The St. George was expanded over time. By 1910, a third building had been attached to the restaurant section along with a “cottage” that maybe be the house that now stands at the northwest corner of the building. An auto park was added around 1913. It is unclear how many guest rooms the hotel contained. Judging from a reservation book it was perhaps on the order of 20 rooms. The largest had baths. Most had river views.

Views of the Development of St. George Hotel over 32 years 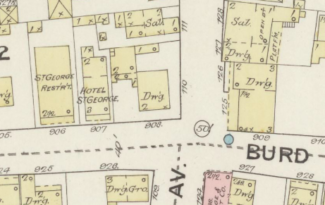 1886 footprint of the Hotel St. George shows two buildings with restaurant on the left.

1896 footprint of the St. George Hotel 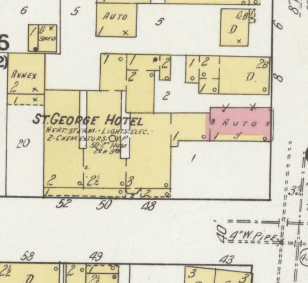 1919 footprint of the St. George Hotel. Three buildings are connected. An auto park is on the right and an annex of “cottage” is attached to western side.

St. George was a common name for hotels in the Gilded Age. Nyack’s St. George probably takes its namesake from the Hotel St. George  in Brooklyn Heights, built in 1885. It was was the largest hotel in the city, containing 2,632 guest rooms, employing 1,000 workers, and feeding 7,000. No wonder George Bardin named his hotel after the huge hotel in Brooklyn. 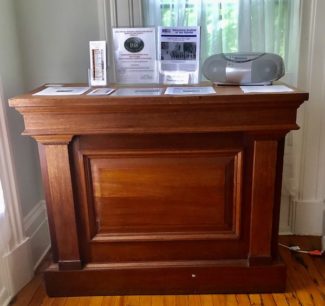 Registration Desk St. George Hotel. Courtesy of the Historical Society of the Nyacks.

The hotel had an oak registration desk that has been preserved and is on view at the museum of the Historical Society of the Nyacks. It once had a bell to ring for help. Two registration books, one from September 13, 1902 to March 3, 1904, and one from September 13, 1905 to February 16, 1907, have been preserved. Each registration page is interleaved with ads for local Nyack businesses. All guests, whether staying the night or just dining, signed the register.

There was a column after the room number to record the number of horses stabled. Only two horses were shown in these years. On October 1, 1903 the first automobile was registered and from then on the register shows a few arriving people by automobile, some of whom noted their chauffeur as dining there as well. Guests traveled from all over NY, NJ, and neighboring states, and some from as far away as Paris, Salt Lake City, and St. Petersburg. The register shows few from Nyack dining at the hotel. Either it was thought unnecessary for them to register, or the restaurant was too expensive for the local market. 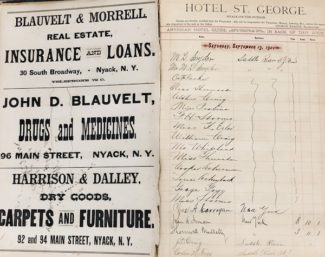 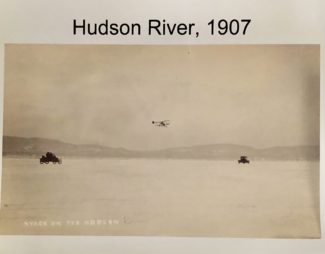 1907 photo of two cars crossing the Hudson River. Note the biplane crossing too.

Groups and clubs like the Apollo Glee and Minstrel Club of Boston would stay the night. Other groups, many traveling by yacht, would stop for dinner. A group that included Bill Bailey, who signed as being connected with the Barnum & Bailey Circus, also included Anthony Comstock who signed as the “Preserver of the Public Morals.” On New Year’s Day 1907, several members of the Guggenheim family had dinner. By February 2007, Nyack was in the middle of deep winter. 93 people in a sleigh ride party from Haverstraw dined at the St. George. On February 23, five people from NYC arrived in a Packard car having crossed from Tarrytown on the frozen river. A note was appended that they were the first to cross that year.

In November 1891, Thomas Nast, famed cartoonist and caricaturist, came to Nyack with a group aboard Thomas McIntyre’s steamboat, Strae. The group dined at the St. George. When Nast signed the register he added several pen sketches of the steamboat, the captain, and a champagne bottle with the cork flying out. 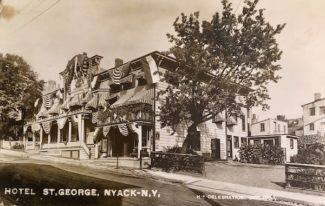 St. George decked out for the Hudson-Fulton Anniversary Celebration in 1909.

The building was not known for great ventilation. Bardin installed an electric fan in the summer of 1891. It was 10 inches in diameter and ran on a battery that was good for 8 hours. Nyack was electrified in 1887, one presumes the St. George had gas lighting for much of its first few years. Ironically, Helen Bardin, George’s wife, was injured by a fan that flew out of its socket while dining in NYC in May of 1895. One year later she was still suffering from pains to her head and won a lawsuit of $750 through her Nyack attorney, Arthur Tompkins, later to be a New York State Supreme Court Justice.

Even as late as the 1940s, the restaurant had huge fans that were run by heavy weights along the wall. They had to regularly pulled up like old clocks. “Very impressive,” said one villager who remembers taking her boyfriend there.

Very impressive is the apt description for the St. George Hotel that burst onto the scene in 1885, soon to become the heartbeat of the village with a restaurant that people traveled from afar to visit.