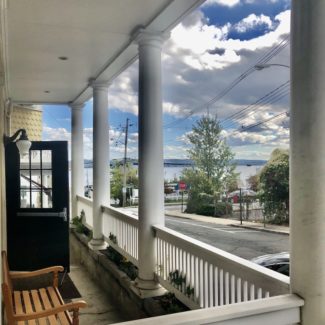 The front porch of the St. George today still has a great view of the Hudson River.

If you wanted to know what was going on in Nyack, the St. George Hotel was once the place to be. Established in 1885 when Nyack was a go-to summer resort for wealthy city dwellers, the hotel featured the finest meals in Nyack by a French-speaking proprietor, George Bardin. Located on Burd St. not far from the Nyack Ferry, the St. George was a favorite way station for travelers heading up state and for day trippers from NYC. The restaurant became the meeting place for innumerable civic events and banquets into the 1960s long after the hotel rooms had seen their better day. Renovated in the 1980s, the hotel became the home of 10 antiques shops during the period when Nyack was the antique capitol of the Hudson River Valley. In 2004, another renovation to create offices and retail space earned a Historic Preservation Merit Award. 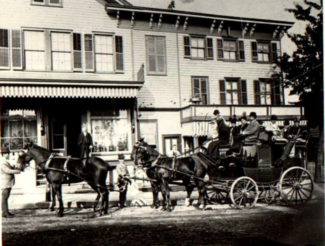 A Tally-Ho coach at the St. George in the 1890s. Is it George Bardin standing at the restaurant door?

In addition to being prodigious eaters, many Gilded Age citizens were prodigious walkers, averaging well over the 10,000 steps recommended today. In September 1899, three men accepted a challenge to walk from NYC to Nyack and back. It took 12 hours to walk to Nyack and they stayed the night at the St. George Hotel. In like manner, eleven members of the NYC Fresh Air Club took the West Shore Railroad to Haverstraw in November of 1890. From there they walked over the mountains to Nyack where they had a big dinner at the St. George Hotel. They then walked to Tappan where they took a train to the city.

Then as now, cyclists would bike from the city to Nyack. The Montauk Wheelmen of Brooklyn biked to Nyack on the west side of the Hudson on a Sunday in late September 1892, ate lunch at the St. George, then biked back to the city crossing to the east side of the river on the Nyack Ferry. John D. Rockefeller, Jr. with his friends, would take the ferry to Nyack, bike along River Road and then lunch at the St. George.

Tally-Ho coach trips from NYC to Tuxedo with a stop in Nyack were also a popular pastime. A trip in 1892 managed by Pierre Lorillard Jr.’s travel company held its first trip in 1892. The coach started at the Plaza Hotel, in NYC, arrived in Tarrytown for the 12:30 ferry, and then dined at the St. George, leaving for Tuxedo at 2:30. Eight horse relays were set up in Yonkers, Dobbs Ferry, Nyack, Spring Valley, and Suffern. The trip was reversed the next day with lunch again at the St. George. Overall, the 52-mile trip took 7 hours including the stop sfor lunch.

The Case of a Stolen Raincoat 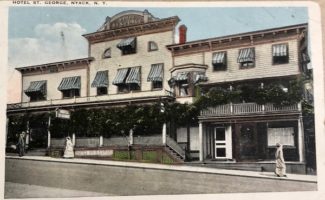 Postcard showing stole’s in front of the St. George.

In 1892, a young gentleman stopped at Moeller’s drugstore at the corner of Main and Broadway asking where he might be able to write a letter. He was directed to the St. George. Hotel where he was given a desk, pen, and paper to write his letter. Later, a party of four diners upon leaving noticed that one overcoat was missing, and an old hat was exchanged for a new one.  Proprietor Bardin thought the coat might have been taken by another guest.

The next day, Bardin related the story to villager, Mr. Simonson. Simonson stopped at the post office after leaving the St. George. He picked up a letter for his servant and he noticed that the envelope had the mark of the St. George Hotel. When questioned, his servant said a young gentleman who wrote the letter had visited her the previous day. She identified the exchanged hat being one that Howard Dann wore when he visited her. An officer went to NYC to seek him only to discover Dann had already taken the midnight train to Buffalo.  How did it all end? We don’t know if the overcoat thief was ever brought to justice in Nyack.

In 1893, a team and carriage were summoned from Iserman & Sand’s stable in S. Nyack to take a party home late in the evening. After waiting for some time in front of the hotel, the driver got out and went to the hotel door to ask about the people. While he was there the team ran away dashing down Piermont Avenue and crashing the carriage into a tree at the corner with Clinton Ave. It was the second runaway of the day. Oscar Luelich a baker on Main St., had his horse and wagon break from a post on Main St. The horse ran down Main, turned right onto Broadway tipping pies and cakes in front of the Reformed Church. Trailing the lower part of the wagon the horse raced down Broadway until it overturned another baker’s wagon on S. Broadway. 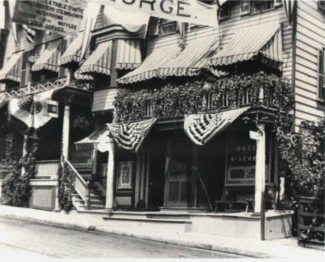 St. George around the turn of the century. Since the St. George faced south, awnings were need to aide the windows. Ivy is growing along the second floor railing. The second floor rooms were not far from the street.

Just after Christmas 1895, Mrs. James W. Clark of a wealthy NYC family and brother of a millionaire cracker manufacturer, became unhinged in Nyack. She had been operated on in the city and came to Nyack for recovery staying with a friend of the family, Dr. D. L. Defendorf, of Upper Nyack. During her stay, Mrs. Clark became increasingly overwrought and left the house at 3a.

She arrived at the St. George and rang the bell. She registered as Mrs. W.W. Brown of Newark and George Bardin gave her room #7 on the second floor. She came down for breakfast the next morning. Later the housekeeper found newspaper stuffed in the keyhole and under the door. Bardin investigated to see if he could smell gas in case of a suicide. Assured that was not the case,  he returned to his duties. Hours later, he learned that she had her window open and was blowing kisses and talking to strangers on the street. Bardin went to the room and told her such behavior was unacceptable.

At 3:30p she checked out of the St. George. On Broadway she met two guests of Defendorf’s who were looking for her. They convinced her to come back to Upper Nyack, but while going there, she broke free and ran onto the grounds of the Nyack Country Club, then ran house to house. She was finally apprehended by two deputized villagers. When she pulled what was thought to be a pocketknife in front of the judge, she was restrained. Justice Bombard went to the Defendorf’s to see if they would take her back. They would not. Bombard committed her to jail at Village Hall. Her husband was telegraphed, and he was expected the next day. After appearing as a page one news story, we are left to puzzle whether Mrs. Clark ever found peace of mind.

Jim Crow at the St. George 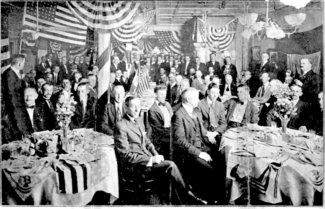 Banquet for WWA veterans from the Mazeppa Fire Company circa 1920. Notice that is an all male all white group. Curtesy of the Nyack Library.

Before venturing any further, it is important to know that the St. George restaurant like other Nyack’s restaurants of the time was segregated. Leonard Cooke, a former chairman of the Rockland County Human Rights Association, noted that hardly any of the restaurants would serve black people. He said, “the only time you could go into the St. George Hotel was to celebrate political victories, not to eat there.” 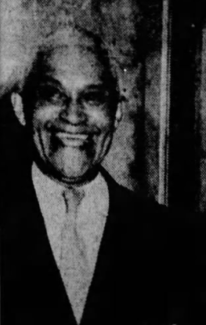 Yet the busboys, waiters, bellmen, and maids were usually black. William Williams, a longtime African American resident of Burd St, a WWI vet, and a Nyack mail carrier, first worked at the St. George following in the footsteps of his father.  His first job was to stand in front of the hotel and use a whisk broom to brush off the ladies and gentlemen as they got out of open cars even if they were wearing dusters. Mr. Williams remembered that on Sundays there would be a line as far back as the door waiting to get into the St. George. Williams became a bus boy, a waiter, and bell boy over time.

He knew George Barden and the second owner Felix Flieger with whom he practiced German; a language Williams was learning in high school. By time the St. George was owned by Fred Siemer, Williams was working part-time as a mail carrier. Often during the lunch hour, he would play music at the St. George, and then go back to mail carrying. He played piano, saxophone, and clarinet and was a regular performer with his five-piece orchestra, the Utopians.

Still, much to our discredit, William Williams, along with other black people, would not have been able to dine at the St. George without an invitation.

Illustrations: Postcards from the Robert Courtwright Collection, Historical Society of the Nyacks, current photos by the author.