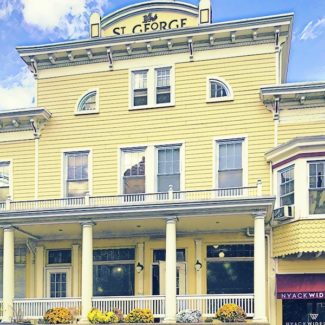 If you wanted to know what was going on in Nyack, the St. George Hotel was once the place to be. Established in 1885 when Nyack was a go-to summer resort for wealthy city dwellers, the hotel featured the finest meals in Nyack by a French-speaking proprietor, George Bardin. Located on Burd St. not far from the Nyack Ferry, the St. George was a favorite way station for travelers heading up state and for day trippers from NYC. The restaurant became the meeting place for innumerable civic events and banquets into the 1960s long after the hotel rooms had seen their better day. Renovated in the 1980s, the hotel became the home of 10 antiques shops during the period when Nyack was the antique capitol of the Hudson River Valley. In 2004, another renovation to create offices and retail space earned a Historic Preservation Merit Award. 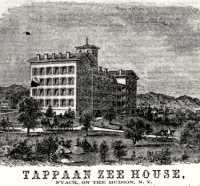 Tappan Zee House on the Hudson River at the door of Mansfield Ave. was also the Rockland Female Insitute during the school year.

It was far easier to find a room in 19th century Nyack than it is today. The St. George Hotel met an unfilled niche among the seven hotels in Nyack at the time it opened. Three large summer resorts for wealthy city dwellers filled the high end of the market. The Tappan Zee House on the river in S. Nyack, the Prospect House on S. Mountain in S. Nyack, and the Pavilion off Main Street at the end of Catherine St. were much larger than the St. George. The Prospect House, for example, had at least 150 rooms and a dining room for 225.

Four downtown hotels focused on transient travelers arriving by ferry, steamboat, or train. Two were near the waterfront, the Smithsonian, which Bardin once managed, and the aging York house on lower Main. Around the corner from the St. George was the Rockland County Hotel and at Broadway and High where Nyack Village Hall is now located was the Broadway Hotel. Near the Nyack train station was the Franklin House at Franklin and DePew. The Franklin House was connected to a large meeting hall, the Opera House.  All served food but only one gained immediate regional recognition for its service and for the meticulous service of its host and for its fine dining, the St. George. The restaurant was to be the St. George’s main draw for the next 70 years. 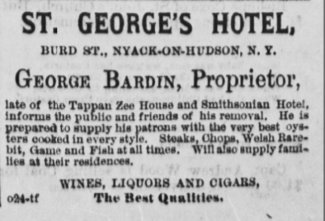 The hotel is called St. George’s Hotel in this early ad that touts Bardin’s prior hotel positions.

George Bardin was the master hotelier known for fine dining at the Tappan Zee House and the Smithsonian prior to opening the St. George in 1885. Bardin was born in Belgium. He came to America in 1868, worked as a caterer for the Erie Railroad office on 23rd St. in NYC, maintained a residence nearby for railroad executives, and catered for a large boarding house at 81 5th Ave. He opened the Sherwood House on 5th and 44th and in the summer of 1875 took over management of the Tappan Zee House in S. Nyack, which served as the Rockland Female Institute during the school year. He also managed the Smithsonian Hotel on Burd St. close to the ferry terminal 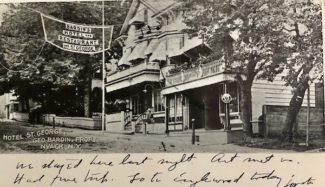 Postcard from around 1900 before an addition was made to the restaurant. Is the person standing in the center George Bardin?

In 1885, he opened the St. George Hotel , which soon became a favorite stopping place between New York and Tuxedo. Bardin’s meals were famous, and many came for the meals alone. Advertisements touted oysters cooked in every style, steaks, chops, Welsh rarebit, game, and fish complete with wine, liquors, and cigars.

Bardin was an excellent host. He was invited as a special guest to sit across from President Grover Cleveland during a summer clambake at a competing hotel, the Prospect House. He hosted members of the Gould and Vanderbilt families and President Benjamin Harrison. He was known for his high spirits. He once broadcast live music from the restaurant to the village by telephone, having told the telephone operator to dial all Nyack numbers.

Bardin died in 1909 after a brief illness. His son George, Jr., daughter Tillie, and wife, Helen, equally divided the property. George Jr. who was manager of the New City Hotel, took over management of the St. George until it was sold to Felix Fieger. Tragically, George Jr. committed suicide in 1910 leaving a wife and two children.

Dining at the St. George 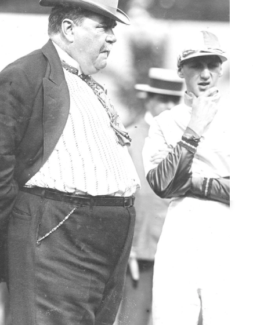 Diamond Jim Brady at the Saratoga Races in 1907.

Gilded Age diners were robust eaters. Prosperous men were expected to be overweight as a sign of their success. Women were encouraged to have bountiful figures. Heavy eaters like Diamond Jim Brady would consume huge amounts of oysters, soup, and crabs followed by duck, steak, lobster, fish, and dessert. Presidents Cleveland and Harrison were typical over-eaters of their times.

It’s no wonder that Bardin was ready for a Presidential dinner. 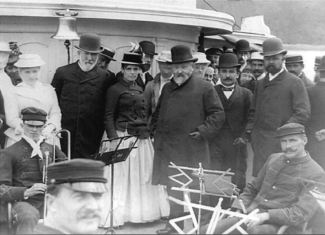 President Harrison aboard a yacht. Perhaps the woman next to him is his future wife?

On July 28, 1894, Benjamin Harrison, who had been out of office one year, headed upriver to the St. George for dinner. Arriving on the yacht Vamoose, Harrison was accompanied by, among others, his grandson, and the niece of his first wife, Mary Scott Dimmick, who was 25 years younger and in two years was to become his second wife.  Harrison telegraphed Bardin in advance suggesting that the party of six didn’t want any publicity. Still, when he arrived at 7p and walked up the center of Burd St. to the hotel, the short, sandy-haired ex-president was trailed by many onlookers. When word of his arrival spread in the village, a constant parade walked past the hotel and peered in the windows hoping for a view.

The French menu Bardin prepared was prodigious. Starting with little-neck clams, anchovy toast, salted almonds, and celery, the second course was turtle soup and a timbale of ox tongue accompanied by Amontillado sherry.  The fish course was halibut in a black truffle sauce with potatoes duchesse (roasted piped mashed potatoes), accompanied by sauternes. The main courses consisted of sweetbreads, roasted filets with braised carrots and onions, and English peas. This was followed by poulet de Grain au Cresson (chicken en papilotte with watercress) Chateau Lafite and Chateau Pontet Canet wines from Bordeaux accompanied the mains. After salad, dessert consisted of a pineapple cake soaked in a wine sauce with whipped cream accompanied by Perrier Jouet, fruit, coffee, and cigars. One wonders how all that could have been eaten by 9p when the party left, the moon rising over the Hudson River. 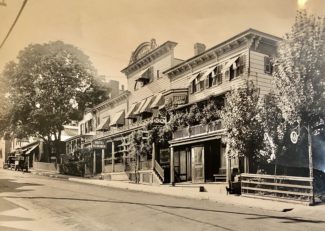 St. George circa 2015. The hotel door is wide open. A Ford dealership in a building that still stands is on the far left. A building stands close to the left side of the St. George that would soon be removed.

Nyack today might rightly be called restaurant town for its diverse selection of menus served in historic buildings. One might argue that this is the legacy of the restaurant at the St. George Hotel that attracted not only villagers but people from afar.

Illustrations: Postcards from the Robert Courtwright Collection, Historical Society of the Nyacks, current photos by the author.