Rockland Center for the Arts (RoCA) is proud to present The Enchanted Garden: Colors in Motion and the Women in Sculpture exhibits as a part of a tribute to the 20th Century artist and feminist, Dorothy Gillespie. The exhibits, which open today (Fri, Oct 15, 2021) in The Catherine Konner Sculpture Park, include works by Dorothy M. Gillespie, Leigh Taylor Mickelson, Aurora Robson, Simone Kestelman and Cathrin Hoskinson. 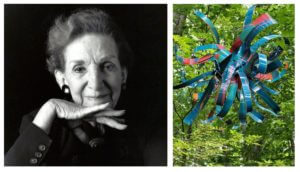 Gillespie (1920-2012) was born in Roanoke, VA and lived in Nyack during the later years of her life. She pioneered joyful, new directions of metal sculpture and is best known for large-scale, colorfully painted arrangements of cut aluminum strips curling, radiating, or undulating in giant arrangements of ribbons, enchanted towers, or bursting fireworks. She was well known as a painter, sculptor and installation artist whose work incorporated many significant 20th-century trends in art.

During Dorothy Gillespie’s youth … “girls did not attend art school, at least not ‘nice’ girls,” said Gillespie in 2010. Nevertheless, she was determined to be an artist and attended the Maryland Institute College in Baltimore. She was more fortunate than women sculptors in the 19th Century who were mostly hired as studio assistants by established male sculptors with few exhibitions. Harriet Hosmer, Emma Stebbins, Edmonia Lewis, Frances Grimes and Helen Mears were some of the few who made names in the arts as women during that time. They did not pursue monumental work as frequently as men did and mostly produced works in bronze and consistent middle-class demand for small-scale sculpture to decorate the home and garden. Today many more women are now entering traditional male dominated sculpture roles in metal, wood and stone, thanks to the pioneering activism of women like Dorothy Gillespie in the 20th century.

An influential force in the women’s movement, Gillespie encouraged more women’s art in museums and art in public spaces. In 1970, Gillespie joined Women in the Arts and created picket signs protesting at the Whitney Museum demanding that the curators choose more women artists for their “Annual exhibition. The demonstration worked, and more women artists were chosen for the show. Although the increase was very slow, over time it increased from 8 percent to 40 percent. Gillespie was the Founder of the Women Artists Historical Archives of the Women’s Interart Center in NY, NY, filming and taping interviews of some of the most important women artists of the 20th century as well as presenting her own radio show. Gillespie along with Joyce Weinstein founded a group called the NY Professional Women Artists. The 14 members lectures at Universities and wrote articles to encourage other women artists.

The Enchanted Garden: Colors in Motion exhibit at RoCA features Dorothy Gillespie’s joyful and brilliantly colored starbursts glimmer hanging from the trees as well as lining the pathway. The pieces create an enchanted garden of colors in motion. Though stationary they seem to possess a kinetic quality. Two larger pieces can be seen at the entry to RoCA.

Leigh Taylor Mickelson’s ceramic botanical Garden Dwellers sculptures uniquely mimic the range of organisms from their microscopic to the multicellular; however, they also reflect what is recognizably “human”:  the different components of self, sexuality and family, and how these components relate and conflict with one another. By using natural forms – especially ones found in plant life – she uses her work to “magnify” the elements of this dichotomy: natural forms playing out the spiritual, emotional and physical dramas that exist within our human selves. Her most recent work gives homage to one of her most recent inspirations: a plant’s will to pollinate. For Mickelson, the private “business” of flowering plants mimics human courtship and companionship, seduction and sexuality, to a fascinating degree. It also brings to mind the Garden of Eden story, with its legendary beauty but nascent eroticism. Plant life, once magnified, divulges a beauty and familiarity that is regrettably unseen by the naked eye. Mickelson’s work aims to capture the essence and beauty of these organic forms, revealing our shared will to seduce and reproduce.

Aurora Robson created a 12 ft x 8 ft x 7 ft high sculpture of plastics. (We think of plastic as “disposable” when it is precisely the opposite.) Robson raises awareness of our enormous plastic waste problem and the detrimental effects on our planet. This moment in time is considered to be the “Plastic Apocalypse” according to the June 2018 issue of National Geographic magazine. We propose that it is time to focus on our plastic footprints and how to reduce them as a species. These sculptural works were made from cleaned, cut, and welded plastic barrels taken from the waste stream.

Aurora Robson is best known for her large, lively and intricate installations of plastic. She has developed a teaching course to encourage a shift of paradigms in art and science education while helping restrict the flow of plastic debris to our oceans. She uses her art to inspire others to rethink and reinvent plastic waste in ways that promote creative strategies to upcycle discarded plastics into new objects. Robson is an eco-activist and founder of Project Vortex, an international organization of artists, architects and designers working together to reduce the amount of plastic debris littering our oceans and shorelines. A few of the major collections her work can be found include: The Figge Art Museum, IA; Kingsbrae Gardens, NB, Canada; The South Carolina Aquarium, SC; and the Poipu Beach Hotel, HI. 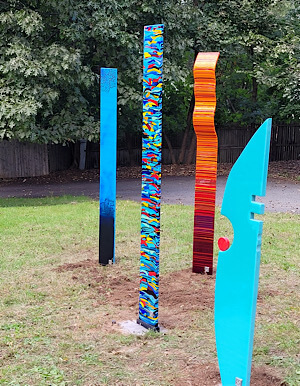 Simone Kestelman’s glass Warriors sculptures represent different types of inner strength, together they show that individuals are strongest when they accept their vulnerability and stand strong in spite of it. Glass sculptures may appear fragile but are resistant to heat, cold, pressure and chemicals. They can endure heavy rains, snowstorms and heat waves. In stressful times, if we stand still, we realize how strong we are to overcome adversity. The stripes in her pieces represent the DNA that makes us each unique. These sculptures express the diversity of both individuality and personality.

Kestelman’s work reflects on important social issues and comments on them through her work, focusing on injustice, inequality and abuse by stepping beyond traditional imagery and sculpture. Her intention is to drive more people to think and act to promote the protection of women and children in vulnerable situations. She was the Director of SK Gallery in White Plains, NY and has exhibited at the Museum of Art, Morago, CA, the Tucson Contemporary Womens Art Collective, the United Nations, MOCA in Calgary, Canada and A Hebraica Gallery, Novotel Sao Paulo, Brazil.

Cathrin Hoskinson’s large metal Connection sculptures are drawings of natural forms, poetic images which bring to mind memories, yearnings, and beauty – an essence of what makes us human. By following different types of patterns, she presents a connection between the inner structures of the body and the outer lines in nature. Her works remind the viewer of our place in the world as part of the fabric of being. Hoskinson’s Silver Night sculpture suggests a forest at night in which dancing trees have been lit by a column of light from the moon. Four interlocking planes of mirror-finished stainless steel suggest an abstraction of moving figures, holding up a circular form, made of sequins flickering in the wind.

Hoskinson’s sculptures have been installed across the country, including: New York, Illinois, Florida, California, Virginia, Maryland and North & South Carolina. Born in Montreal, she has been living in New York since 1974, obtaining her MFA from Hunter College. Hoskinson worked at Argos Foundry in Brewster, NY.

The Catherine Konner Sculpture Park is open from dawn to dusk and is free to the public. Brochures can be picked up at the registration desk. For more information visit: www.rocklandartcenter.org or call 845-358-0877. The exhibits will remain on display through October 2023.

Rockland Center for the Arts is the oldest and largest arts organization in Rockland County, presenting outstanding programming in the arts for over 70 years. RoCA is located at 27 S Greenbush Rd, West Nyack.