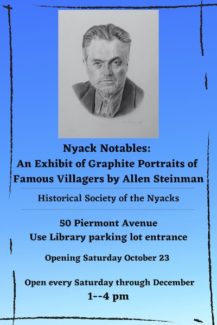 Allen Steinman, long-time Nyack resident, makes us forget that we live in an age where nearly everyone has a digital camera in their pocket with editing features only a tap away. Steinman’s true-to-life pencil portraits capture not only what a camera sees but the indefinable­­–expression, character, and personality. “Nyack Notables,” an exhibit of Steinman’s drawings of Nyack’s most noted denizens, is on display at the Historical Society of the Nyacks museum at 50 Piermont Ave. beginning October 23 and continuing every Saturday through the end of the year from 1-4p.

Who or What is a “Nyack Notable”?

Among the 20 portraits on display, 12 are hung on the museum walls. The portraits cover a period of 100 years and include 3 Oscar winners, a Nobel prize winner, and multiple Pulitzer winners. Some notables might be easily identified with Nyack such as Helen Hayes and Edward Hopper, but some portraits will be more surprising: She lived in Nyack?

Linda Steinman came up with the idea for “Nyack Notables” after Allen did a portrait of Edward Hopper. “Why not Helen Hayes?” she said. “Why not a series?” The idea appealed to Steinman as a way of giving back to others his love of history and Nyack. He found many people he had no idea that they once lived in Nyack. 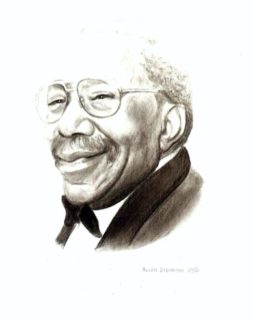 Steinman’s “Nyack Notables” portrait of Hezekiah Easter who was a Nyack Trustee and political activist.

Steinman is a self-taught artist. He didn’t attend art school. Rather, he learned the ins and outs of faces by working as a photo retoucher.  His father, Nathan Steinman, was a skilled retoucher at Paulette Studio in Brooklyn. He taught the art to Allen. The studio made official large-scale portraits of judges, doctors, and politicians to hang on their office walls. A major part of their business at the time was taking yearbook photos and selling sets of 3-8×10 and wallet size photos to students. All studio portraits of the time were heavily retouched to improve the harsh reality of the camera image so people could look their very best–that’s what they paid for.

There were thousands of photos that needed work. Unknown to many students, their faces were retouched. Some had their eyes partially closed and they had to be opened, some had bad acne, some had bags under their eyes, some had weird smiles. As a high school student working for extra money, Steinman developed the skill to retouch these photos. It was an old-style process. He worked on celluloid negatives taken by a large format camera. The negative was held on an angled retouching stand with a light shining from underneath to illuminate the work surface. Pencils and etching tools were used to retouch the photo to fix what nature didn’t. Steinman continued to retouch photos for the studio while he attended Brooklyn College but then set it aside during his professional career. 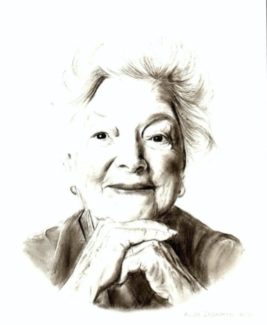 While he worked on photo negatives, Steinman always thought of the face as a positive. The training to reverse the process provided him the skill to imagine the final positive image. Working with a pencil and etching knife provide him the training to draw after he retired from a career as an orthodontist.

Steinman was part of an orthognathic surgery team at Nyack Hospital and Mount Sinai that corrected irregularities of the jaw. As part of the process, he would take a profile photo and then make mock drawings of how a person would look after surgery. Little did he know at the time that his orthognathic skills along with his retouching skills would lead to a new endeavor after he retired. 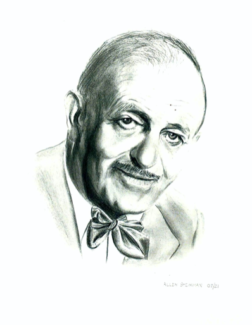 Steinman’s Notable Nyack portrait of Ben Hecht, two time Academy Award winner for his screenplays. Noted for screenplay of films ranging from Gone With the Wind to Casino Royale.

Steinman started drawing pencil portraits of his grandchildren and then relatives. But Steinman is not a person to do anything halfway. He liked the challenge of drawing ever more difficult portraits. Since childhood, he had been intrigued by portraits at the Metropolitan Museum of Art (Met). For a time, he went to the Met to draw portraits done by the Old Masters, Rembrandt, Ruebens, and Van Dyke. He was so far removed from the art world that he didn’t know he needed a permit to draw in the Met. Pencil sketching is only permitted for students but otherwise a permit is required and those are given to serious artists. A guard let him complete his drawing and Met administrators thought the drawing was good enough so that he got a permit. He ended up not using the permit. Mostly he works at home from photographs.

Steinman said drawing the works of the Old Masters was a challenge not unlike doing a crossword puzzle, always wondering if he could finish it. He already had a deep interest in art and portraiture and working from the Old Masters gave him a deeper appreciation of artists like Rembrandt. His favorite drawing is one he made of a cleric in a Rembrandt portrait. The intricacies of drawing the ruff were far more challenging and took much longer than drawing the face.

‘You Got to Be Crazy to Do Portraits’ 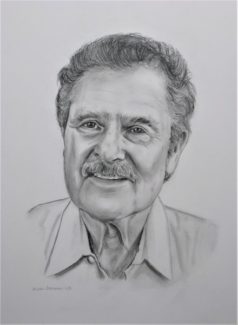 Steinman self-portrait (not shown in the “Nyack Notables” exhibit).

While at an art colony in the Bahamas, a known artist told him, “You got to be crazy to do portraits, people have such a funny feeling about how they look and how people see them.” While that’s true, Steinman doesn’t sell his work, so he is free to seek the ‘truth’ in a portrait. He has prepared portraits for a charity and more than once has participated in a charitable auction where he would provide a portrait for the highest bidder.

Each portrait takes approximately 8-10 hours. He doesn’t do all the work at once but spreads it over several days. In the process he feels like he gets to know the person. Some are very interactive to him. He likes to draw with the person staring straight at the viewer with expressive eyes. He likes to include hands where possible because hands are also so expressive. The exhibit portraits of Helen Hayes, Toni Morison, Carson McCullers, and Edward Hopper include hands.

Steinman is happy to show you that his work is not always portraits, he does creative and imaginative works and tronies, a Dutch term referring to an imaginary person in costume in often with an exaggerated expression in Dutch Baroque painting like the woman in Vermeer’s Girl with a Pearl Earring.

Like observing the Old Masters, spending time with Steinman’s “Nyack Notables” at the Historical Society of the Nyacks’ exhibit will yield new insights and depth to our idea of those from Nyack who achieved the heights of their artistic and political careers. Along the way you may find yourself exclaiming, “She (or he) was from Nyack?” It is an exhibit you don’t want to miss.

Nyack People & Places, a weekly series that features photos and profiles of citizens and scenes near Nyack, NY, is brought to you by Sun River Health, and Weld Realty.
In this article:Allen Steinman, Carfson McCullers, edward hopper, helen hayes, Historical Society of The Nyacks, Jonathan Demme