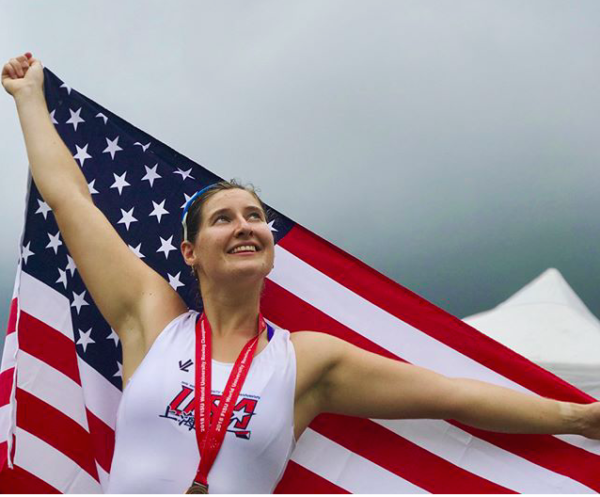 Two Rockland County residents, Olympic Rower Charlotte Buck and educator, organizer, and writer J. Faith Almiron aka. Kapwa, will each host a night of discussions with local filmmakers through Rivertown Film Society’s month-long celebration of locally made films and filmmakers, Rockland in Motion. The annual event offers an opportunity to see work from a wide range of filmmakers who live and work in the community and contribute to local culture. The program will stream on Rivertown Film Society’s website through October 3rd.

The 2 part line-up includes veteran filmmakers alongside early career filmmakers working in music video, drama, comedy, dance, and documentary. Each film is preceded by a special introduction by the filmmaker on their artistic inspiration and Rockland County connection.

On September 22nd at 7p, the first half of the 18 featured filmmakers will join together for a virtual discussion on their work with Charlotte Buck. Buck competed in the women’s eight race. She trained with the Rockland Rowing Association, then joined the Columbia University team as a walk-on, eventually becoming team captain. Along with her achievements at this year’s Olympic games, Buck won a bronze medal with the American University Rowing team in Beijing.

On Wednesday, September 29th, at 7p, J. Faith Almiron aka. Kapwa will hold a virtual discussion with the second half of the filmmakers. Kapwa’s critical essays have appeared in LA Review of Books, Hyperallergic, LitHub, and galleries and museums, including the Guggenheim, Museum of Fine Arts Boston, and Queensland Gallery of Modern Art. Her forthcoming manuscript Untitled (Basquiat) offers a groundbreaking portrait of Jean-Michel Basquiat. She has taught critical race and ethnic studies at Rutgers University-New Brunswick, the Institute for Research in African-American Studies at Columbia University, and the University of Wisconsin at Madison. Kapwa is also a founding member of the emergent Filipinx Solidarity Collective of Rockland.

Registration for the discussions and more information on the filmmakers is available on Rivertown Film Society’s website. While the event is free and open to the public, donations are encouraged.