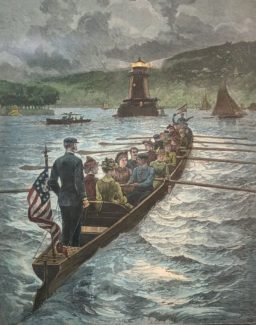 The perfect antidote to New York’s hot, steamy summer evenings before air conditioning ––an evening barge party on the Hudson River. The Nyack Rowing Association (N.R.A.) was one of the many rowing clubs formed during the halcyon days of the sport of rowing during the Gilded Age. The leading men of Nyack formed the club in 1880 and then proceeded to fund and build a magnificent clubhouse on a dock at the foot of Spear Street. The Victorian structure was one of the most visible features of Nyack as people approached the village by boat.

While the club held races and frequent social gatherings, one popular activity was taking the club’s large barge out for summer evening rows. One cruise is immortalized in Julian O. Davidson’s, A Barge Party on the Tappan Zee, published in an 1887 issue of Harper’s Weekly. Davidson wrote, “these rowing parties are a keen delight to the lady friends of the members of the association.”  News about barge parties crewed by the N.R.A. appeared in the Rockland County Journal regularly during those hot and still summer nights of the Gilded Age. 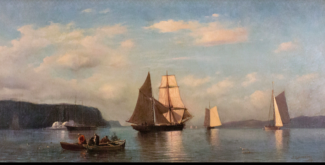 Davidson painting, The Hudson from the Tappan Zee.

Julian Oliver Davidson (1853-1894), a well-known marine painter who fell in love with his adopted home, Nyack-on-Hudson, was one of the founders of the N.R.A. He married and built a summer house that still stands at 117 S. Broadway. The house, built on a slope, sports an unusual bridge to the front door and has magnificent views of the Hudson River from its upper floors. A dedicated rower, Davidson at one time owned a small, low-hung steamboat called the Princess from which he made river-level sketches, a unique perspective that characterizes many of his marine paintings. His dramatic painting, The Hudson from the Tappan Zee, depicts steamboats, rowboats, and sailing ships in front of Hook Mountain. The painting hangs in the Hudson River Museum in Yonkers. 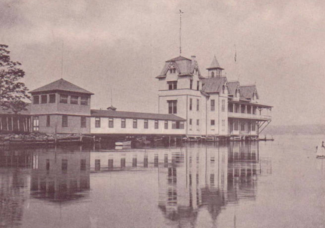 The Nyack Rowing Association boat house seen from the shore. The long low building is the bowling alley. Courtesy of the Nyack Library

The club raised $8,000 to build a three-story Victorian club house on piers. The new building is proudly shown in Davidson’s 1882 engraving, the New Boathouse of the Nyack Rowing Association published in Harper’s Weekly. Flags and banners are flying in the wind. Crowds lined the second-floor balcony that wrapped around three sides of the building. Davidson’s steamboat, the Princess, can be seen on the lower left along with a four-member scull and small sailboats. 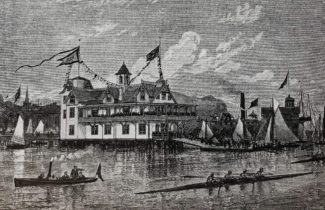 The building was a real man-cave, perfect for a men’s-only club. Wives and girlfriends were allowed in on Tuesdays only beginning at 10:00a and for weekend social occasions. The first floor of the building housed boats and oars, the second contained a ballroom with electricity for social events, the third floor held dressing rooms, and the fourth-floor tower room on the north corner contained a prized billiard table. At some point a single-floor building was added on the dock behind to house a bowling alley.

What do young men on a summer afternoon do when they’re planning to watch a baseball game? On an impulse, ten members of the N.R.A. decided they would row roughly ten miles to Yonkers to see a game between the Haverstraw and Yonkers baseball teams. Taking much longer than expected, they arrived at Yonkers dock at 5:20p, much too late to see the game.

But there was a saving grace: The local rowing club, the Palisades, invited the men to put their boat up at their nearby boat house, and the men enjoyed dinner at the Getty House, a downtown Yonkers hotel and restaurant. Eventually, the night led them to the parlor for singing, and they were accompanied on piano by Julian Davidson. After more singing at the Palisades boathouse, the men rowed back to Nyack, arriving at 12:30a.

In mid-summer 1891, a coed party made up of members of the N.R.A. and members of the newly formed Nyack Country Club made a moonlit row to Hook Mountain starting at 8p from the N.R.A. clubhouse. On the way back from Hook Mt., the boat stopped at the Nyack Country Club, a three-story brick house built as a summer home built around 1840 by a retired NYC attorney, Hugh Maxwell. The Upper Nyack Elementary School replaced the aging building in the 1950s. Refreshments and dancing ensued at the country club before the group rowed back to the N.R.A. clubhouse around midnight.

A Night Row to a Stupendous Victorian Home

An etching of the Dessar mansion in S. Nyack.

Judge Leo C. Dessar owned one of the most fabulous Victorian summer homes in all the Nyacks. The house, located in South Nyack, was built with brownstone quarried on the property, and it sported a four-story turret with an observatory balcony on the top. Dresser invited the N.R.A. for a dinner on Friday, July 23, 1892. It was not a long-distance row from the clubhouse to South Nyack but the 12 club members had a hard pull in extremely rough waters.

George Bardin, owner of the St. George Hotel, joined Dresser and the club members for a house tour, dinner, and singing. At some point, toasts were made to the “absent ladies.” The party broke up late, and club members rowed home.

Barge Party on the Tappan Zee by Moonlight 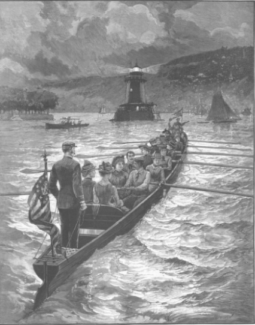 The Barge Party etching as printed in Harper’s Weekly.

Davidson’s 1887 etching in Harper’s Weekly is a romantic yet realistic view of a moonlit barge party. Twenty-four formally dressed men and women crowd the small ten-oared barge. They are approaching Tarrytown Light, also called Kingsland Island Light, which was built ½ mile offshore near shoals. Land reclaimed for the Tarrytown General Motors factory made the 1883 lighthouse obsolete. In Davison’s etching, Kings Island can be seen to the left of the light.

A moon hidden behind clouds illuminates a calm river. People are conversing. One woman dips her hand into the cool water. Sailboats dot the near shore. A small steamer, similar to Davidson’s Princess, or perhaps another small barge is shown heading around Kings Island. The erect and watchful coxswain, wearing the approved N.R.A. uniform and cap, steers the barge to the right of the light toward the Westchester hills. Behind him, a marine flag flutters, balanced by the just visible N.R.A flag in the front of the boat. After their return to Nyack-on-Hudson, dinner and dancing would have followed at the clubhouse. 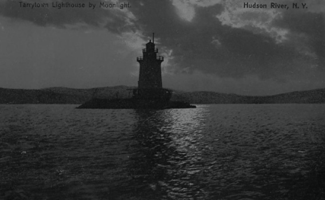 Summer was one long holiday for the leisure class that owned summer homes along the Hudson River in Nyack in the 1890s, of which a moonlit barge party was but one romantic moment. On a calm summer night today, punctuated by the shore and bridge lights, the sounds of the barge party conversations may still be heard whispering to us of a time to which we can no longer return.