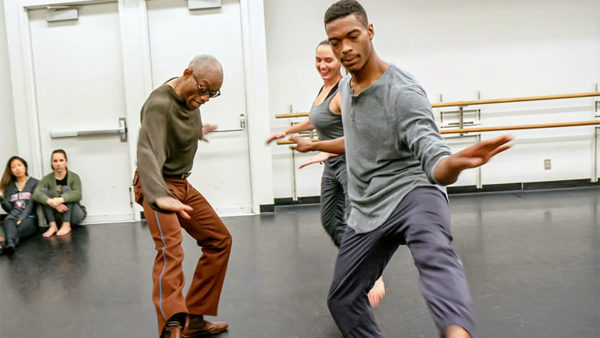 “It goes to the very heart of the vital role art plays in our society during times of social crisis,” says Henry Louis Gates Jr. of the new documentary Can You Bring It: Bill T. Jones and D-Man in the Waters. In 1988, Arnie Zane, Jones’s partner and co-director, died of AIDS-related lymphoma and the future of the company was thrown into question. Facing down immobilizing grief, Rockland County artist Bill T. Jones resolved to keep the company alive. Now, choreographing alone, he turned his attention to the creation of a new dance using movement images of water and wave action.

Rivertown Film Society will screen the film in the garden of the Edward Hopper House Museum & Study Center on July 17th (rain date July 18th) at 8:30 PM EST, joined by Seán Curran, who is known for his performance work with Bill T. Jones/Arnie Zane Dance Company, for which he was honored with a “Bessie” Award for his role in Secret Pastures, and as an original New York City cast member of STOMP! Advanced sales for the film screening are encouraged. Ticket holders may arrive at 8p EST for a Q&A with Curran moderated by Myrna Packer of Packer Bridgman Dance. The live event is a first for the film society since February 2020, just weeks before the pandemic shut down operations.

Bill T. Jones is a multi-talented artist, choreographer, dancer, theater director and writer, and Associate Artist for the 2020 Holland Festival. He has received major honors including the Human Rights Campaign’s 2016 Visibility Award, 2013 National Medal of Arts to a 1994 MacArthur “Genius” Award and Kennedy Center Honors in 2010. Mr. Jones was honored with the 2014 Doris Duke Performing Artist Award, recognized as Officier de l’Ordre des Arts et des Lettres by the French government in 2010, inducted into the American Academy of Arts & Sciences in 2009 and named “An Irreplaceable Dance Treasure” by the Dance Heritage Coalition in 2000. His ventures into Broadway theater resulted in a 2010 Tony Award for Best Choreography in the critically acclaimed FELA! and earned a 2007 Tony Award for Best Choreography in Spring Awakening along with an Obie Award for the show’s 2006 off-Broadway run.

The documentary explores not just Jones’s artistry, but the importance of remembering history and the elders who came before in social movements. In the film, viewers watch as a group of young dancers reconstruct Jones’s dance. As they learn the moves, they deepen their understanding of the power of art in a time of plague and how the Bill T. Jones/Arnie Zane Company was at the forefront of the creative energy spurred by gay liberation in the 1980s just as AIDS began its relentless decimation.

Speaker Seán Curran’s career in the arts spans 30 years, beginning with traditional Irish step dancing as a child in Boston. Curran has had his own dance company for almost 25 years. Their work has been presented by BAM: Next Wave Festival and the Joyce Theater in NYC. Curran also works in opera, directing and choreographing, and is the Chair of NYU’s Tisch School of the Arts Department of Dance. He will speak to the legacy and impact of Bill T. Jones and offer context on the contemporary world of dance for audiences. I spoke with Curran about why the screening comes at a significant time:

Why this film? Why now?

Curran: Watching this film NOW is so important as it reminds us of what a desperate and devastating time it was living through the AIDS pandemic in the 80’s and 90’s but also how art making and doing has a healing transformative ability to help get one through. It is interesting that the film is coming out during the 40th anniversary of the first cases of HIV being reported in what seems so long ago now.

How does art help us to understand this history?

Curran: Art does many jobs for a society or a culture. It holds a mirror up so we see ourselves reflected, tells us stories that we can learn from or identify with, asks big difficult questions. Can You Bring It, it is almost like a Shakespearean history play where we look back at an era or time of intense crisis and see how people coped. In this case, the story is of how a choreographer and his dance company made it through by continuing to dance or to “make and do and work” as we say.

What was that process like to be part of?

Curran: There was such a healing, transformative process in rehearsal that was also there in live performance in addition to a sense of catharsis for audience and performers alike. Art can work in your life like religion does for some folks. It can make sense out of a chaotic universe where bad things happen to good people.

Why is this piece unique for contemporary dance companies?

Curran: In contemporary dance, we do not often tell stories or imitate scenes from life in the way you might see in an opera or a ballet.  But I also have to say: we are human beings dancing with each other and for each other, so it is tough to call what we do in contemporary dance “abstract.” I think it is useful to not necessarily look for a traditional narrative type story but to look for images that resonate and to be open to feel profoundly the emotions that the choreography and the dancing and the music rouse in you as a watcher watching.

What do you hope audiences take away from the film?

Curran: The message in the film is about death and disease and dying versus living with longing and regret and sadness and grief and rage. Going on with your life and going back to do your work gets such an interesting update in the film for the college students who are in rehearsal reconstructing the piece. Bill and Roz ask “What is YOUR AIDS crisis right now? Today? Is it gun violence? School shootings? Rape on campus?” This again is art doing its job. What can these young dancers pour into their performance of D-Man In The Waters to make and find meaning and purpose in their own 2021 present day lives? Where is your urgency? Where is your passion? What do you care about?

Get your tickets now on Rivertown Film Society’s website. Seating is limited and purchasing tickets in advance is recommended. Folding chairs and benches are provided; attendees are welcome to bring their own comfortable lawn chair if they like.