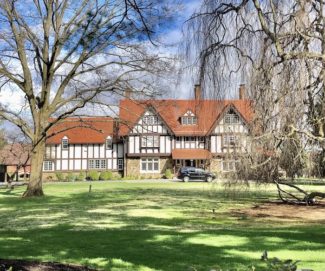 Judge Tompkins was a self-made man who was a giant of public service at the turn of the 20th century when he built the Tudor-Revival style mansion Glen Iris at 401 N. Broadway. Achieving success in politics, and as a trial lawyer and jurist, he was never far from his farming roots that stretched back 8 generations to Tudor England. In photographs, he appeared as the very face of a stern New York State Supreme Court Justice and a kingpin of Rockland County Republicans, complete with a robust handlebar moustache. The judge, however, mixed fun with probity. He hosted clambakes at Glen Iris and pursued his loves of trotting horse racing and cigars with passion. In 1907 he commuted to his office in White Plains as a Supreme Court Justice via horse and sleigh over the frozen Hudson River. He was such a cigar aficionado that the Rockland Tobacco Company of Nyack sold a Judge Tompkins Corona with the tag line, “A Supreme Cigar Verdict.” 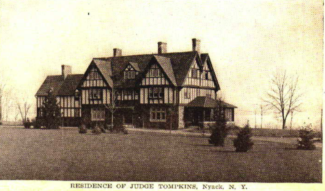 Not much landscaping in this early photo of Glen Iris. Courtesy of the Nyack Library.

Without the surrounding trees the property contains today, Glen Iris was a more imposing mansion when it was first built, one befitting a future Supreme Court Justice. Glen Iris is a resplendent example of the Tudor Revival style of architecture popular in the early 20th century. Glen Iris features natural materials in the fieldstone first floor, exposed crossbeams embedded in stucco on the upper floors, multiple overhangs, and multiple large chimneys. Steeply pitched roofs and multi-pane windows complete the style. Today, the estate blends into a pleasing glade of mature trees.

How exactly Tompkins, a high school dropout, came to wealth so quickly is a story of hard work, grit, and the connections he made through politics and numerous civic organizations.

Tompkins Family Dates Back Almost to the Mayflower

Arthur Sidney Tompkins was the seventh generation of Tompkins to live in America. His forebearer, John Tompkins, emigrated from England to Concord, MA some time prior to 1640, joining a colony under Rev. John Jones. Tompkins followed Jones west and became one of the founders of Fairfield, CT. Tompkins eventually settled in Westchester from 1644-1688, an English settler among a predominately Dutch population.

The family remained in the area for many generations. John Tompkins III, residing in Yorktown, was a cousin of Daniel D. Tompkins the fourth Governor of New York and the sixth Vice President of the US, the only vice president in the 19th century to serve two terms. 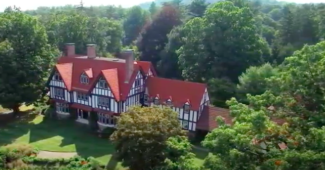 Arthur’s father, Sydney Brooks Tompkins, was born in 1831. He was a farmer who married twice at the age of 22, first to Caroline Cole and then to a widower, Mary Hazy Yokum Taylor. They moved to West Nyack in 1866 when Arthur was a year old. Sydney Tompkins is variously listed as a farmer, a schoolteacher, and an expressman in historical records. An “expressman” is a term used to describe armed security guards who traveled on the “express” train car that transported cash, gold, and other valuables. 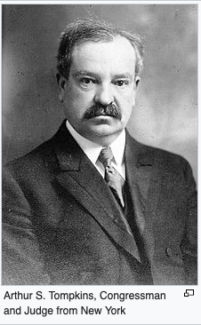 Arthur Sidney Tompkins was born on August 26, 1865, in Middleburgh, NY, Schoharie County. Arthur attended public schools in Clarkstown and Nyack and left grammar school at age 13 to work as a clerk in a dry goods store in Nyack. At the age of 16 he started “reading” law at the offices of Seth Cole of Nyack, Abram A. Demarest of Nyack, and Henry Griffin of Tarrytown. While clerking in Tarrytown he met Jeanie C. Logan and they married in 1889, residing in Nyack where Arthur practiced law. He was known as one of the best trial lawyers along the Hudson River.

Arthur was a born politician. He was a poll worker at 18, an elected Nyack police judge at age 21, the leader of the Rockland County Republican Party at age 23, and the youngest State Assemblyman at the age of 24. He became County Judge at age 28 and was then elected to the US Congress for 2 terms at age 32. However, his heart was not in Washington, and he missed 215 of 232 roll call votes. He left office in 1903 after 2 terms and returned to the practice of law. 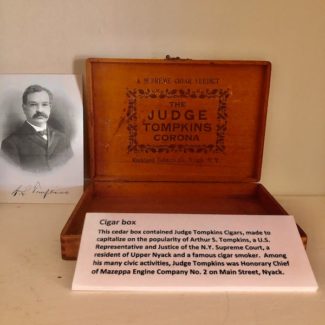 Judge Tompkins brand cigars. From the Historical Society of the Nyacks Collection.

In 1906, he was elected Supreme Court Justice and continue to serve for 29 years until 1934. He was frequently mentioned as a candidate for Governor and the U.S. Senate, each time declining because of a desire to continue judicial practice.

During the last 6 years of his term, he served as Appellate Judge in Brooklyn. He was appointed to preside over many delicate political investigations, including the bribery trial of William Anderson, the former head of the state Anti-Saloon League, the trial of Frank Warder, state superintendent of banks, and the trial of Maurice Connolly of Queens in connection with a sewer scandal. All 3 served time in Sing Sing.

Tomkins Was an Active Member of Fraternal & Civic Organizations

Newspaper photo of Judge Tompkins leading the Mazeppa company during a parade.

Tompkins was a joiner. He was a member of the Masons, Elks, Mazzepa Fire Company, and Odd Fellows, all of which chose him as state leader at various times. He was a member of the Knights of Pythias, the Foresters of America, and the Junior Order of American Mechanics, all in Nyack. He was permanent president in the exclusive Order of Camels, a group of attorneys and officials who met periodically for social dinners. The last session was held in Nyack a few weeks before Tompkins entered the hospital. For many years, Tompkins was the Director of the Nyack YMCA. He was a member and President of Mazzepa Fire Engine company for 50 years, often seen leading the company at parades. He was a member of Nyack Baptist Church for 50 years. 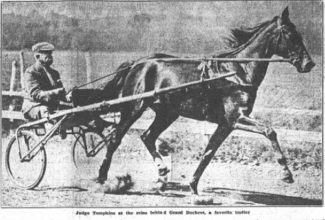 Amid politicking, building a new house, and starting a family, Tompkins somehow found time to compile a major history work, Historical Record to the Close of the Nineteenth Century of Rockland County, published in 1902.

Tompkins was an ardent trainer and driver of trotting horses. Harness racing was one of America’s earliest sports and Tomkins loved to race. He owned horses from time to time, training them at the Orangeburg track where he had a family box. He also raced at the nationally known trotting park in Goshen. He last big race was in 1934 at the age of 69 when he defeated former Justice Albert Seeger of Newburgh, 6 years his elder.

Judge Tompkins acquired one of the most historic properties in all of Nyack that was once part of the farm owned by Henry Palmer, a New York City patriot during the Revolutionary War who moved to Nyack when pressured by the British to become a Tory. Ever after the Revolutionary War, the home of Captain Palmer, located near the juncture of Old Mountain Road and Broadway, was shelled by British boats. During a British raid, his wife barely escaped from the shelling of their home by running west up Old Mountain Road. The lawn of Glen Iris, the riverside portion of the Palmer’s land, probably still contains buried cannonballs. 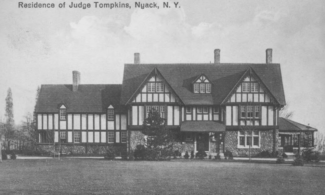 Postcard of Glen Iris circa 1915. A grace was added to the left wing at a later date. Courtesy of the Nyack Library.

Unlike many of the estates in Upper Nyack, the building of Glen Iris was not heralded in the local papers. The family of 4, Arthur, Jeannie, Marjorie, and Arthur, Jr., moved from Tallman Place to Glen Iris sometime around 1901. The name Glen Iris is a salute to his wife who immigrated from Scotland as well as shout-out to the well-known William Letchworth home, also called Glen Iris and now an inn, located upstate at the falls of the Genesee River.

The Tudor Revival exterior is continued inside the house of approximately 6,500 sq. feet of living space with 8 bedrooms and a solarium with a terracotta floor. The entrance hall is wood filled with wood beamed ceiling, chestnut paneling, and an elegant stairway. Many of the original interior details remain according to real estate listings in 2017. The house has floors of quarter-sewn oak, 4 working fireplaces, a silver sink, and many built-ins. An old circuit box and the servant room-signal light panel were retained during a renovation that updated the systems and the kitchen.

Marjorie Jean Tompkins, born in 1890, was a lifelong Nyack resident living at Glen Iris until 1949. She was an artist and interior decorator, and never married. For many years she had an office in downtown Nyack and ran the Gift Tree, a shop selling gifts and home furnishings. The store had several locations, last at 12 S. Broadway. Marjorie died at a Masonic nursing home in Utica, NY in 1979.

Arthur S. Tompkins, Jr., born in 1902, married Nancy Frost, one of the twin daughters of Leroy Frost, an investment banker who built the nearby WideWater estate at 539 N. Broadway in 1906. The couple moved to Connecticut. 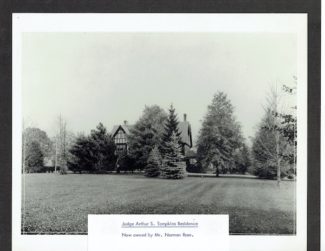 Tompkins’ health began to fail in 1936. A foot infection led to amputation of his left leg. He recovered and, for a time, returned to his duties. In early 1938 he suffered a stroke and died on January 20, 1938. Jeanie continued to live at Glen Iris until her death in 1959. The Tompkins’ are buried in Oak Hill Cemetery.

Around the time Glen Iris left family hands, the riverfront and the south part of the estate were sold and subdivided with houses to the south and east along the S-shaped Tompkins Court. In 1960, Glen Iris, now on a little over 2 acres, was sold to Norman Rose, who had been living at 221 River Road in Grand View.

Norman Rose was an actor and radio announcer known for his famous baritone voice. He was the voice of Juan Valdez on ubiquitous TV coffee commercials and was a film narrator in movies such as playing the part of Death in Woody Allen’s 1975 Life and Death. Rose also acted in a number of daytime “soaps.” Norman Rose died in 2004 and Catherine Rose sold the property in 2014. 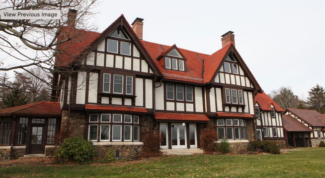 Glen Iris exudes a timeless historic visage in Upper Nyack, a testament to a man with an enormous civic presence known to all at the time but who is now mostly forgotten. Judge Tompkins was a man from a different age, one in which a New York Supreme Court justice could commute from his home to Westchester on a horse-drawn sleigh smoking a cigar as he crossed the frozen Hudson River.