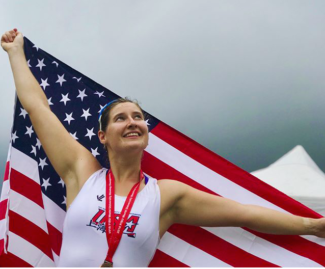 Olympic rower Charlotte Buck of Nyack who is competing in the women’s eight race is the latest standout in a long history of rowing in Nyack. Buck trained initially with the Rockland Rowing Association, then joined the Columbia University team as a walk-on. She went on to be team captain. After graduation, she won a bronze medal with the American University Rowing team in Beijing. The Rockland Rowing Association will hold a viewing party in her honor at their new venue on Rockland Lake. Team USA was the favorite in the medal round but finished 4th, 1.5 seconds behind China. The disappointment of not medaling in no way diminishes Buck’s achievement.

Throughout the years, rowing has undergone peaks and valleys in popularity. Once before, rowing was the most popular sport in Nyack with races on the Hudson. Given this long history of rowing, it is fitting that Charlotte Buck carries the torch forward.

Brief History of Rowing in the US

Rowing was the first intercollegiate sport in America. Boston, New York, and Philadelphia were the principal centers of rowing. The Harvard-Yale Regatta started in 1838. College and amateur clubs begun to dot the shores of many cities. Around the time of the Civil War, the famous Boathouse Row on the Schuylkill River in Philadelphia was built and later celebrated by a rower, Thomas Eakins, in his famous rowing paintings. On the Hudson River, New York colleges built boathouses along the Harlem River. By the 1870s, there was an epidemic of rowing in America as single scull rowing had its heyday. Crowds cheered the rowers.  Wherever a few rowers came together, clubs would be born. 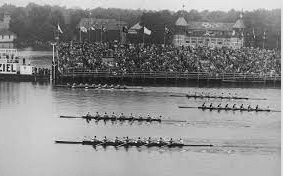 Newburgh and Poughkeepsie became the venues for high-stakes rowing. Heavy betting went on among the thousands who lined the banks to watch the regattas at Newburgh. Races then were out and back, usually two miles to a turnaround so crowds could watch the start and finish. Eventually, professional rowing disappeared due to betting corruption. Amateur races continued into the 20th century. The famous 1936 pre-Olympic races in Poughkeepsie were seen by over 10,000 people. A special train was used so that some could follow the race as it occurred. The University of Washington team went on to beat the favored Nazi team in Berlin, a story told in one of the greatest sports and rowing books of all time, The Boys in the Boat.

As ardent rowers, Arthur Merritt and naval painter Julian O. Davidson became the prime movers behind the formation of the Nyack Rowing Association. The club, formed in 1881, was organized to foster the sport of rowing. Many of the leading citizens of Nyack became officers and members of the new group. Membership was somewhat exclusive. Initial fee was $10 with annual fees of $24. Even before they purchased boats and a clubhouse, the club members decided on official colors, white and red with uniforms of French gray with a cardinal-red band diagonally across the front and back, dark navy-blue trunks and a cap of gray and red.

Funds were raised for a new boathouse by holding theatrical benefit performances. The necessary $5,000 was raised by August 1881. The club leased a dock at the foot of Spear St., the former People’s Dock of Nyack. The building was designed by W. H. Smith and construction by the DeBaun company took 5 months.

The building was a glorious Victorian temple to rowing, 90 x 84 feet in size. It had the latest technology, running water, gas for heating and lighting, and electricity to power the entrance light. (Nyack was not electrified until 1887.) The building was a real man-cave, perfect for a men’s-only club. Wives and girlfriends were allowed in on Tuesdays beginning at 10:00a. The first floor of the building housed boats and oars, the second contained a ballroom for social events, the third floor held dressing rooms, and the fourth-floor tower room on the north corner contained a prized billiard table. At some point. a single-floor building was added on the west side of the dock to house a bowling alley. Facing the river to the east, French doors opened to a wide veranda that surrounded the building on three sides with fine views up to Hook Mountain to the north and to Tallman Mt on the south. 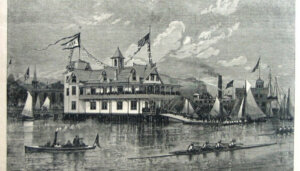 Davidson’s etching of the Regatta at the Nyack Rowing Association.

A formal opening was held for members, wives, families, and friends on the evening of June 15, 1882. A concert, food, and a fireworks display made up for the fact that races were postponed due to heavy winds and rain.

On the 4th of July 1882, the association held a regatta that was to be an annual 4th of July event. Other clubs were invited including the Piermont Rowing Association. A little steamer was chartered to carry judges. The building and all nearby points were packed for those who wanted to see the races. The races started with junior sculls, followed by senior sculls, four-oared sculls, and a fun “tub” race.  Davidson’s team bested landowner Voorhis when his scull was swamped, and the crew was forced into the water. At night the association hosted a buffet dinner, a “hop,” and a fireworks display. 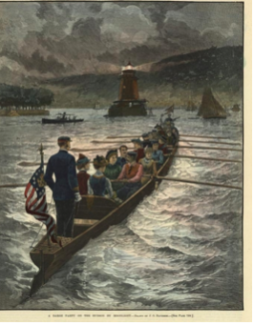 Davidson’s etching of a barge party.

side from a full agenda of racing, the club became a social center in the village. They purchased an eight-oared barge capable of holding 24 people. Christened the Nyack, the boat was rowed to New York City and back on its first voyage.  The group often rowed across the Hudson River to Tarrytown and back with a dance and refreshments in the club upon return. The barge parties included female friends and spouses and became so famous they were featured in Harper’s Weekly with an illustration by Davidson. The rowing association caught the attention of the younger generation the most. Even Edward Hopper was a devotee. He sketched his own wooden rowing machine in his attic as an early teen in the mid 1890s

As with so many clubs and sports trends, the rowing club went into a slow decline. Davidson, one of the driving forces behind the club, fell ill with Bright’s disease and died in 1894 at the age of 40, ending the promising career of Nyack’s most famous naval painter. In 1894, noted Nyack politician Clarence Lexow took over the reins of the club. It revived again for a short for a time but seems to have disappeared around 1901. The clubhouse was then rented by a boatbuilder. The clubhouse, now derelict, was destroyed by a hurricane in 1950 and the last vestige of the Nyack Rowing Association disappeared.

Rowing and rowing clubs have undergone a renaissance in the 21st century.  Club shells can be seen at Rockland Lake, Nyack Pier, and in Piermont. Matt Hudson, owner of Hudson House restaurant in Nyack, is one example of an intrepid Hudson River rower. He takes his scull named Miss Gnomer, out every day he can. During the pandemic year he rowed on 277 different days. 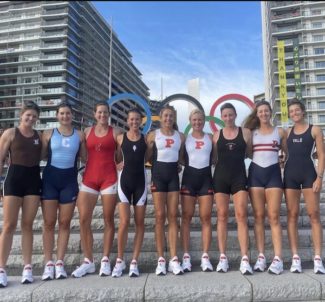 Like many who came before her, Buck came to the sport in a roundabout way at age 19. She was captain of the Nyack High School tennis team but never placed better than second in the county championships. She left the basketball team to participate in theater and debate where she excelled in high school mock trial and moot court. Her sister convinced her to join a rowing team and she started with Rockland Rowing Association masters team in the summer of 2014 making her mom go out on the water in a double. She was a walk-on with the Columbia University team as a freshman, and the rest, as they say, is now history. She went on to captain the team in her junior and senior years.

While rowing is currently the focus of her life, Buck is an achiever in everything else she does. She has been a vegetarian since the fourth grade and runs a vegan Instagram page, @vegan_testkitchen. She has gone on to coach juniors at Rockland Rowing Association who have inspired her through their ability to push each other to be better every day.

It has been a long journey for Buck from high school debate team to Olympian in sport that doesn’t really pay. She recently had to switch from single oar sweep rowing to double-oar rowing for the Olympics. She had to retrain as a single sculler and work her way up from there. In 2018, she was selected for the World University Rowing Championships where her team finished with a bronze. “It was cool,” she said, “but I have to keep going, I really want to win.” The pandemic changed racing from outside to inside virtual races using rowing machines. Buck just lost out to the world champion by 14 meters over a five-minute race.

The US rowing trials this spring were tough, the final was “the worst thing she had ever done.” But she made the team. In preparation, she says, “It’s exciting, but I know it’s going to be so difficult mentally and physically,” Buck said, “I think I am up for the challenge.”

Not everything that should happen does happen. Team USA just missed medaling, finishing 4th in the finals.