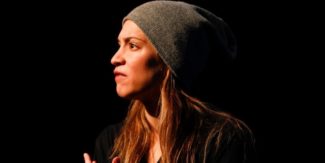 Honduras came about through the work of a group of New York and New Jersey artists–women and mothers–who worked with Immigrant Families Together. They raised bail money for mothers held at the American border and then arranged a relay team of cars across the country to reunite them with their families. Each asylum-seeker in this story crossed the border in the summer of 2018. All names are changed, characters are dramatized and highly interpreted versions of people and scenarios, but nothing has been exaggerated. I spoke with Craig Smith, Founder and Managing Director of Phoenix Theatre Ensemble, Elise Stone, Phoenix Theatre Ensemble Artistic Director, Actress Valeria Avina, and Playwright Sara Farrington about Honduras.

Why is now the time for the public to see Honduras?

Elise: Theatre is, at its core, about sharing stories that illuminate our human-ness and the human experience, in all of its complex and varied forms. Theatre has the ability to deepen our empathy for others, as we participate in witnessing our own humanity through the lives of the people on stage. It does not matter if we are watching a Greek tragedy or a comedy by Moliere, or a play by Tennessee Williams. Each human story, brought to life and shared in a live theatre experience, is a shared communal heartbeat. This heartbeat brings us closer to understanding that, although we are each singularly individual, we are also more alike than different at the very center of our vulnerable human existence. In these times of great division, I feel it is my duty as an artist and artistic director, to bring this deeply moving and human play to the stage. I am grateful to Sara Farrington, Valeria Avina, Evan Zes and the Edward Hopper House Museum and Study Center for making that possible.

What have you learned through this collaboration?

Sara: This collaboration reinforced a few things I already knew: that a compelling theater piece doesn’t need much more than a great performer telling a dramatic story in a space. (Sometimes you don’t even need any more actors than one!). It has also been another lesson for me in letting go, which I think is important for a playwright to do. This piece is entirely Valeria’s experience and work, under both her own direction and the great Evan Zes who directed the piece originally. I am so grateful for the ownership and artistry Valeria has brought to it, something that can’t be written on a page, but has to be performed and seen.

How has the pandemic affected your performance practices?

Craig: We have been treading water for 14 months. This is our first live performance–and this is the
play to break our pandemic lockdown. Is it political? If truth is political, then I guess it is. So be it.
What I do know is…“you won’t forget Honduras.”

I consider Valeria Avina to be one of our most versatile actors working today as she plays 31 roles in
a powerful and emotional performance. Honduras has taken on a life of its own from readings to
festivals to these performances we are presenting in Nyack. One of the tenets of PTE is
“Community” and we are so proud to bring this powerful play to our community of Nyack and to
have it function as a benefit for the invaluable resource of the Edward Hopper House Museum and
Study Center.

Valeria: Working with Sara moved from a collaboration between playwright and actor to something
deeper and personally profound for me as an artist and as an immigrant. These are powerful true
stories. Every performance is a privilege but also a tremendous responsibility to the women and girls
who lived these lives.

What do you hope for audiences to take away from the play?

Sara: Two things. First, the truth of the accounts and the everyday logistics of walking here from Central America. Second, some accounts from the volunteers from Immigrant Families Together heard from asylum seekers were shocking, violent, and tragic. Many sounded like accounts from World War II, not 2018, when I wrote this piece. Up until I volunteered with IFT, I was not entirely aware of the horrors in Central America that drive civilians from their homes. But it took the revelation of our own horrors in the US to open my eyes. The “zero tolerance” policy of the last president is nothing short of a war crime and had a profound effect on me. Separating parents from children is something reminiscent of American slavery, the Holocaust, etc… So, I think it’s really important never to forget that the last president enacted this practice on a mass scale in 2018. (I hope there are consequences, I worry there won’t be). Regarding the logistics of walking here, I found that daily struggle fascinating. I had questions like:
How do you know the way? What are the busses like? Can you hitchhike? What if your kids get sick/hungry/thirsty? How do you get attached to a group coming here? How long is the raft right across the Rio Grande? What if you run out of money? I think the answers to these questions are important to know and I try to address them in this piece.

Get your tickets for Saturday, June 26th or Sunday, June 27th.