After a bill passed Thursday, trans and nonbinary New Yorkers will likely be able to update their IDs with “X” gender markers. 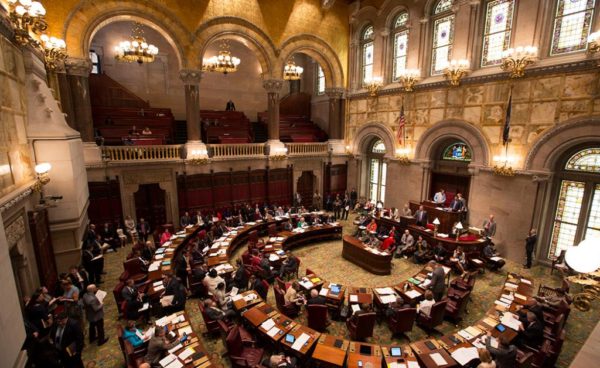 After years of stalled legislation and lawsuits, New York passed a bill  to issue state IDs with nonbinary gender markers.

The State Assembly and Senate passed the Gender Recognition Act Thursday night, granting nonbinary and intersex residents the option of “X” gender markers in addition to “M” and “F.” The bill also discards the longstanding rule that requires those seeking name changes to publish both their name and their name given at birth in a newspaper.

For Sander Saba, a 26-year-old resident who sued the state last year to get their ID updated, the bill’s passage has both practical and symbolic meaning.

“I felt a lot of times insecure about asking for the things that I need that other people don’t have to ask for, like having the correct name on the document, to have people use my correct pronouns,” Saba said. “I’ve often felt that these asks are a burden to others … but having a law like this passed shows that at least the people in charge of our state do not see this as an inconvenience.”

Assuming that Gov. Andrew Cuomo signs the bill, New York would become the 21st state to issue gender-neutral driver’s licenses and state IDs, in addition to Washington, D.C. It also updates the state’s birth certificate policy for gender diverse residents, including minors who can update their documents with parental consent.

The move is seen as especially timely as the Biden administration has indicated that the State Department may begin issuing “X” gender markers on passports and other federal documents  this year.

The New York Department of Motor Vehicles has vowed to roll out the gender-neutral markers since November 2020, but residents are still waiting on the IDs. That promise was made in response to Saba’s lawsuit filed last July.

Ethan Rice, a senior attorney at Lambda Legal, which represents Saba, said the state asked nonbinary people like Saba to wait too long for an accurate ID.

“Just to have your government recognize you as who you are is hugely important,” Rice said. “For a lot of people, to not have mismatched documents that out you in different ways or that can lead to people believing that you have fraudulent identity documents.” The paperwork discrepancies, he said, create huge problems for trans and non binary people.

New York Assembly Member Daniel O’Donnell, a co-sponsor of the Gender Recognition Act, said the move was long overdue. Lawmakers and advocates have pushed for a similar law for years, but it wasn’t until transgender residents were able to safely be out and lobby their legislators directly that the bill gained traction, he said.

“I really didn’t have to convince anybody,” O’Donnell said. “Trans people are now much more willing to reach out to their legislators and go to them and say, ‘I live in this community, and this is what I need.’ So a lot of that work was done.”