In 1853, Bill Traylor was born into slavery on an Alabama cotton plantation, then lived as a sharecropper after the Civil War. Nearing the end of his life, he moved to Montgomery and worked odd jobs. At 80, he was houseless, but began to paint and draw from his experiences of life on plantations and the influence of his new urban environment on his psyche. Bill Traylor: Chasing Ghosts, a documentary directed by Jeffrey Wolf, conjures Traylor’s unique spirit and creativity.

Traylor’s life maps the ghost of slavery in America from Reconstruction, to Jim Crow segregation, to the Great Migration, and reveals a remarkable self-taught literacy in visual languages. Much of Traylor’s work engages with oral cultures and traditions represented in his thousands of colorful, modernist drawings and paintings. 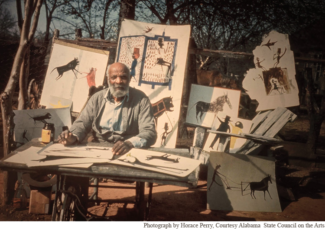 Portrait of Bill Traylor surrounded by his works.

The documentary won the Jury Prize for Freedom Award at the Fine Arts Film Festival and uses archives to construct the narrative of Traylor’s imagination creatively on screen. Many activists and organizers have championed the film and the renewed focus on Traylor’s life. Andrew J. Young Jr., 14th U.S. Ambassador to the United Nations, noted that “Bill Traylor’s art speaks to the universal language of humanity–a cry for justice, dignity and resilience.” The Southern Poverty Law Center calls the film “a celebration of art and the best of humanity transcending poverty, racism, and despair.”

The work produced by Traylor between 1939-1942 was the subject of a Smithsonian retrospective. His themes of legalized racial indiginities have an enduring resonance and ask the audience to imagine the ways these attitudes and mythologies have taken new forms today.

Rivertown Film Society will screen the documentary from May 7th with Community Partner Rockland Center for the Arts. Tickets are on sale now.