In what remains of Jo Nivison Hopper’s archive, there’s a simple water study of what appears to be a woman’s dresser: Oil Lamp and Vase of Flowers. As in many of her early works, the natural objects, the flowers, have the brightest, boldest colors, especially when compared to the muted appearance of the hand mirror, the hairbrush, and the body of the lamp. 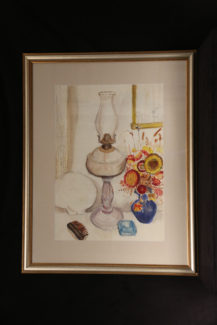 This study appears visually linked to one of Jo’s two paintings at the Whitney: Obituary. A similar arrangement of flowers in a vase is offered in this painting, but the flowers take up more room in the frame than in Oil Lamp and Vase of Flowers. Instead of a more private scene, the rendering of Obituary includes a surreal view of Cape Cod and Washington Square Park, where Jo and Edward spent most of their lives. This one brings out more particular details of a life against the more universal decorations of a home.

In another one of Jo’s works, she studies Washington Square Park a bit more closely, framing a statue with the trees. The composition reminds me of Edward’s Shakespeare at Dusk (1935). This piece was linked by historians and critics as an ode to literary influence, as many of Edward’s works are. Painted in the year of his mother’s death, Hopper’s biographer, Gail Levin, suggests that the painting might be in conversation with Shakespeare’s Sonnet 73, using the story-world of the image to confront mortality and grief present in the poem:

That time of year thou mayst in me behold

When yellow leaves, or none, or few, do hang

Upon those boughs which shake against the cold,

In me thou see’st the twilight of such day

As after sunset fadeth in the west

Which by and by black night doth take away,

Death’s second self, that seals up all in rest.

Death and the cycle of life is on display in Jo’s Obituary as well. Though we don’t know the exact year of the painting, the color of these flowers are drained. Studying Oil Lamp and Vase of Flowers as spring with Obituary in mind, gratitude emerges for earth’s sudden vibrance. Even looking between the two sides of the image, one vibrant and the other sparse, we are asked to hold that the bloom is here and gone at once.