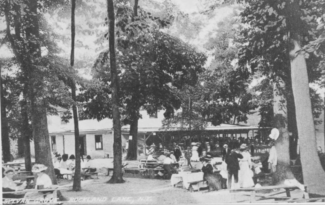 The aroma of a clambake permeated a grove of trees near the Northwest corner of Rockland Lake in 1874 as some 500 people gathered for the Rockland County Farmers’ Picnic at Sylvan Grove. A 60′ long table boasted a cornucopia of melons, crackers, corn, potatoes, and 20 kegs of clams. The Sicilian Brass, a band from Verplanck’s Point, played in the afternoon. People swam and boated. Revelers danced until midnight on the dance platform. Such was the first event at Sylvan Grove, an 11-acre picnic and amusement park, with facilities for picnicking, dining, playing baseball, fishing, boating, swimming, stables, and amusement rides. Sylvan Grove was the local prototype for the resorts, hotels, bungalows, restaurants, and dance halls that would later populate in and around what would later become Rockland Lake State Park. In the early days before 9W, a stagecoach helped carry people from Nyack along the round-about, S-shaped road over Hook Mountain and through the village of Rockland Lake down to Sylvan Grove 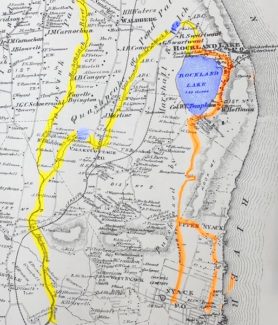 1876 map of the area. Kill von Beast and the Hackensack River are shown in yellow. The Hackensack was once the water source for Nyack. The lakes and ponds are in blue. A small mill pond is shown on Old Mill Road. Congers Lake was not yet constructed. The tortuous road from Nyack to Sylvan Grove is in orange. The horseshoe bend is shown.

A small stream, once called Beast von Kill exits the Pond to the north turning west and then southerly toward the Hackensack River. Both the stream and the Hackensack River are much altered today by dams. A small dam was built for ice farming on the kill by the Swartwout family who acquired land forfeited by Tories during the Revolutionary War. Swartwout Lake is still a prominent feature of Congers just north of Lake Road and west of 9W. In 1890, a new dam was built downstream by the Boston Development Company as a part of their development project for Congers. Congers Lake, as it became known ever since, went through many changes until it was acquired by Clarkstown in 1970. Further downstream along Mill Road in Valley Cottage a mill dam was built on Kill von Beast in the 18th century. The Kill flows into the Hackensack River just above the current dam on the dammed Hackensack River that forms Lake Deforest.

The pond became known as Rockland Lake once the Knickerbocker Ice Company incorporated in 1831. The Village of Rockland Lake expanded along with the ice business. Through the center of the village, the “ice train” carried ice to the waiting barges on the Hudson River at Slaughter’s or Rockland Landing. A summer business of rock quarrying was carried on by Wilson Foss of Upper Nyack next to the ice train, providing summer work for the employees of the Knickerbocker Ice Company (and nearly destroying the nearby mountains in the process).

An ad for a 20th century hotel and resort on the south side of the lake.

Around 1800, a neighborhood, identified as Quasbeck by historian Arthur S. Tompkins, existed along the south side of the lake consisting of a few summer boarding houses and a hotel. This is where Nyack villagers would come to fish and catch the famous large Rockland Lake bullfrogs. Tompkins repeats the story of a John Smith, (Rockland county’s most common name), who owned and freed a number of slaves in 1800. Their dwelling was converted into a schoolhouse where religious services were also held. It was so near the lake that children were said to catch fish from its windows. This neighborhood became famous for the Quaspeck Park Beach Club and the Quaspeck Casino in the 20th century.

Getting To Sylvan Grove Was Not Easy

The horseshoe bend on what is now 9W. Photo courtesy of the Nyack Library.

It is a little hard to imagine how people traveled north from Nyack before 9W beelined up the west side of Rockland Lake. The old highway followed Native American footpaths. Getting to Sylvan Grove from Nyack involved navigating over Hook Mountain, around the eastern side of Rockland Lake, through the village, and then downhill along the north side toward Congers. The highway up Hook Mountain was especially narrow and steep including a hairpin switchback known as Barmore’s Horseshoe, Barmore being the family that owned much of the nearby property, and one of the families to found a predecessor to the Knickerbocker Ice Company. The horseshoe can still be found by following the blue-blazed Long Path from Upper Nyack that follows the old roadbed and turns to the right at the horseshoe.

Sylvan Grove could be reached in two other ways. The newly opened West Shore Railroad with a station in Congers provided access for city dwellers. Over time a spur railroad was built from Congers to Sylvan Grove. Sylvan Grove could also be visited by boat via Slaughter’s Landing.

As automobile traffic increased in the 1920s to Bear Mountain Park, 9W was straightened from the north side of Hook Mountain to Long Clove in Haverstraw. Cars could then access Sylvan Grove without going around the eastern side of the lake. 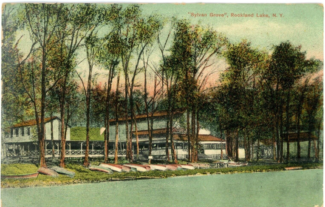 Some of the first managers of the grove went on to start Rockland Lake hotels. The nearby Lake View Hotel was started by a former manager in 1877. From the 1880s through the mid 1890s, George Swartwout ran the grove as it grew in popularity. Stables and feed were provided for horses. Boats were provided for rowing and fishing. The grove grew in popularity. Church groups, veterans’ organizations, fire engine companies, and others came from as far away as Jersey City and Hoboken. Dances were held every Wednesday night. Dance, boating, and swimming contests were held. The restaurant was run by leases and different vendors would bring amusement rides. In 1894, for example, a merry-go-round was installed for the summer. By 1900, a fall season was established. For a short time, a trolly was set up to run from Haverstraw to Sylvan Grove. The brakes failed at the Clove during the inaugural trip’s return to Haverstraw.

Early ads indicate that alcohol was not allowed, yet even so, drinking ended up causing problems. In 1897, a police officer was injured while breaking up a drunken row on the 4th of July at Sylvan Grove. Frank Walsh was arrested and sentenced to three years in Sing Sing for hitting the policeman. In 1909, the grove manager was charged with selling liquor on Sunday. 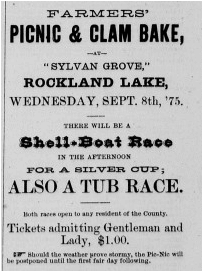 Increased competition and lack of investment led to a slow decay of Sylvan Grove. By 1928, both the Rockland Lake ice business and Sylvan Grove were abandoned. The  dance pavilion and dining facilities were no longer operational. A dramatic fire that burned the nearby empty ice houses also consumed Sylvan Grove’s bowling alley. It too had been condemned. Along and across 9W new casinos and restaurants went up. In the 1930s,the Palisades International Park Commission (PIPC), already interested in the lake, leased land for a gas station and lunch stand near the old Grove.

The Grove went through a small revival under another name in the 1940s. It became a fishing haven with docks and boats for hire with picnic grounds nearby. During the war years a 5 ½ pound bass was caught near the docks.

In 1958, the many properties for sale around Rockland Lake caught the eye of Nelson Rockefeller. Through his work and the Rockefeller Foundation funds were found for PIPC to acquire some 1,000 acres. Much of the village of Rockland Lake was regrettably lost as were the hotels, restaurants, and summer cottages around the lake. Still, imagine the complete loss of this much used green space to private development and urban sprawl. Today, the nature area at the park is near where Sylvan Grove once stood. 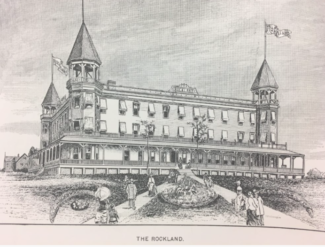 It is worth noting the impact Sylvan Grove had on tourism in the area.  One of the most notable contemporaneous examples was the Grand Rockland Hotel built in 1892 by the Boston Improvement Company who was busy developing much of Congers and Congers Lake. The hotel was spectacular. It had 50 rooms with lake and river scenery and advertised as the “healthiest place in America” in the New York City papers. The Congers train terminal was only 45 minutes from the city via the West Shore Railway. Cottages were also available. Good boating, fishing, and bathing were promised, and physicians endorsed it for its wellness. A casino was built across from the hotel with a dance floor, billiards, and a café.

The exact location of the Grand Rockland is not anywhere stated, although accounts said it had views of both lake and valley and was built on a bluff. The location may have been on what is now New York Avenue that appears on an 1876 map or perhaps closer to the west side of the lake. 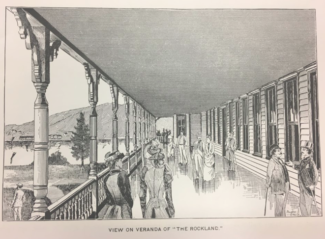 Just as the hotel was celebrating its first five years, the entire building burned to the ground. Some 63 guests and employees escaped in their night clothes. A 63-year-old banker from NYC jumped from the third floor and broke his leg as well as other injuries. Some guest took the 5:16 train back to the city wrapped in blankets. Others moved to the nearby Sawyer and Ford Houses. The fire was visible even in Nyack. John McGinnis of Boston Improvement Company promised that the hotel would be rebuilt, but it was not to be. In fact, the hotel was later referred to as McGinnis’s’ folly, in part, because the building was under-insured.

The shouts of delight from children swimming and playing, the band playing for dances and afternoon picnics, the sounds of amusement rides, and the loud murmur of picnickers in a grove of trees with views of stunning Rockland lake have been replaced by golf courses, swimming pools, parking lots, and state rules and regulations. Gone are the many resort hotels from the 19th century when trains and stagecoaches brought guests. Gone are the cottages, restaurants, and small hotels that catered to automobile tourist but if you listen carefully near the nature park along the lakeside promenade you might just hear some of those sounds of old, the childish laughter, dance steps on a wooden platform, and the hum of well-dressed picnickers talking during a 19th century outing.

Rockland Lake, Hook Mountain, and Nyack Beach by Robert C. Maher, Jr., 2014. Excellent historical photos of the many camps, bungalows, restaurants, and hotels in the area. Several shots of amusement rides likely to have been at Sylvan Grove.