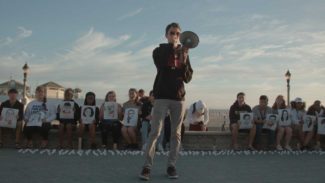 A still from Us Kids.

“To me, the film is a coming-of-age story about what represents a generation. It’s about a bunch of regular teenage kids who live their lives against the backdrop of this horrendous national issue of gun violence,” says Kim A. Snyder, director of Us Kids, which opens today for streaming with Rivertown Film Society on their website. “The film begins with this tragedy, and we follow what happens to Samantha Fuentes in her school, in her town, and the group of kids who set out to do something about it. For these kids, whose friends and classmates died, the tragedy was a catalyst. The story is born out of trauma and rage, which simmers throughout, and it serves as a window into this generation and movement that is so different than—yet also has so much in common with, the Vietnam era and the Civil Rights movement. These kids have to grow up so quickly and their willingness to give up everything to fight for those who were lost makes them able to build a remarkable and unprecedented movement that I believe is real and lasting.”

Snyder also directed the Peabody Award-winning documentary Newtown and this latest documentary by Snyder was nominated for the Grand Jury Prize at the 2020 Sundance Film Festival. The film arrives in a moment where there’s been a national spotlight on the power of youth organizations across all advocacy movements. In particular, the documentary follows X Gonzalez and the March For Our Lives movement over several years as the founders, survivors, and teenage activists join together to hold the largest youth protest in American history. Their movement goes beyond gun violence and speaks to racial justice, a growing public health crisis, and shocking a political system into change. Ultimately, the narrative of the film chronicles a generation of young leaders coming-of-age.

“Us Kids skillfully handles a sensitive subject and prudently connects the Parkland students’ stories to those of Black students whose experiences with gun violence rarely garner similar national attention,” Lovia Gyarkye writes in The New York Times. “The film generally strikes an optimistic tone—highlighting the resilience of these young activists and the community they created. But no amount of editing or overlaid emotional ballads can shake the unsettling fact that these teenagers, whose lives were disturbed by unthinkable acts of violence, feel abandoned by the systems meant to protect them.”

Rivertown Film Society will hold a conversation on these feelings of abandonment, gun violence, and meaningful political change on Tuesday, May 25th at 7:00 PM EST with with members of Moms Demand Action, Rockland, via Zoom. Tickets are $9.99 and are available here.