I’ve never thought of myself as much of a sports fan, but I’ve been a casual Knicks fan all my life. My parents weren’t particularly into it. I never went to a game until I was an adult. But I was nine when the Knicks won the championship in 1970, and it was epic for me and Skip Hyde. I got a huge poster of Clyde Frazier and hung it on my bathroom door. Not running or jumping or passing but completely still, just dribbling, about to make his move. A picture of pure potential. Clyde was my idol. He still is, as a color man for the Knicks on MSG Network. 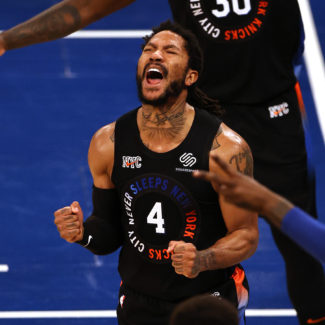 The Knicks are the heart of the city. No other team plays in Manhattan. And they weren’t broadcast all day, every day back then. I followed the Knicks through newspapers and radio, The Times and the Post and the News, and Sports Illustrated. My romantic, gimlet-eyed impression of both sports and writing itself stems from their columns. Curry Kirkpatrick wrote flowery, allusive prose in longer pieces for SI. And from the Vecsey brothers, George the older, sober, measured Times reporter and Pete the impish joking sprite who wrote really a gossip column about basketball for the Post. Who’s getting traded, who’s an asshole, who’s messing with whose girlfriend. Pete was a great read. He always had the skinny, and people hated him for it. And he didn’t care.

But the Knicks have been bad for twenty years or so now, often downright terrible. They went 17-65 in the 2018-2019 season. That’s a .207 winning percentage. Covid was a blessing to them.

Enter Tom Thibodeaux. New coach and a ‘brilliant basketball mind.’ That’s thrown around a lot, but in his case, it’s true. He never played the game. He looks like a troll out of Grimm’s Fairytales.

But he knows what he’s doing. In his first season he brought the Knicks to their first playoff series.

I’m watching tomorrow with my brother-in-law Pete, who is a a true, die-hard, Knick fan. Not the jersey-wearing, screaming at the TV type, though he may have watched every Knick game ever broadcast since the seventies. He played point guard in high school, so he knows the game. And he knows every center, point guard, power forward the Knicks have had since Joe Lapchick roamed the earth. Plus, when they were traded, and who for. And every draft pick. And coach. And length of tenure. He’s amazing. He doesn’t allow green in his house. It’s the Celtics color.

Watching basketball these days is extraordinary. The pure athleticism of every single player, not just the stars. And the stars—OMG.  At 6’1” Trey Young of Atlanta is tiny, but he’s what they call an ‘ankle-breaker’ to defenders. The Knicks have Julius Randle, who’s having a terrible series but will no doubt come alive tomorrow. And Derrick Rose, who had a similar type of game to Trae Young earlier in his career but now, at 32, is the high scorer for the Knicks and almost singlehandedly keeping them in this series. But even those players without the wow factor demand their own kind of respect. Take Nikola Jokic of the Denver Nuggets. At 6’11”, no one’s going to mistake him for a ballerina. But watch his footwork inside. Watch his no look passes to Jamal Murray or Michael Porter Jr. That’s poetry. He will probably be this year’s MVP.

The Knicks are down 2-1 in their first round series with Atlanta. They’ve  got to win this game. We’ve got to win. For the Knicks, at this point, I am hardcore into changing my pronouns from They to We. We need to win. We, the Knicks. If we win this series it would be epic. And if we lose I’ll cry like a 9-year-old.