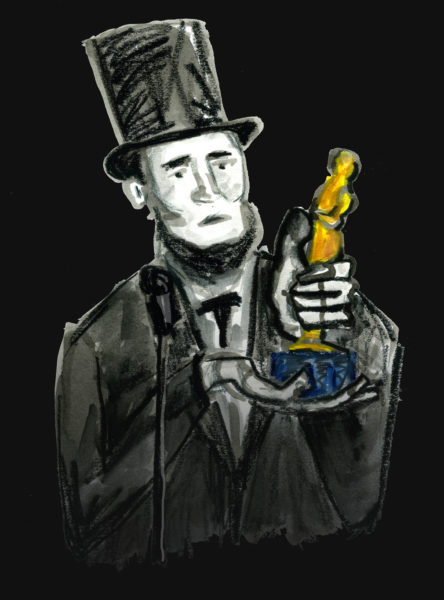 Want an Oscar? Get real!

No, seriously, get real. Play a real person.

The Oscars have a history of loving… history. An inordinate number of Best Actor awards have been given to performers playing a real person. My findings below are hardly exhaustive, but I’m fascinated by the whole idea of the “biopic” and its innate failings. The concept of the biopic is odd to me because most are about someone the audience is familiar with. The film and lead performance become more about “Wow, they made her look just like Margaret Thatcher!” or “She does a good Tina Turner!” I’ve rarely seen a biopic where I was completely involved; I’m usually taken out of the story because I’m comparing the actor to the real person.

It’s another case entirely if the actor and/or the subject is mostly unknown to me–say George Arliss as Disraeli or Charles Laughton in The Private Life of Henry VIII. Even then, however, I may feel distanced from the film by age makeup, or the actor lip-syncing to hit tunes sung by the actual performer, or a 1940s car showing up in a 1930s story. I am apparently in the minority with my opinions, though. The Academy loves the mimicry. If you’re an actor, take heed, and don’t forget to thank me in your acceptance speech. Here are three tips in how to (at least) be nominated for an Oscar.

In 1936, Luise Rainer won the Oscar for Best Actress, playing Ziegfeld Follie’s singer Anna Held in The Great Ziegfeld. In 1968, Barbra Streisand won for playing Fanny Brice (who also worked for showman Florenz Ziegfeld) in Funny Girl (side note: Streisand tied for the Oscar with Katharine Hepburn, who was playing real-life, but non-singing, Eleanor of Acquitane in The Lion in Winter). Other music-related Oscar winners for Best Actress: Sissy Spacek as Loretta Lynn in 1980’s Coal Miner’s Daughter; Reese Witherspoon as June Carter Cash in 2005’s Walk the Line; Marion Cotillard as Edith Piaf in 2007’s La Vie En Rose.

These actresses were nominated for Best Actress for playing performers: Susan Hayward as Jane Froman in 1952’s With a Song in My Heart; 1955 audiences saw Eleanor Parker as Marjorie Lawrence in Interrupted Melody and Susan Hayward as Lillian Roth in I’ll Cry Tomorrow; Debbie Reynolds as Molly Brown in 1964’s The Unsinkable Molly Brown; Julie Andrews as Maria Von Trapp in 1965’s The Sound of Music; Vanessa Redgrave as Isadora Duncan in 1968’s Isadora; Diana Ross as Billie Holiday in 1972’s Lady Sings the Blues; Jessica Lange as Patsy Cline in 1985’s Sweet Dreams; Angela Bassett as Tina Turner in 1993’s What’s Love Got to Do With It.

What actors played entertainers but didn’t win a Best Actor Oscar? Larry Parks as Al Jolson in 1946’s The Jolson Story; Gary Busey in 1978’s The Buddy Holly Story; Roy Scheider as Bob Fosse in 1979’s All That Jazz; Tom Hulce as Amadeus Mozart (1984); Robert Downey Jr as Charlie Chaplin (1992); Laurence Fishburne as Ike Turner in What’s Love Got to Do With It (1993); Joaquin Phoenix as Johnny Cash in Walk the Line (2005).

The following actors struck gold playing real life participants of war: Gary Cooper portrayed Sergeant York (1941), a pacifist during the first World War. Maximilian Schell prosecuted Nazis in Judgment at Nuremberg (1961). George C. Scott was WWII General George Patton in 1970’s Patton. Adrien Brody, as Wladyslaw Szpilman, hid from the authorities in Warsaw in 2002’s The Pianist. Gary Oldman embodied Winston Churchill in 2017’s The Darkest Hour. As far as I can tell, the only actress who fits this category is Kate Winslet in The Reader, playing a former concentration camp guard.

These actresses played crusaders, in one form or another, and have an Oscar to show for it. Sally Field fought to unionize in Norma Rae (1979). Jodie Foster starred as Sarah Tobias, a woman who fought against the perpetrators of her brutal attack in The Accused (1988). Susan Sarandon as Sister Helen Prejean fought to comfort a Dead Man Walking (1995). Hilary Swank fought for the right to be Brandon Teena instead of Teena Brandon in 1999’s Boys Don’t Cry. In 2000, Julia Roberts fought environmental pollution in Erin Brockovich. Sandra Bullock fought to provide the best possible life for a homeless teen in 2009’s The Blind Side.

Men in this category include Paul Muni, fighting for health in 1936’s The Story of Louis Pasteur. Spencer Tracy started Boys Town for boys at risk (1938). In 1982, Ben Kingsley played Gandhi, who fought to free India from British rule. Daniel Day-Lewis fought to create art despite his cerebral palsy in My Left Foot (1989). 2008 saw Sean Penn as Harvey Milk (in Milk), fighting for gay rights. Matthew McConaughey, in 2013’s Dallas Buyers Club, fought to get HIV/AIDs medication to people in need.

It’s  impossible to condense a person’s life into the time span of a feature film. But, of course, many of these films are excellent. If they do nothing but spark the desire to know more, to read a biography of Gandhi, Patton, or Julia Child, or to listen to the real Von Trapp Family Singers, that’s worthwhile.

This article was originally published in 2018, and it has been slightly edited.

Holly Caster knew in 9th grade she wanted to be a writer after receiving an A+ on a paper about 1930’s actress Irene Dunne. That early triumphant high hooked her, and she’s been writing ever since. She writes nonfiction (self-help articles), fiction (a novel, Cape May), and edits two continuing medical education journals. She’s proud to call Nyack “home.”