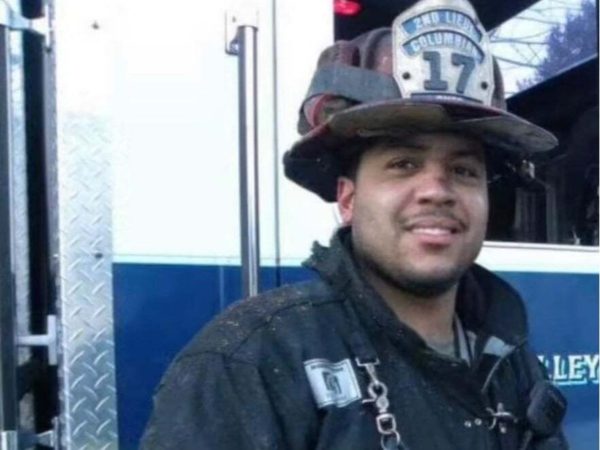 When I came off the crest of the hill heading down Spring Valley’s Main Street at 1a Tuesday, March 23,  just 8 minutes after the alarm for the fatal Evergreen Court Home For Adults fire in the village, I could see the lights of the responding Columbian Fire Engine Co. No. 1 trucks. A few hours later, Jared Lloyd, one of their volunteer firefighters, would be gone, perishing in a hellish blaze in an old hotel.

Oddly, I saw the Columbian rigs just as I passed the old Ramapo Trust Co. building site at Main and Lawrence where another Valley volunteer gave his life some decades ago, rushing on foot from a nearby event dinner to jump into the fire scene.

This time, in that selfless dashing to save lives, it was Lloyd, a 15-year fire service veteran with the Columbians, the oldest of 3 Valley fire companies (1861). Jared leapt  into action, immediately responding while everyone slept. Because of his bravery, his life was given. He gave it. Because of him and his fellow firefighters from Rockland’s many departments, as well as police, EMT, Evergreen staff, and community members, all 112 residents were rescued with an unfortunate but single fatality among them.

Training for Rockland volunteer firefighters is rigorous, scientific, and on-going, the county’s special academy at the Fire Training Center in Pomona so well-respected that some cities and states have sent trainees.

So, when firefighters like Jared Lloyd hear the fire tone and jump out of bed or leave work to report to the station house or fire call site, they do so with an adrenalin rush, yes, but also with clicked-in super, smart training. Both save lives—courage and education.

All that bravery, study, and practice, though, cannot always keep the firefighter alive. Hellish fire, with flaming lips that change direction like a serpent, smoke that is not gray but black and so acrid that it challenges face masks and air packs, and the disorientation that comes from not knowing the fire scene’s floor plans, door and window exits and actual construction materials, can make a crapshoot of firefighting, however well-trained the firefighter is.

There will be services for the latest Rockland fallen fire volunteer; his name will be added to memorials. There will be studied reviews of the Evergreen fire, and lessons will be learned and then taught in Pomona and at many fire academies.

But the intangible of any bravery such as Jared Lloyd’s is the greatest lesson, the most significant tribute of all: that one willingly gives a life for others.

Art Gunther is a retired newspaperman. You can read this column and others at his blog, The Column Rule.