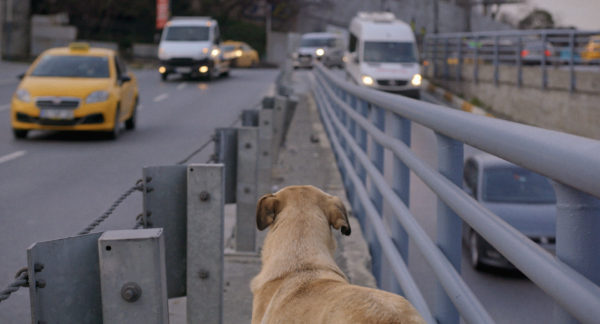 It’s rare to find an animal on film that isn’t treated as an object simply responsive to the desires of human protagonists. Even nature documentaries are guilty, often becoming cutesy odes to a narrative the filmmaker places on their subject rather than letting the animal reveal the truth of their own experience.

This makes sense; American media largely follows a human-centered perspective. Animal rights and protections are continually contested, and factory farming practices endure despite being well-demonstrated mechanisms of both environmental and bodily harm. But one thing that seems largely agreed upon in the United States is that our pets, our dogs and cats in particular, deserve status and protection. But is napping on our living room couch the best design for a dog’s life? What would it look like for a dog to roam free, to live as an individual, a protected being within a city?

These are the questions that Elizabeth Lo explores in her stunning new documentary, Stray. Lo gets on the ground with 3 stray dogs in Istanbul, which made the killing and trapping of stray dogs illegal, and follows their canine impulses: the camera goes where the dogs go. The story follows the rhythm of a day in a stray dog’s life, which it turns out is rich with emotional complexity, social interaction, and chosen companions.

What’s also apparent is that even when existing outside the confines of a human’s home, dogs are drawn to sharing beds with people, revealed in a scene where a group of stray dogs nap with a member of a group of houseless refugees, and that they enjoy sitting with humans at parks or following them through crowds. One of the most touching scenes comes when the driver of a sanitation truck notices one of 2 dogs he offered bones to taking both; he stops the trucks, intervenes, and ensures equity by redistributing the bones. But as the film progresses and the dog’s lives further intertwine with human dramas, the barriers to accessing care reveal familiar forces: intervention of police, unequal social support.

Even as the film resists the human viewer from interpreting animal meaning, it’s hard not to wonder what information is exchanged when leashed dogs cross paths with the strays. Are they jealous? Do they recognize a new possibility for their life? Do they want to play? This is the very anthropomorphizing Lo wants us to get closer to: What would it look like, feel like, to truly see the world in a new way? What if the story of the earth wasn’t in fact about us? What if we in fact don’t know what’s best for our dogs?

You’ll have 30 days to start watching Stray once you rent the film on rivertownfilm.org. Once you begin, you’ll have 72 hours to finish watching. There will be a discussion of Stray on Tuesday, March 16, at 7p EST with Josh Abolt, Kennel Manager at Hi-Tor Animal Care Center, and Suzanne Mitchell of Rockland Organized for Sustainability and a Safe Aquifer (ROSA) and director of Running Wild: The Life of Dayton O. Hyde.

Alongside Stray, Rivertown Film is screening Gustav Stickley: American Craftsman, which traces the development and evolution of Stickley’s unique style as well as his furniture manufacturing, the Craftsman Magazine, and Craftsman Farms, which is linked to the farm-to-table movement. It also details the eventual loss of his businesses. There was a discussion about Gustov Stickley: American Craftsman on Tuesday, March 9, which was Gustov Stickley’s birthday, with film director Herb Stratford, Vonda Givens, Executive Director of the Stickley Museum, and Kristi Zea, director of Everybody Knows … Elizabeth Murray and an Oscar nominee for Art Direction and Producing. It will be available on the film society’s YouTube Channel.

Watching the films together may suggest new connections and origins for the way we design and exist in our homes.