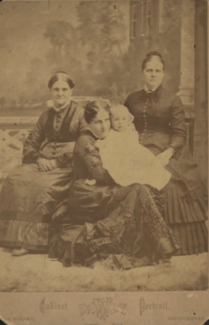 Isaac Marshall Van Wagner, Nyack’s first professional photographer, never said “Cheese” when he took a portrait photograph. We know this because not one single person smiles in the thousands of photos that were taken 150 years ago by Van Wagner and other portrait photographers of their time. Why didn’t anyone smile? Today, among the billions of digital photos, there are more teeth-baring smiles in a single minute than were seen in the entire 19th century. Was it that much worse of a time?  Even Abraham Lincoln and Queen Victoria, known for their sense of humor, never smiled in any photo. Can the story of Isaac Van Wagner’s portrait photos help us understand the lack of smiles?

Isaac Van Wagner was born in the lower Hudson River Valley of Dutch heritage. His father was a laborer and mason. Isaac was a different species from the beginning. Born on New Year’s Day 1843, the 1860 census shows Isaac living at home with his parents and 3 siblings while employed as an ambrotypist at 17 years of age.

An ambrotypist was an early wet-plate negative process of photography that was easier and cheaper than making daguerreotypes. A bleached negative was mounted on a dark background and a positive image appeared. Ambrotypes were popular in the 1860s, but soon replaced by a cheaper form, the tintype, where the image was made on tin rather than a glass plate. Unfortunately, we don’t know how Isaac come to train for this career that was still in its infancy at such an early age. 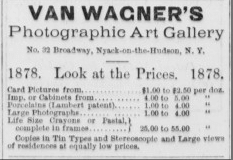 Van Wagner often advertised in the Rockland County Journal. This ad is from 1878.

After serving in the Civil War, Van Wagner married Martha Ann Lee, the same age, and perhaps a childhood sweetheart. By 1870, they have moved to Nyack where Isaac set up a photographic art gallery. His first gallery was on Burd St. near Broadway. Later he moved to larger quarters at 32 S. Broadway. In 1880, he purchased the first lot in DePew Place at 68 S. and constructed a 3-story brick building that still stands. His studio was on the first floor with apartments upstairs. The Van Wagners lived nearby at a brightly painted house at the southeast corner of Cedar Hill Ave and S. Broadway 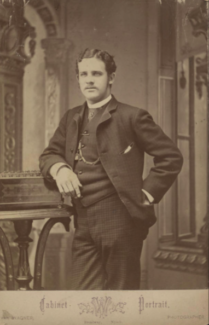 Cabinet portrait of Stephen Merritt. Courtesy of the Nyack Library.

At the gallery, Van Wagner sold mostly portrait photos. He made 4×6” cabinet cards that had replaced the smaller (and cheaper) carte de visite, which he also made. Both were made by albumen prints that give them their distinctive sepia tones. Cabinet cards usually had the name of the photographer on the front as did Van Wagner’s cabinet cards. Van Wagner also made large scale portraits, porcelains using the Lambert process, and life-sized colorized photographic portraits using crayons or pastels, which he sold framed.

That importance given to his photographs is evident by the fact that the Rockland County Journal mentioned the names of many of the people he photographed. Not everyone could afford a portrait; most show middle-class citizens stylishly dressed. While all his portraits merit attention, a few representative portraits show unsmiling Victorians at their best.

In his portrait photograph, Stephen William Merritt (identified on the back of the card), a handsome and prosperous villager, strikes a Napoleonic pose in front of a painted backdrop, gazing to camera left, his hand resting on a table with an ornate box. Around his neck is what looks like a Masonic medallion. In all likelihood this photo was taken around the time of Merritt’s marriage to Minnie Carran at age 24. Merritt was the son of a prominent Nyack chaplain who worked as an undertaker in Nyack. Van Wagner captures this dramatic moment in Merritt’s life. Success seems assured, and it’s not a moment to smile about.

Tragically, Merritt died 9 years later of typhoid fever contracted as a second Lieutenant while training in Peekskill. He left Minnie and 3 children. 4 years later, Minnie died of suicide by poisoning in her New York City flat. 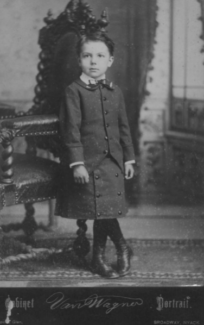 Cabinet portrait of a boy whose name is unknown. Courtesy of the Nyack Library.

Children of all ages were frequently photographed in the 19th century, but unlike now, none smile. His cabinet portrait of an unknown young boy captures a confident, mature child. He leans insouciantly against a leather chair, in one of Van Wagner’s favorite poses, staring camera left. He wears his finest outfit, a buttoned leather coat and skirt, leather boots, and a striped bow tie.

Family portraits were favorites at the studio. In one surviving example, 4 generations of unsmiling Merritt-Crawford women are shown in an 1881 cabinet card. Dressed in high Victorian style, the family gives off the classic grim photographic visage of the period. No smiles here.

Van Wagner took portraits of villagers of civic importance. His portrait of Tunis DePew is a good example, and the only photograph we have of the prosperous grandson of the Tunis DePew who purchased much of Nyack between Depew and Cedar Hill Aves. Tunis ran the premier greenhouse in Nyack along Piermont Ave. He developed the 2 rows of brick buildings along S. Broadway south of Hudson Ave. The Presbyterian Church (now the Nyack Center) and the Liberty Street School were also built on his land. Tunis would fit in with today’s sartorial styles. He sports a chin strap beard and unkempt hair. In his comfortable patrician pose he gazes to camera right. He is unsmiling but the curve of his lips indicate he sees the humor of the attempt to capture a vain, once-in-a-lifetime shot. 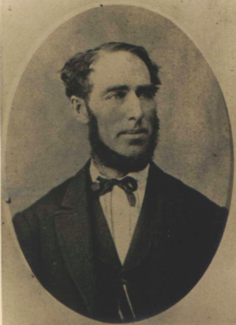 Reference is made in Van Wagner ads and in several newspaper articles to his life-sized crayon portraits that were framed by him. None have been found in any digital archive. They must have been head shots. The Rockland County Journal reported that the crayon and pastels were used to “colorize” the portraits. A pair of portraits done in 1874 of a popular Nyack train conductor and his wife was said to be “something marvelous… every feature is clearly defined… you almost expect the parted lips to speak.”

Apparently, many wealthy summer visitors to Nyack from New York City who could not find any colorized portraits as good at “home” were frequent buyers.

It wasn’t just Van Wagner’s photos. In all 19th century photos, there were no smiles. Some have postulated that people didn’t smile in 19th century photos because the sitters didn’t want to show off bad teeth or a lack of teeth. This hypothesis is probably more a bias of our time when modern dentistry has left us with acres of white teeth to display in every posed digital photo.

Others have suggested that no one smiled because the exposure time was so long that no one could hold a pose for that long. That was once true. But by Isaac Van Wagner’s time, exposure was in fractions of a second. In fact, Van Wagner advertised “instantaneous photographs” in the 1880s. 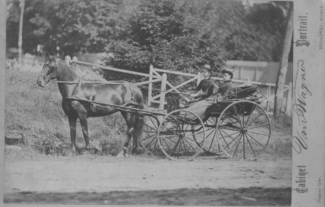 Outdoor cabinet portrait of two young women in a carriage. Courtesy of the Nyack Library.

Some historians postulate that was just a grim time after the horrors of the Civil War. However, was the late 19thcentury any grimmer that the horrors of the first half of the 20th century when people began to smile for photographs?

If it wasn’t physical, technical, or teleological, then why didn’t portrait photographers like Isaac Van Wagner produce smiles in their portraits? The answer is that Van Wagner and others advertised themselves as studio artists. Photographers used the tradition of painting as their model, harkening back to centuries of commissioned paintings. In those formal oils, smiles are rare and then often only in the hint of smiles as with Leonardo’s Mona Lisa. The photographic portrait was thought of as once-in-a-lifetime event, and there was nothing humorous about it.

By the turn of the 20th century, with the advent of the Kodak camera, portrait photography changed. Suddenly everyone could take a photo. It was fun, and people smiled. By WWI, school photos began to show students smiling and everything changed.

Nearly everyone today tries to smile for a photograph. If Van Wagner’s time was a grim age, are we the silly, self-conscious age? It is hard to imagine Van Wagner grinning for a selfie. Do we miss those serious, stoic unsmiling people of old photos, their sense of order and correctness, their indirect gaze looking not at us but off into the future? You decide.

Nyack People & Places, a weekly series that features photos and profiles of citizens and scenes near Nyack, NY, is brought to you by Sun River Health, and Weld Realty.
In this article:Cabinet Photographs, DePew Place, I. M. Van Wagner, Isaac Van Wagner, photography, Tintypes, Tunis Depew