The Story of Miller Dairies 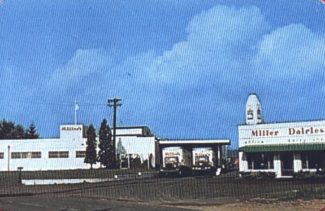 Postcard showing the Miller Dairies in West Nyack near the cloverleaf between Rts. 59 and 303. Courtesy of Robert Palatano.

The clinking of glass bottles and the firm snick of a silver insulated metal box lid closing once announced the arrival of the milkman. An integral part of mid-century village life, the family-owned Millers Dairy, along with their milk bar, are now a distant memory, the site covered over by the Palisades Mall. Home delivery of milk, butter, cheese, and eggs, as well as chocolate milk, to the lucky few came from the West Nyack dairy.

Miller Dairies operated in the halcyon days of mid-century modernism. It was a personalized business. Customers knew their milkman, wives invited them in during breakfast, their American Legion baseball league competed as the West Nyack Milkmen, the bowling team won prizes, and an endless number of elementary school students toured the plant. Miller Dairies was not the only dairy in Rockland County to deliver milk (Nanuet Dairies, Brookside Farm, and Rockland County Milk & Cream Co. did too) but it had a special place in many residents’ hearts.

A Brief History of Milkmen 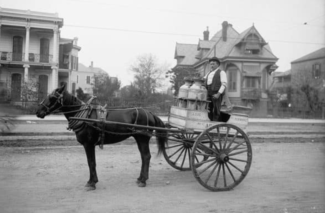 Today, we think of home delivery of food stuffs as a 21st century internet innovation. But home delivery of milk started in 1795 in Vermont. In the early days, the milkman would go door-to-door with a metal barrel full of milk and filled jugs, pails, or jars supplied by the customer. Frequent home deliveries were important because homes had no refrigeration. Home delivery really came into its own with the invention of the glass bottle, first the Lester milk jar in 1879 and then the Thatcher milk bottle in 1884 that came with a cap. By the 1920s, dairies were etching their name and logo on their bottles. Milk was first delivered by cart, either horse or hand-drawn, later by motorized Divco trucks that the milkman drove standing up.

Orders for milk were picked up the day before delivery. Milkmen would deliver the milk, pick up the empties, and collect payment. In most cases, milk was placed in an insulated metal box on porches or doorsteps. Some locals remember that they knew the milkman so well, he would come right into the house without knocking and put milk into the fridge. 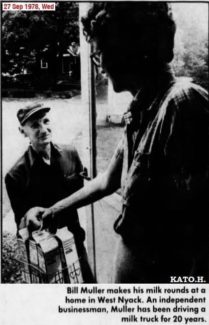 Bill Muller was the best-known local milkman. Muller was a WWII vet who started out delivering bread and then became a milkman for the Miller Dairies covering routes in Nyack, West Nyack, Valley Cottage, and Sparkill. Around the time Miller Dairies closed, Muller started his own business, Muller Dairy, buying milk from Dellwood Foods in Yonkers and covering three retail routes, often with his son, Joe. His wife, Cornelia, kept the books. Overall, Muller delivered milk for some 40 years, and was among the last of his breed in the county. Muller once said, “When I first started in the business, home milk delivery was the thing in Rockland County.” After the TZB opened, he remembered, people who moved here from city “had to have home milk delivery. There must have been more than a dozen dairies to choose from.”

Muller was the quintessential milkman. He was there every day. He knew all his customers well, sometimes chatting with housewives. Valley Cottage resident Robert Patalano has a childhood memory of the kids chasing Muller’s truck around the neighborhood. He would often give the children chocolate milk, orange juice, or a chunk of ice, all the while chomping on a cigar. One day, he stopped young Robert to tell him that his shoes were untied, showing him how to tie them.

Garret Miller, Sr., born in 1873 was the son of German immigrants. By the early 1900s he was living in West Nyack and the father of twin boys and a daughter. By at least the mid 1920s he was living on Old Mill Road in Valley Cottage and running Miller’s White Farm on Lake Road. In 1928, it was rated as one of the most modern dairies in the state and the first in Rockland County to offer pasteurized milk. According to Miller, demand for pasteurized milk was just overtaking raw milk among his customers. He was turning out 4,000 quarts a day, 80% pasteurized. In 1930, Miller received the highest marks for pasteurized milk and cream cheese at the State Fair, his raw milk was third from last. 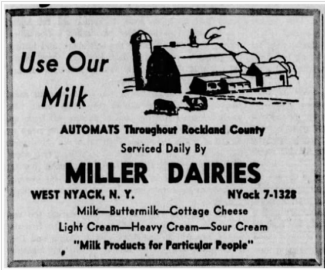 In 1937, Miller moved his dairy to a new location in West Nyack at the northwest edge of the cloverleaf at Rte. 59 and 303. The offices sported a jaunty milk bottle logo on the roof. Garret Miller, Jr., recently graduated from NYU, became the plant manager. Over time, the dairy became the leading independent dairy in Rockland County, getting milk from 28 farms. The plant was piped with stainless steel, sending milk to a clarifier first, then a pasteurizer, and then to a bottling line. By the 1950s, a homogenizer was added to mix butterfat with the milk so that the cream did not rise to the top.

Some 10,000 quarts were made 7 days a week. Their delivery service covered Rockland, Hudson, and Bergen counties. In later years, they also sold milk in paper containers and through drive-up kiosks located throughout the county. Over the holidays, they offered eggnog.

Next door to the dairy was Miller’s Milk Bar, complete with mid-century black-and-white tiled floors and counter stools. Milk shakes, ice cream, and food were served.

The Case of the Purloined Milk Route

In their start-up year, Miller Dairies hired Clarence Baker, an experienced milkman who had worked for the McDermott Brothers Dairy, to deliver milk and make new sales. It didn’t work out. Baker was let go in March 1938, taking the customer list with him to a Pearl River milk producer. Baker had a contract with Miller Dairies but the non-compete terms were in dispute. Miller took him to court claiming lost business. After a long, drawn-out court process that didn’t end until July, Baker was ordered by the court to stop soliciting Miller’s Pearl River customers beginning at the last date of his employ.

Miller Dairies was always a touch-and-go, low-margin business. The Millers opened up a light-plane airport just west of the dairy along with a car dealership. Each had their own business difficulties.

In addition to start-up problems with milkman Baker, Miller had to face a strike in 1939 by the Milk Drivers and Dairy Employees of the A.F.L. that was in turn backed by the self-interests of large milk companies who wanted to drive independents out of business. Union members had been promised a 5-day work week that in the opinion of Garret Miller Sr. would force him to hire weekend drivers (apparently being a milkman was nearly a 24/7 job) and a new supervisor, neither of which he could afford.

Milk route drivers and some plant workers, who sometimes worked 12 hours a day, 7 days a week, went out on strike, the drivers coming back after the first day wanting their jobs back on the same terms. The plant workers however had already been replaced by the time they came back. For several weeks, a few strikers picketed in front of the plant and milk bar, then it seems to have fizzled out and the diary remained a non-union shop. 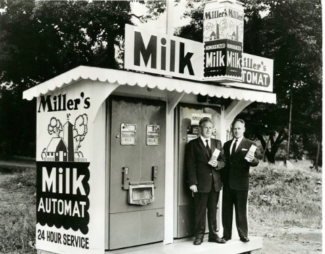 In 1952, the ice cream and milk bar closed. McDermott’s Milk Bar moved from the Jackson Ave location to a large milk bar on Route 59 near the Thruway in the early 1950s, and attracted many customers from Nyack.

Garret Sr. passed away in 1959, Garret Jr. closed the airport and, in 1972, the entire operation was sold to the Dellwood Dairy Co., a large company that distributed milk in metropolitan New York and New Jersey, and upstate New York. They had previously acquired the Rockland Milk and Cream Co of Spring Valley. While the milk-producing dairy was gone, milkmen soldiered on a while longer.

Where Did the Milkman Go?

Why did home delivery of milk decline and disappear? By the 1940s, most had home refrigeration, meaning home delivery was not required as often as it once had been. By the 1950s, large grocery stores contained refrigerated cases. Not only milk, but bread, fish, and dry goods were integrated into one store. People got used to driving to the grocery store. Milk was cheaper because the cost of the milkman was eliminated. Additionally, more women worked and were not at home during the day to pick up milk. Driving to the grocery became second nature. 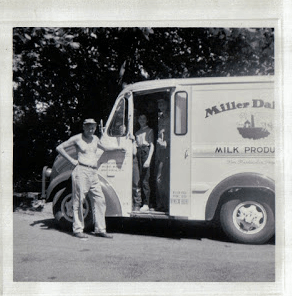 Joe Muller and his dad on the milk route. Visit his wonderful blogpost.

Miller Dairies lasted longer than most local dairies, and was one of the last independent plants to process its own milk in Rockland County. Other dairies purchased bottled milk from large producers and continued to distribute via milkmen. By the mid-1970s, home delivery was slowly disappearing and only a few milkmen were left. Bill Muller ran his own operation. George Donzella, an ex- bread delivery man, had one route of 140 customers distributing Crowley’s Milk from Newburgh. He said that when he “started there must have been about twelve of us.” Maple Grove Dairy at the corner of Waldron and Rt. 59 in Central Nyack continued with 6 drivers.

Today the clink of glass bottles coming from the front sidewalk are a distant mid-century memory. Gone are the rugged individualists who worked long days and knew all their customers. It’s left to the American songbook to memorialize the ubiquitous milkman as in the 1935 Academy Award winning song, “Lullaby of Broadway”:

Good night, the milkman’s on his way, 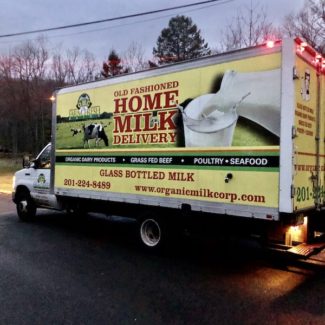 On the morning after I finished writing this article, I noticed a modern organic milk (and meat) delivery truck in my neighborhood. Are we heading backwards to our future?

Nyack People & Places, a weekly series that features photos and profiles of citizens and scenes near Nyack, NY, is brought to you by Sun River Health, and Weld Realty