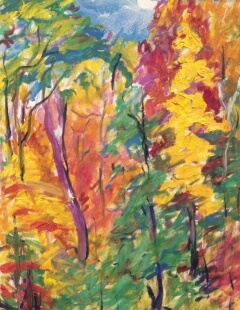 Kristin Roeder, Hopper House Program Manager and educator at the Whitney, has long been drawn to Jo Nivison Hopper’s remaining canon. “Paul Cézanne was already established as a prominent pioneer of modern art by the time Jo would have heard of him or encountered his work, and I wonder if she experienced any of it on trips to Europe,” Roeder says. In 1907, long before her marriage to Edward, Jo traveled to Holland to take her mentor Robert Henri’s landscape and portrait courses, techniques Jo would return to in her artist practice throughout her lifetime. During this trip, Jo also traveled to Italy and France.

“One main connection I see involves her landscapes, the use of color/brushstrokes, the ‘flattening’ of pictorial planes, and the idea expressed by Cézanne that ‘painting from nature is not copying the object; it is realizing one’s sensations.’” In the following image from Jo’s early work, her scenes of nature depict vitality. There is a great deal of motion within both landscapes, the scenes potent with color and plant life. To me, they seemed to be created through the eye of an observer drawn to the magic of wild, untamed life. In the exhibition catalog from a show at the New Gallery in Manhattan in 1922 where Jo showed her watercolors alongside Picasso, there’s a comment about her work adding a “gay note of color.”

Highly social and involved in the Greenwich Village art communities, Jo was involved with the socialist art magazine The Masses. She contributed sketches rallying readers to be non-conformist and often spent summers in Provincetown with other radical artists throughout the early 1910s. While Jo crossed paths briefly with Edward during this period, they did not connect. Mary Heaton Vorse and Susan Glaspell, both feminist writers, housed and supported Jo and many other young artists. Throughout their marriage, Edward drew cartoons mocking Jo for her years spent in these feminist communities.

Another possible influence on Jo’s style is Florine Stettheimer, a contemporary, though slightly older, but with whom Jo had a show in the early 1920s. Both women had long histories of involvement within feminist circles and experimental theatre communities. Jo likely crossed paths with Stettheimer or at the very least, the shadow of her. “Stettheimer was a prominent personality in avant-garde NYC and international artistic circles, and I’m personally crazy about the way she dynamically embraced a lot of the aesthetic that Jo later in her career described as ‘pitifully female.’ Only recently has Florine Stettheimer really started to receive the kind of attention she deserves for her innovation and artistic vision, as is the story with many female modern and postmodern artists.”

Like Jo, Stettheimer’s work is playful, featuring flowers and female figures from her life (often her sisters and mothers). “I especially connected Stettheimer’s work with Jo’s Obituary, because of the combination of perspectives (views of Truro combined with the Washington Square Arch), shifts in scale, and presence of flowers and ‘feminine’ subjects.’ Though Stettheimer’s work has a consistently more celebratory vibe, I think,” says Roeder. In the later works from what remains of Jo’s body of work, her use of color is muted. The portraits she paints of women, and herself, are sparse.

But when I look at Jo’s early work, I think of an anecdote Jo shared second-hand from her mother, Mary Ann. When Jo was a toddler, she yelled in protest against her mother’s orders. A friend of Mary Ann’s was visiting and told her mother that she should break Jo’s temper. Mary Ann refused. She thought her daughter might need her anger one day.