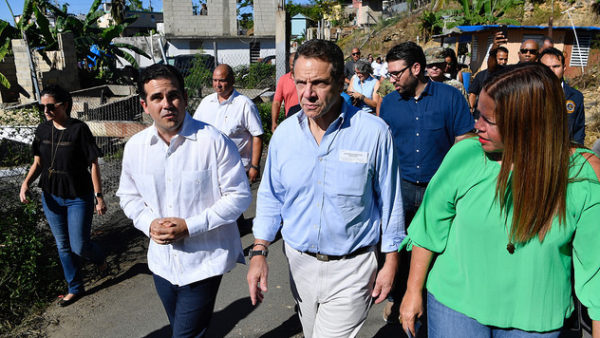 Both U.S. senators from New York and at least 14 Democratic members of the state’s U.S. House delegation have joined calls for Gov. Andrew Cuomo to resign amid allegations that he sexually harassed women, created a toxic workplace and mishandled the coronavirus pandemic in the state’s nursing homes. He has denied wrongdoing.

“Due to the multiple, credible sexual harassment and misconduct allegations, it is clear that Governor Cuomo has lost the confidence of his governing partners and the people of New York,” Sens. Chuck Schumer and Kirsten Gillibrand said in a joint statement late Friday afternoon. “Governor Cuomo should resign.”

Reps. Alexandria Ocasio-Cortez and Jamaal Bowman released a joint statement earlier Friday, saying Cuomo “can no longer effectively lead in the face of so many challenges.” Before Friday, only one House Democrat from New York, Kathleen Rice, had called for Cuomo’s resignation.

Here’s what we know about the accusations against the 63-year-old New York governor and the response so far:

The most recent allegation of harassment is from an unidentified aide to Cuomo. The Times Union of Albany reported this week that the aide told another employee that the governor groped her at his mansion last year. Cuomo has also been accused by a former aide of kissing her nonconsensually and by another of asking personal questions about dating and sex. Other women, specifically younger women, told the New York Times that Cuomo’s executive office was “chaotic, unprofessional and toxic.”

In a news conference Friday, Cuomo denied all allegations and said he would not resign.

“I never harassed anyone. I never abused anyone. I never assaulted anyone, and I never would,” Cuomo said. “People know the difference between playing politics, bowing to cancel culture and the truth.” While denying claims of harassment, he previously said his actions could have been seen by others as “unwanted flirtation.”

The other major issue Cuomo is facing is criticism of his handling of the spread of COVID-19 in the state’s nursing homes. Last month, Cuomo admitted that a top aide had knowingly withheld nursing home data. It also became clear that Cuomo gave the green light for already overwhelmed nursing homes to admit COVID-19 positive patients.

The calls for Cuomo to resign have been growing in recent weeks, with Schumer and Gillibrand the latest to add their voices on Friday.

“Gov. Cuomo has lost the confidence of the people of New York,” Nadler, the chair of the House Judiciary Committee, said in a statement. “Gov. Cuomo must resign.”

Fifty-nine Democratic state leaders issued a joint statement Thursday saying they have lost trust in Cuomo’s leadership and calling on him to step down.

“As legislators and as New Yorkers we all must decide what is best for the future of New York State,” the statement read. “The budget, the fight against COVID-19, and restarting the economy all demand clear and trustworthy leadership. In light of the Governor’s admission of inappropriate behavior and the findings of altered data on nursing home COVID-19 deaths he has lost the confidence of the public and the state legislature, rendering him ineffective in this time of most urgent need.”

Additionally, roughly 20 Republican state senators and 38 Republicans in the assembly have called for his resignation.

If Cuomo resigns or is impeached, Lt. Gov. Kathy Hochul would step in to take his place until the end of his term, which lasts until the end of 2022, according to the New York State Constitution.

Cuomo agreed to refer the accusations to the office of the state attorney general, Letitia James, who has appointed two lead attorneys to the investigation.

“We are committed to an independent and thorough investigation of the facts,” a statement read. “This work will be comprised of — but not limited to — issuing subpoenas and related compliance; examination of relevant documents and records; interviews, including formal depositions; and analysis of data and information pertinent to the investigation.”

On Thursday, the New York Assembly authorized an impeachment investigation into the sexual misconduct allegations, independent from James’ investigation.

Cuomo has urged people to wait for the results of the investigation, and some other elected officials who have not called on him to resign have said the same.