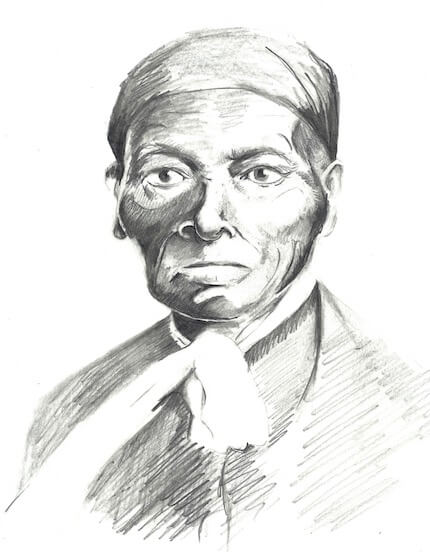 The Biden administration announced on January 25, 2021, that it would accelerate the process of adding Harriet Tubman’s portrait to the $20 bill. The previous administration had sidetracked the plan to, for the first time ever, put a Black woman on paper money. But the American people spoke, and now the slave holder will be replaced by the abolitionist on the twenty. People might just start saving money again, reluctant to part with the first batch of Tubmans issued by the treasury.

Subject of a major Hollywood film in 2019, Tubman’s legend continues to grow. On Wednesday, Feb. 24 at 4p, I will give a slideshow and lecture on Tubman’s life and legacy for the Orangeburg Library, via Zoom. As a preview, here are 5 facts that you might not know about our modern Moses and her impact on the people she risked her life to liberate.

According to the King’s Apron blog of Chef Zu, Harriet Tubman was educated in foraging by her grandmother, Modesty, her cook mother, Harriet “Rit” Ross, and her lumberjack father, Ben Ross. 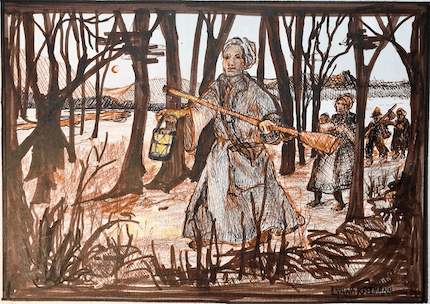 During frosty weather, they depended on acorns and varieties of wild nuts to sustain themselves. To keep babies from crying and attracting attention, Harriet dosed their bread with homemade herbal tinctures of opium poppies to put them to sleep. While the woods were rich with resources like sassafras, black cherry, and paw-paw, not everything was safe to eat. Harriet had to know certain characteristics of plants.

Tubman would later use her knowledge of herbal remedies to cure Union Army troops of dysentery. 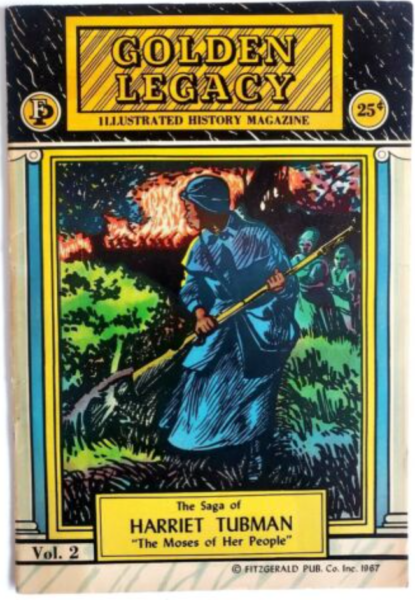 Tubman was struck by heavy lead weight thrown by an overseer at another slave. She later described the grievous injury to Emma Telford, who published and article  Harriet: The Modern Moses of Heroism and Visions in 1911:

The weight “broke my skill and cut a piece of that shawl clean off and drove it into my head. They carried me to the house all bleeding and fainting. I had no bed, no place to lie down on and all, and they lay me on the seat of the loom and I stayed here all that day and the next.

From that day on, she reported bouts of a lethargic sleep that would come over her. According to author Catherine Clinton, these episodes were experienced as “powerful visions. waking dreams that she felt were sending her messages.” She would fall into a stupor, which might come upon her “in the midst of conversation, or whatever she may be doing, and throwing her into a deep slumber, from which she will presently rouse herself, and go on with her conversation or work.” 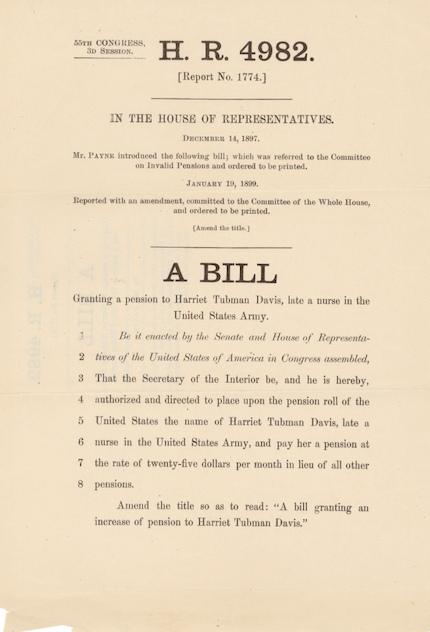 She Had to Fight for Her Civil War Pension

For years, considered ineligible for a pension at the hands of a paternal Government on account of her sex, it was not until a few years ago that through the efforts of Sereno Payne, chairman of the Ways and Means Committee of the House, she was granted by special act of Congress a pension of $20 a month in recognition of her ‘valuable services as nurse and scout during the War of the Rebellion.’

After submitting an affidavit, and other letters of support and documents, House Resolution 4982 granting her pension was passed on Jan. 19, 1899–after 2 years of debate. 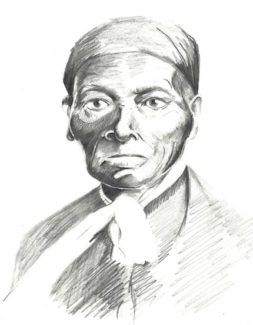 A slideshow and lecture by Bill Batson

Sponsored by the Orangeburg Library. Click here to register

Frederick Douglas was born in Talbot County, adjacent to Dorchester, the county where Tubman was born. Douglass escaped slavery, taught himself to read and write, and became one of the most powerful public orators and civic leaders in 19th century America. The 2 were contemporaries who held each other in high regard.

A letter from Douglass was published in 1869 in Sarah Hopkins Bradford’s authorized biography, Scenes in the Life of Harriet Tubman.

The difference between us is very marked,” Frederick Douglas wrote. “Most that I have done and suffered in the service of our cause has been in public, and I have received much encouragement at every step of the way. You, on the other hand, have labored in a private way. I have wrought in the day – you in the night. I have had the applause of the crowd and the satisfaction that comes of being approved by the multitude, while the most that you have done has been witnessed by a few trembling, scarred, and foot-sore bondmen and women, whom you have led out of the house of bondage, and whose heartfelt, “God bless you,” has been your only reward.

There must have been something very powerful in the soil and water of eastern Maryland to produce 2 of the most extraordinary Americans, both born enslaved, both self-liberated, and both eventual national figures who helped liberate their people. 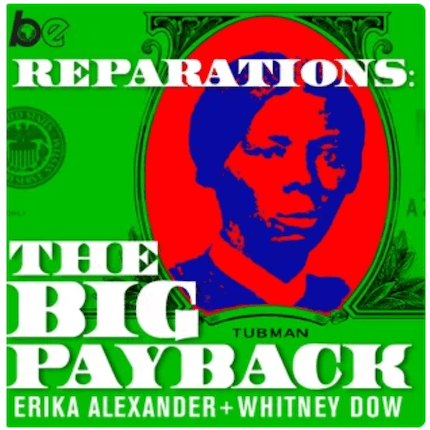 In March 2020, Dr. Rashawn Ray, a Fellow at The Brookings Institute, testified on behalf of the Harriet Tubman Community Investment Act before the  Maryland General Assembly’s Health and Government Operations Committee. Before the bill died in committee, Dr. Ray gave 3 thoughtful arguments for reparations.

The form of reparations that Dr. Ray recommended for consideration were: tuition remission and student loan forgiveness; housing down payments and housing revitalization grants; and business ownership grants.

The United States Congress is currently holding hearings on H.R.40, introduced in 2019 by Rep. Jackson Lee, Sheila [D-TX-18] that would establish a commission to study and develop reparation proposals for African-Americans. 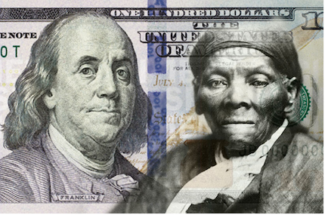 When the new $20 bills go into circulation, Harriet Tubman joins Abraham Lincoln, George Washington, Ben Franklin and Franklin Delano Roosevelt in the smallest circle of honor in our country, the currency club.

But unlike her colleagues, Harriet Tubman’s life has not been given the same level of serious academic examination. Rebecca Beatrice Brooks of The History of Massachusetts Blog observes that “although there have been scores of children’s books published on Harriet Tubman, there are few full scale biographies for adults.”

Maybe now, true to form, Americans will keep the mind their Tubmans, and Harriet Tubman on their mind.

My slideshow and lecture on the life and legacy of  Harriet Tubman will be available of Zoom on Wednesday, February 24th at 4p. You can click here to for the program sponsored by the Orangeburg Library.

Bill Batson is an activist, artist and writer who lives and sketches in Nyack, NY. “Nyack Sketch Log: It’s all about the Tubmans” © 2021 Bill Batson.